The Drill, Due West Festival (VIC) 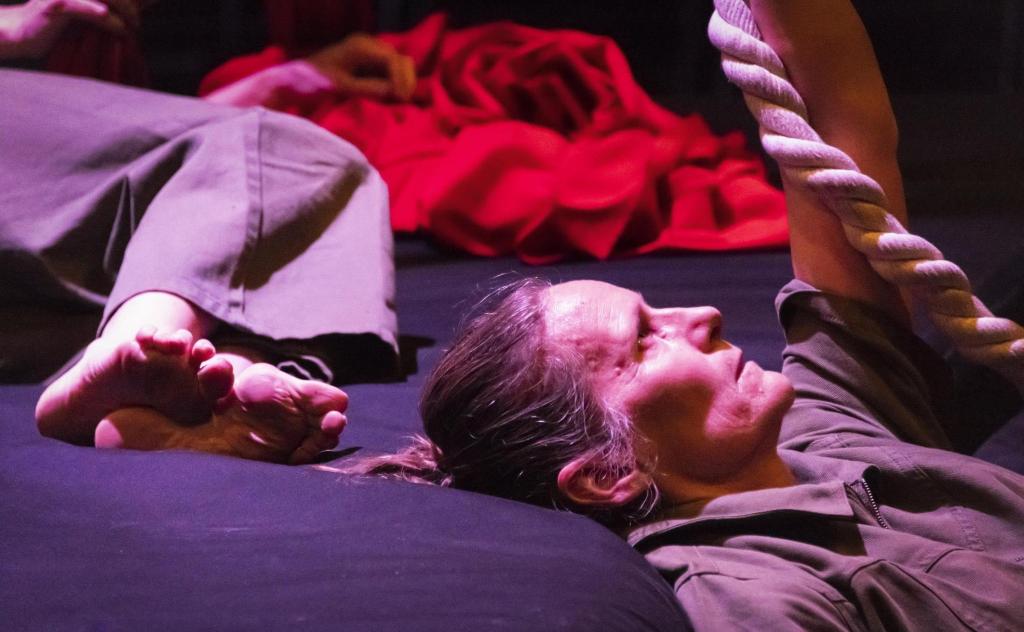 The latest production from Women’s Circus draws from the history of the troupe’s home at Footscray Drill Hall, constructed in 1914 as a military training facility for WWI conscripts. Over a century later, the site now houses Snuff Puppets and Women’s Circus, which itself has evolved since it was founded in 1991 to include anyone who identifies as or has lived as a woman, or identifies as non-binary. It’s quite a lovely symbol of how things have changed.

Like past shows from Women’s Circus, The Drill is an explicitly feminist work focused on the stories that are often left out of history books. But unlike previous offerings, this production is an immersive, interactive experience that knits together – more on knitting later! – circus, theatre, and art installation into a site-specific historical journey.

It’s certainly an ambitious project, and the results are visually impressive, transforming the cavernous hall into a series of unique spaces – hospital ward, bunker, kitchen, dance marquee – each presenting a different aspect of wartime history. Some of the sets are quite striking, such as the ‘knitting room’ which features knitted drapery and stacks of drawers atop one another, mimicking the precarious, elastic constructions of acrobalance. The sensitive sound design features archival recordings and moody music while the performers’ costumes – onesies and overalls in drab tones of grey, beige, tan and khaki – continue the vintage military feel.

Each audience member will experience at least three of the six main storylines. On my route, this included an absurdist solo clown routine that, while quietly tragic, felt a tad overextended; a tangled scene in the knitting room that offered a gently humorous angle on the lives of women left behind during the war years; and a larger scale performance involving a giant ball of red yarn. This last routine was a beautiful evocation of collective labour, loss, and grief, using aerial skills on rope and silks and the underrated art of falling to portray a sense of immeasurable waste.

Unlike other immersive experiences, The Drill isn’t a self-directed journey, and the available routes seem a little unequal. That risks some audience members feeling a bit cheated, though Women’s Circus is offering a discounted ticket for returning participants so you can complete the journey. Overall, audience interaction is fairly limited, and some of the interactive elements – such as dance lessons in the outdoor marquee – feel like intermission entertainment rather than a fully integrated part of the production.

The Drill also doesn’t offer a whole lot of narrative, or breathtaking physical feats. It’s more a series of atmospheric, artistically choreographed vignettes – still compelling, but audiences looking for a more traditional circus high or theatre buzz might be disappointed. The lack of plot and character building also means that instead of seriously digging into ‘untold stories’, some scenes can feel like stereotypes of what white women were doing during the war.

Nonetheless, The Drill is charged with humour, camaraderie and joy. There is something very powerful about seeing so many women and non-binary performers of all ages – the youngest is a six-month-old baby – engaged in this level of physicality. In several scenes, the production uses knitting as a metaphor for embodied cooperation, and it’s an apt and memorable image of strength, flexibility and working together to build something bigger.