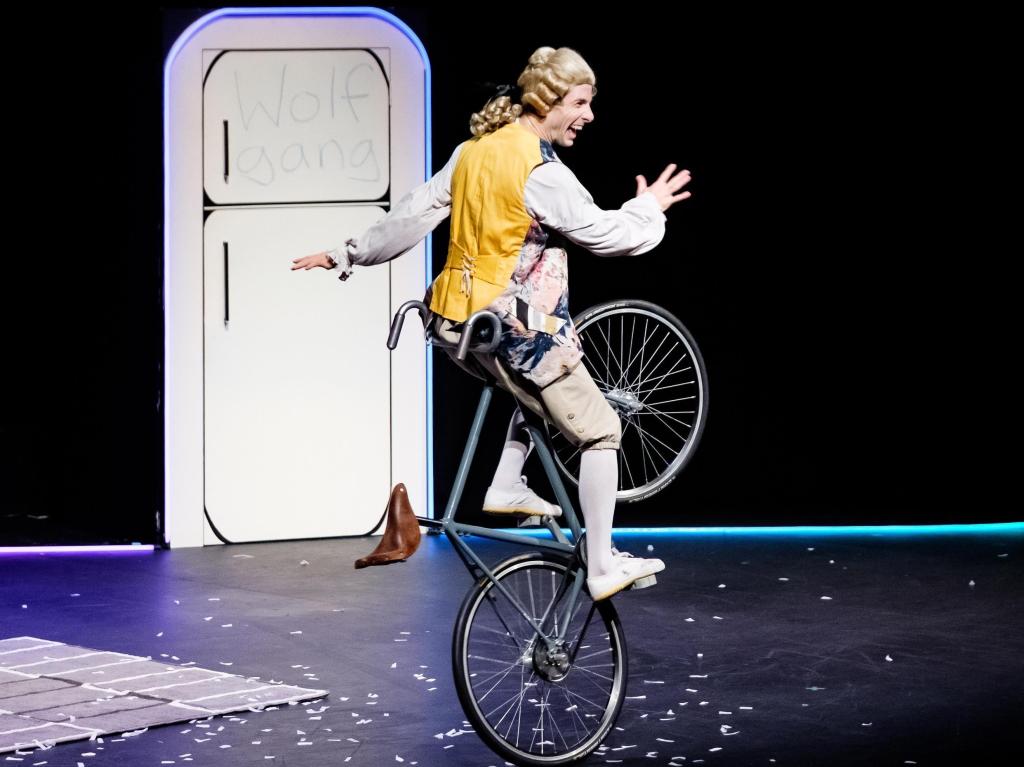 Circa, the wonderful company based in Brisbane, have brought their latest show, Wolfgang’s Magical Circus, created by Yaron Lifschitz with Benjamin Knapton, to the Opera House.

Wolfgang’s Magical Circus is a fantastic family-friendly physical comedy show filled with incredible circus by Circa.

The set design is deceptively simple – consisting of a few chairs and tables, two doors, and a mat with a geometric design centre stage. There are also two black shrouded mysterious objects that are eventually revealed to be the bike, and the other music stand.

The show begins with lonely birthday girl, Kathryn O’Keeffe, morosely slumping in a chair and discovering a record of classical music.

Suddenly the be-wigged, frockcoated, exuberant and playful Mozart, played by Paul O’Keeffe, appears. In this show we see the young, brattish, boisterous side of Mozart.

Although the show appears improvised, it is, in fact, tightly choreographed. There are some incredible lifts, tumbling, balancing and juggling segments – such as slapstick with a collapsing music stand and a jaw dropping bike riding segment – there is also a short classical ballet segment with pointe work and Balanchine-like partnering.

There is audience participation and at times Mozart dashes madly around the audience. There is also a slow motion sequence of a fight that turns into a reconciliation. There is a funny segment with a mischievous lighting spot that will NOT stay put when Mozart wants to do a backflip. Another highlight in Wolfgang’s Magical Circus is the dangerous chair balancing segment towards the end of the show.

The cast of  Wolfgang’s Magical Circus. Photo by Clare Hawley.

At the performance I attended the age ranged from adorable moppets, not quite one-year-old to grandmas and everything in between. The children in the audience were absolutely rapt and laughed heartily at the slapstick comedy.

There was tremendous cheers and applause at the end. Wolfgang’s Magical Circus is highly entertaining and is enjoyable for all ages. Go on, indulge your inner child and treat yourself to this wonderful show.