The power of this exhibition lies not just in the strength of the art works or fine curation but in the legacy of history.
Mem Capp
[This is archived content and may not display in the originally intended format.] 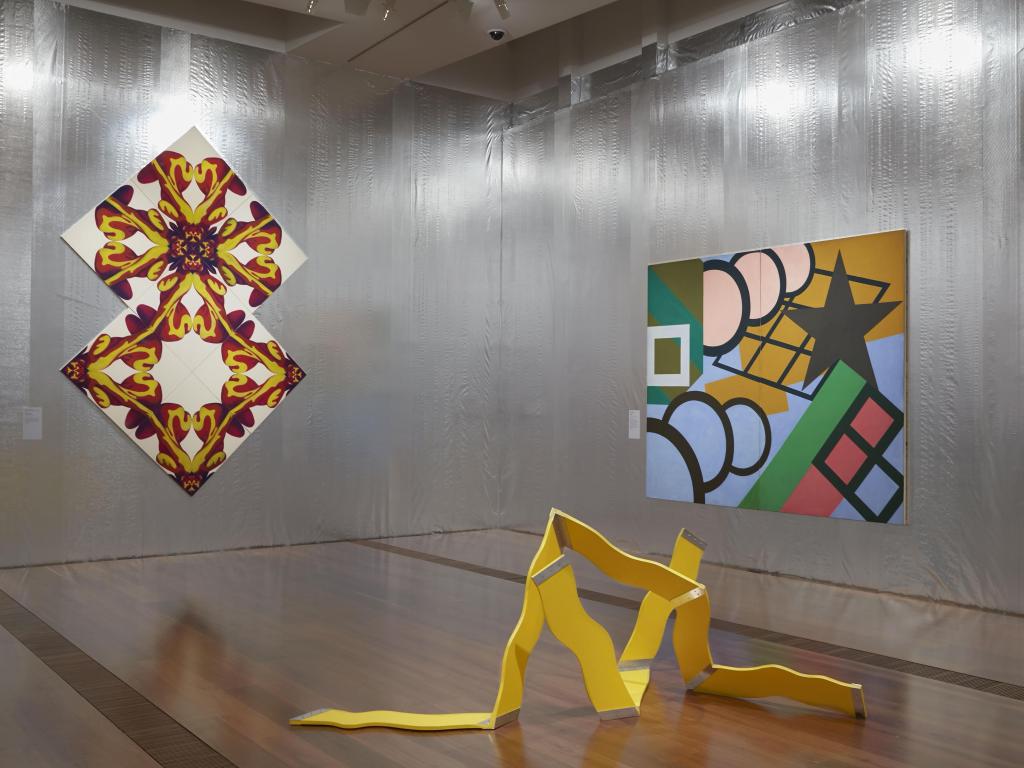 A time capsule of another age The Field Revisited, currently showing at the NGV Federation Square, marks the 50th anniversary of the seminal 1968 exhibition The Field which was to change the landscape of contemporary Australian art.

It was curators John Stringer and Brian Finemore, at the then newly opened NGV in St Kilda Road, who shifted the prevailing paradigm of figurative and landscape art towards a more abstract minimal aesthetic; capturing the growing out-ward looking, international focus of a generation of young artists. The first comprehensive display of colour field painting and abstract sculpture, The Field showcased 74 works by 40 artists who produced art that was largely flat, abstract, patterned and geometric in style. Also controversial was the fact that many of the works chosen were by young emerging artists, some had never held a solo exhibition let alone exhibited in a major institution.

What makes The Field, past and present equally fascinating is how the curators captured the zeitgeist of the times. Stepping into the exhibition one might be forgiven for momentarily imagining you are in the modular confines of the space ship Enterprise or lost in space with its reflective silver foil-like walls and pulsing canvases like control panels leading us into a new dimension. Dale Hickey’s large untitled (1967) oil painting on canvas featuring repetitive geometric patterns in yellows and greys demands the views attention on entering the exhibition space. Based on a quilt pattern found on a bedspread Hickey subtly plays with shadow to create mesmerising optical effects.

‘The space race’ however was not the only influence on the arts of the time. The 1960s was the era of protest and counter-culture; this experience of psychedelia is reflected in Vernon Treweeke’s work Ultrascope 6 (1968) (remade 2015-18), an inkjet print on canvas. Known for his abstract eroticism the painting throbs with life, its large diamond shaped canvas in which four pulsing diamonds in purples, reds and yellows reflect a mind altering experience. Rollascape 2 (1968), synthetic polymer paint on composition board by Janet Dawson is a protest to the confines of the rectangle as its large monochromatic waves in  primary yellow roll across the wall. The inclusion of Dawson in The Field exhibition, along with only two other women is a reminder to contemporary viewers of the cultural norms of the day and the slow move towards greater gender equality.

The American artist James Doolin who taught in Australia between 1965-67 as well as the travelling exhibition in 1967, Two Decades of American Painting from the Museum of Modern Art, that had a lasting influence on the fledgling contemporary art scene in Australia at the time. Included in the exhibition is Doolin’s painting Artificial landscape 67-6, (1967), synthetic polymer paint on canvas, a fine example of his minimalist aesthetic and interpretation of urban imagery in which foreground and background become one with street scenes and signs reduced to carefully painted circles, semicircles and subtly graduating strips of grey.

Other important influences acknowledged in the curation of the exhibition are the scientific and technological advances of the time that allowed artists a means to explore new materials and approaches in their art-making. Phoenix II (966) by Mike Kitching is an example of how new materials directed his approach to mould, heat and bend coloured perspex and combine it with aluminium and synthetic polymer resin. The new development of faster drying acrylic paint also meant that the artist could work and rework their art more quickly, achieving a variety of textures and finishes. According to the original exhibition catalogue acrylic paint was used in over 60% of the featured works.

Although not in its original gallery setting the curator Beckett Rozentals (Australian painting, sculpture and decorative arts to 1980) and co-curator and NGV Director Tony Ellwood have meticulously recreated the original exhibition using many of the original 74 artworks. Through commissioning surviving artists to remake lost or damaged work along with specially designed silhouettes on the gallery walls to signify works that could not be found the original curators’ intent and design have been acknowledged.

A retro-type niche between gallery spaces provides added interpretive support material for the works on show with a series of screens exploring the evolution of paint technology and a video interview with artists, complimenting the usual didactic panels and labels. Catalogues from both exhibitions can also be found in the different gallery spaces with thoughtful design allowing for comfortable movement between rooms.

A carefully recreated and finely curated exhibition that presents and explores the impact of a significant period in contemporary Australian art history.