The explosive chemistry between China’s past and present is the focus of the latest Melbourne Winter Masterpieces exhibition.
Jinghua Qian
[This is archived content and may not display in the originally intended format.] 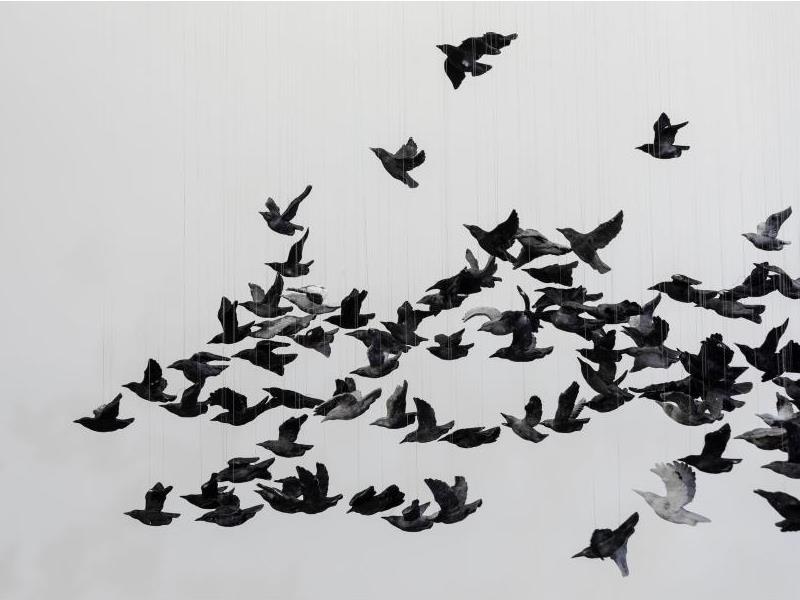 Cai Guo-Qiang is a superstar Chinese contemporary artist now based in New York. Many Australians will know his name from his 2013/2014 exhibition at QAGOMA, Falling Back to Earth. That show involved 99 life-size replicas of wolves, while this current exhibition includes a flock of 10,000 porcelain starlings.

Cai’s works are typically grand in scale and intriguing in their execution. Many involve gunpowder and fireworks: either an actual, fleeting spectacle in the sky – such as the 8-minute display that opened his 2014 show, The Ninth Wave, or the fiery ascent documented in the 2016 documentary Sky Ladder – or paintings created by igniting pigmented gunpowder, as can be seen in this exhibition.

The latter works are visually arresting in their own right, particularly Pulse (Mountain) (2019) in this exhibition, but made more impressive when you see the pyrotechnic process behind them. Most of the works created for this exhibition were realised in Melbourne, and the video footage of Cai and his team detonating various things in a warehouse in Williamstown, displayed at the end of the exhibition, is an obvious crowd pleaser.

The NGV exhibition is a double presentation that combines the contemporary commission, Cai Guo-Qiang: The Transient Landscape, with an exhibition of ancient cultural relics from China’s Shaanxi province, Terracotta Warriors: Guardians of Immortality. It is an intuitive and thoughtful pairing of past and present, especially as all of Cai’s works are purpose-made for this show.

The contemporary works speak to a sense of lineage, either in their visual language which references the moody, brushstroke style of traditional sanshui landscape paintings and the peony motif popular in Chinese women’s fashion; or through their use of materials: each piece showcases purported Chinese inventions like gunpowder, paper, porcelain and silk, while also – literally – setting them on fire.

The delicate and somewhat gothic porcelain birds lead the way as you step into the exhibition, blooming darkly overhead while six video panels in the entrance hall show shifting sands slipping, melting, washing and fading over images of the larger-than-life terracotta warriors. The installation of starlings is titled Murmuration (Landscape) in English, but the Chinese title – niao yun, or bird cloud – is more literal, yet equally evocative.

The birds – crafted in Dehua, near Cai’s hometown of Quanzhou in Fujian province – inspire appreciative contemplation in the entrance hall, but as they gather into a flock in the same room where the 2,000-year-old terracotta warriors stand, there is something a little menacing about this army of starlings. The image conjures both ‘the haunting shadow of China’s imperial past’ and ‘a mirage, an exoticised imagination of the cultural other’, as Cai suggests in his catalogue notes. It also foregrounds the manufacturing force required to execute grand creative visions like those of Cai, his contemporaries like Gu Wenda (b. 1955) and Zhan Wang (b. 1962), and of course, the emperor Qin Shi Huang, 2,200 years earlier.

The relics portion of the exhibition is enjoyable even if you have spent a few too many hours in Chinese artefacts museums, as I have, as the selection of more than 150 objects contains several distinctive aesthetic and thematic narratives without overwhelming the viewer.

The terracotta warriors themselves were apparently first shown in Melbourne in 1982 (just a few years after they were unearthed in 1974) and up close, almost sweating under the bright white lights, they lack the impact that they have when standing en masse in an open pit in Shaanxi. But the details are glorious, from the creases in their sleeves to the individual variations in stance and features, and the mirrors in the display cleverly draw the viewer in among their ranks.

The exhibition is enriched by the inclusion of relics from the Han dynasty, which followed the Qin, illuminating how the incoming government adjusted its arts policy with lower taxes and more modest funerary commissions. A week after the Australian federal election, it is quite entertaining to imagine the policymakers of ancient China battling similar issues.

‘The two exhibitions act as rivers of time separated by two millennia, each coursing at their individual speeds across the same spaces,’ Cai writes in the catalogue. ‘The ancient and the contemporary – pulling, corresponding and complementing each other. The Transient Landscape explores the invisible world. I want to evoke the sombre tone of the mountains, cypress trees and peonies to allude to the tragedies of life, of a nation and an empire.’

A cynic might notice a murmuring stream of Chinese nationalism beneath this pairing. The double exhibition certainly proffers a sort of proof of cultural continuity from China’s ancient civilisations to contemporary fine arts practices. But – particularly given Shaanxi’s geographic position in the multi-ethnic, multi-faith heartland of central China, where Islam is a very visible cultural influence (and to a lesser extent, Judaism) – I wonder if putting ancient relics alongside Cai’s work, which draws more specifically from ‘Eastern philosophy’, is a subtle form of Han-washing: synthesising and sinicising the past into something more coherent.

That said, there is something quite magical in how the two exhibitions work in tandem to play with permanence and ephemerality, past and future, and life and death. It’s glorious to look at, nourishing to ponder, and deeply haunting, dripping with pride and anguish. As the first Melbourne Winter Masterpieces exhibition to have a non-European focus, it sets a high bar for where this series can go.