MTC: A story of returning, reconnecting and belonging, Lally Katz’s hybrid of melodrama and magic realism never quite finds its feet.
Richard Watts 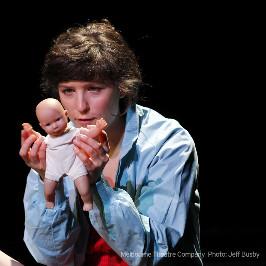 Set in Tathra, a quiet seaside town on the NSW south coast, Lally Katz’s Return to Earth tells the story of Katz-substitute Alice (Eloise Mignon) as she returns home after a mysterious absence and seeks to reconnect with the life she left behind.

Tragedy has struck in Alice’s absence, adding tension to her relationships with her mother, Wendy (Julie Forsyth), father Cleveland (Kim Gyngell), brother Tom (Tim Ross) and young niece Catta (played on opening night by Allegra Annetta). Her former best friend Jeanie (Anne-Louise Sarks) has grown up and grown distant. Even the fisherman Alice begins a new relationship with keeps her – at least initially – at arms length.

Complicating matters further, during her absence from the family home Alice appears to have forgotten basic motor functions such as how to chew her food. Simple routines such as setting the table now elude her. Has she always been this scatty? Has she been institutionalised? Where did she go, when she went away?

Katz offers few answers in this skittish production, and when she does, they are rarely satisfying.

There is no doubt that Lally Katz is an important playwright with a unique voice, but Return to Earth is not her best work. Earlier plays such as The Black Swan of Trespass (2003) and The Eisteddfod (2004), originally written for independent theatre company Stuck Pigs Squealing and later restaged at the Malthouse Theatre, revealed a playwright who could blur the boundaries between reality and fantasy with aplomb while very deliberately playing with notions of theatrical reality – themes she went on to explore with great success in Goodbye Vaudeville Charlie Mudd, the winner of the 2009 Victorian Premier’s Literary Award for Drama. More recently, the minimal, magnificent A Golem Story, staged at the Malthouse in June this year, displayed Katz’s maturing talent.

Originally written in 2006, and further developed and presented as part of PlayWriting Australia’s National Play Festival 2009, Return to Earth lacks both the startling imagination of Katz’s early work and the fine-tuned control of her more recent plays. It’s very much a transitional work, and sadly, an inferior one.

Its comedy falls flat – I did not laugh once during its one hour and forty minutes running time, though admittedly many of the opening night audience around me did – and the story’s more melodramatic moments border on bathos. Nor is its combination of magic realism and melodrama ever entirely successful: early scenes are reliant on gentle domestic details which, while sweetly observed, are far from compelling, while a wild flight of fancy which comes late in proceedings feels overwrought and frankly, unnecessary. Like oil and water, the play’s component parts never successfully blend.

Performances are generally strong, though Mignon, in the lead role, grated at times as a character far less emotionally mature than her peers. Forsyth occasionally overplayed her character’s moments of enthusiasm, but as the laconic fisherman, Theo, Anthony Ahern shone.

Aidan Fennesy’s direction is static and conservative, in keeping with the realist elements of the play perhaps, but definitely at odds with its occasional flights of fancy. A revolving stage was occasionally used effectively, but more often demonstrated all too literally that characters were moving on or being left behind.

Lisa Mibus’s lighting, at times subtle, at other moments otherworldly, is exquisite; the highlight of the work. Kelly Ryall’s sound design is restrained and evocative, and Claude Marcos’ set, which includes a reproduction of Katz’s imagined Tathra in miniature elevated at the rear of the stage, is charming. As strong as they are, however, sadly such elements are not enough to ensure a successful or compelling production.