The old, the new, the obscure and the odd.
David Barmby 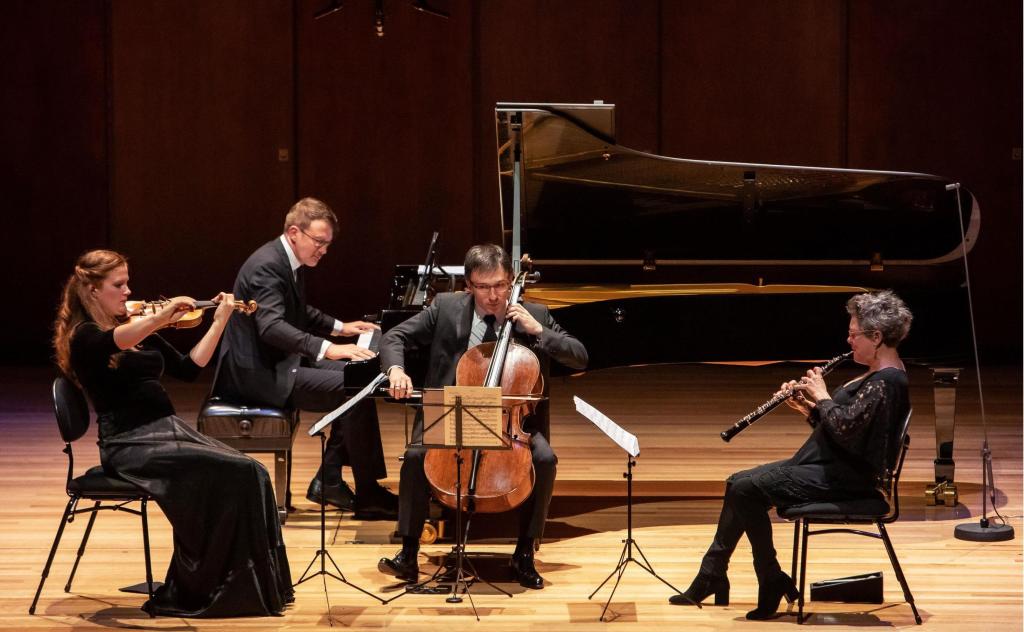 By a lucky chance this opening concert in Musica Viva’s 2021 Season, Diana Doherty & Streeton Trio was anticipated in Sydney with a retrospective of the great Australian Impressionist artist at the Art Gallery NSW. The cool elegance of the Streeton Trio (Emma Jardine, violin, Umberto Clerici, cello and Benjamin Kopp, piano) on the ensemble’s first tour for Musica Viva was spiced by the addition of the brilliant Australian oboist, Diana Doherty.  However, the success of this unusual combination was difficult to assess.

‘The ensemble’s first tour for Musica Viva was spiced by the addition of the brilliant Australian oboist, Diana Doherty.’

It would seem that the genesis of the program arose from Czech/French/American composer Martinů’s Oboe Quartet of 1947 scored for piano trio and oboe, written to order and first performed by the Mannes Piano Trio and Mitchell Miller while Martinů was teaching at the Mannes School of Music in New York. This ensemble was not revisited by the composer. But the former artistic director of Musica Viva chose to double the repertoire for this combination by commissioning a new work from West Australian Lachlan Skipworth. Wedged in between these two works was Smetana’s tragic and powerfully Romantic Piano Trio in G minor, Op 15, by many lengths the most satisfying work offered.

The concert was a unique event with several ‘firsts’: the first national tour in Musica Viva’s 2021 season, the first concert with the organisation under the new artistic directorship of Paul Kildea and a return to live performance for many in the audience after the relaxing of the lockdown rigours of the 2020 COVID pandemic. Kildea in an introductory note described this unusual program as comprising the old (Smetana), the new (Skipworth) and the obscure (Martinů), a curious combination indeed.

Martinů’s Oboe Quartet is a peculiar hybrid. It remains the only known work for this combination of instruments before Skipworth was commissioned for the present tour. I imagine that this is because there are two very different upper instruments (violin and oboe) that compete for attention, unable to blend with one another without effort. Nonetheless, in the Martinů Emma Jardine did her utmost as Diana Doherty’s quirky soloistic part bubbled along.

The centrepiece of the program was Smetana’s tragic and profoundly Romantic Piano Trio in G minor written as a response to the death of his daughter. From the opening aching violin solo, following through to the beautifully balanced and weighted piano with perfectly matched expressive resonance of the cello, it was clear that we were hearing one of the finest and best-seasoned ensembles of the piano trio genre in Australia.  Notable was the Finale demonstrating matchless technique across the ensemble, providing a perfect stage for triumphant restitution and hopeful resolve.

‘The concert was a unique event with several ‘firsts’: the first national tour in Musica Viva’s 2021 season, the first concert with the organisation under the new artistic directorship of Paul Kildea and a return to live performance for many in the audience.’

There was nothing particularly ‘new’ about Lachlan Skipworth’s Oboe Quartet other than that it was written last year.  In three movements it opens with sentimental and filmic lyricism. The second movement, Mysterioso, molto rubato is perhaps meant to emulate the fifth movement of Messiaen’s Quartet for the End of Time, ‘Praise to the eternity of Jesus’ also written for cello and piano, difficult to place without, for instance, Messiaen’s distinctive harmonic palette. The final movement provided five beats in a bar and rhythmic displacements for entertainment, leaving us barely satisfied. Notable was the superb pianism of Benjamin Kopp even when challenged with realising the score’s limited material.

It was then, as a gratefully received encore that we heard a really odd addition to the program, an arrangement for this combination of instruments by Alexandre Oguey of Brahms’s Rondo alla Zingarese from the Piano Quartet No 1. If only we could have heard the original with the Streeton Trio augmented by a guest viola.