A thrilling, moving version of ‘Man of La Mancha’ has erupted onto the small Reginald Theatre stage at the Seymour Centre setting it alight.
Lynne Lancaster
[This is archived content and may not display in the originally intended format.] 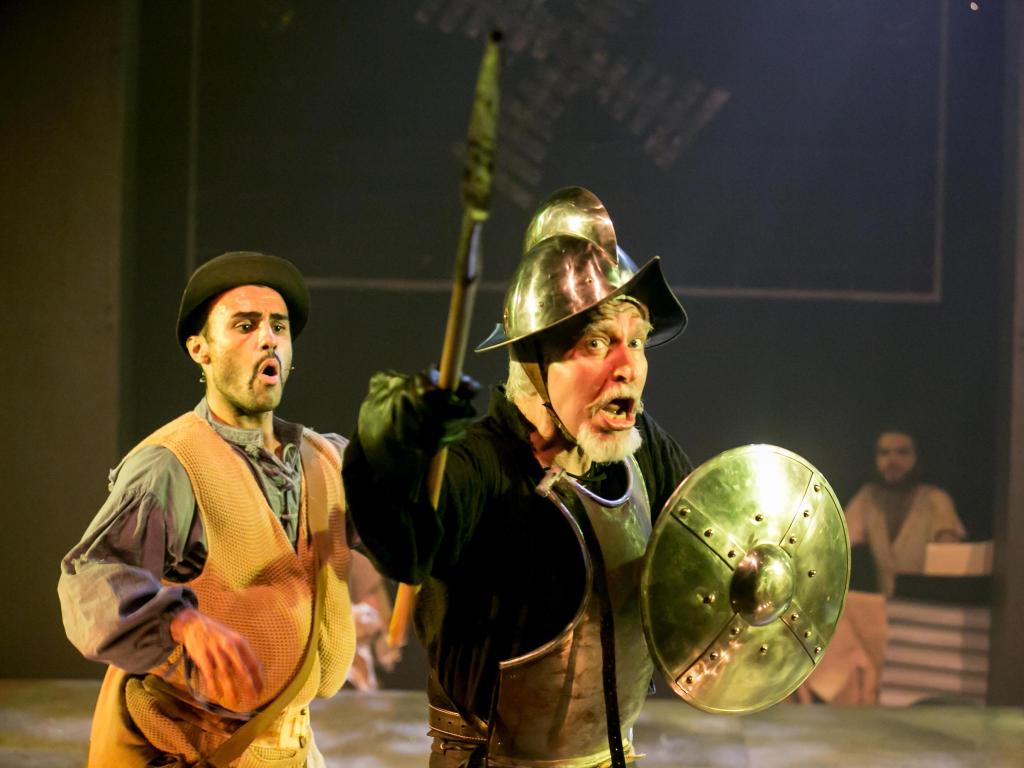 It is now 50 years since Man of La Mancha was first performed. A play within a play, it tells the story of the mad knight Don Quixote desperately, nervously performed by Cervantes (poet, actor, tax collector) and his fellow prisoners as he awaits trial by the Spanish Inquisition (cue ominous door crashes). It is not a faithful adaptation of Don Quixote the book, or of Cervantes’s life and doesn’t set out to be. Slapstick comedy (think commedia delle-arte or Shakespeare) is blended with searing, painful, and dark moments, asking some of the Big Questions in life: Why are we here? Where would we be without love?

The flexible yet cluttered set by Simon Greer, resembles a junk heap and in some ways is similar to that for ‘Cats’ with movable benches and a dirty bathtub. Under the direction of James Jay Moody the fluid scene and character changes are  very well done. There is no orchestra as such, the exuberant cast playing assorted instruments (accordion, tuba, guitar), with the atmospheric lighting by Benjamin Brockman tremendous.

The ‘tilting at windmills’ scene early in the show is effectively done with screens, shadows and lighting. Other highlights would have to be the tavern brawl, the scene where the gypsies rob Don Quixote and the Knight of Mirrors and companions in their particularly spectacular costumes .

Tony Sheldon as Cervantes and Don Quixote is magnificent and he performs with enormous relish. He brings depth and profundity to the role of the confused, maddening characters, with lashings of debonair charm. In answer to Aldonza’s question Why? his show stopping rendition of the worn crooner anthem ‘To Dream the Impossible Dream’ starts off haltingly, as if gathering his thoughts, then soars triumphantly. He is fragile, yet immensely dignified as the elderly Don.

As Sancho Panza, Ross Chisari is brilliant in Shakespearean comic servant mode, combining naughty charm and slapstick. He is also choreographer for the production and does a sterling job.

Marika Aubrey as Aldonza (Dulcinea) brings a bright timbre to her performance and is splendid as the cynical, world weary, charismatic and fiery troubled lady. There is a lot of emphasis in the show about her struggle for goodness – will she ever succeed?

Humour is brought to to the heavy roles of cell boss and innkeeper by Laurence Coy and also in the ensemble mention must be made of strong vocal solos from Stephen Anderson as Quixote’s housekeeper and Glenn Hill as Padre Perez.