Even these naughty versions of the Muppets retain their more famous counterparts’ unwillingness to offend.
Aleksia Barron 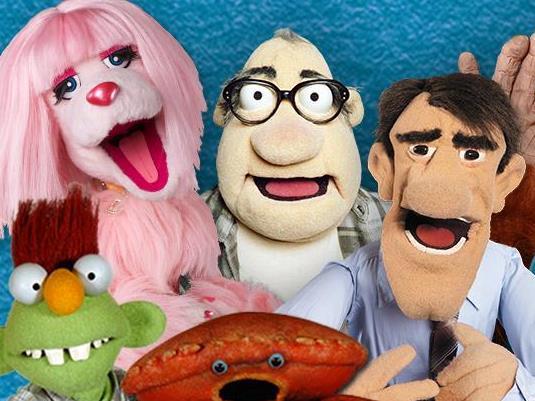 Jim Henson’s iconic Muppets may be known for their whimsical, almost achingly innocent style of comedy, but the puppet master also had a saucy streak, which now lives on in the form of Henson Alternative’s Puppet Up! Uncensored show. Created by Brian Henson (son of Jim and Jane Henson, and director of The Muppet Christmas Carol, easily the most underrated film in the Muppet cinematic canon), Puppet Up! combines puppetry with improv comedy. It should probably be a disaster, but it isn’t. It should probably also be a bit sharper and naughtier, but again, it isn’t.

The show is hosted by co-creator (and former Groundling) Patrick Bristow, who commands a cast of a half-dozen puppeteers to ‘Puppet up!’ and improvise various scenes, ranging from a spoof James Bond theme song to a children’s bedtime story. It’s a slick production with solid production values – a video camera positioned a couple of feet above head height broadcasts the ‘puppet show’ onto two large screens, while the puppeteers manipulate their puppets and improvise the comedy, all the while keeping an eye on the camera monitor to make sure they’re keeping things looking good on screen. It’s no mean feat, as an audience member discovers when invited to have a go. An inexperienced puppeteer equals very disturbing puppet movements.

As talented as the Henson Alternative performers are, this is essentially a show powered by improv comedy, and hence relies on its audience-supplied material… which, unfortunately, was particularly atrocious at this particular performance. Everyone loves an uncensored show, but risqué humour quickly turns passé when loudmouth audience members are constantly screaming about sexually transmitted diseases and self-pleasure when asked for topic suggestions.

However, even if the audience had yelled out better suggestions, Henson Alternative don’t seem to be the sort of troupe to pull off truly dangerous comedy. In this world, an uncensored show means that there can be a bit of swearing (even a c-bomb, gasp!) and some rather problematic topics used as comedic fodder, but most of the laughs come from the shock value of seeing a puppet curse, not any sort of skillful joke construction. Even these naughty versions of the Muppets retain their more famous counterparts’ unwillingness to offend. The end result is pleasant and frothy, and a good MICF option for those who prefer their naughty humour sans bite, but it isn’t quite a top tier show.

Aleksia is a Perth-grown, Melbourne-transplanted writer and critic who suffers from an incurable addiction to theatre, comedy and screen culture.