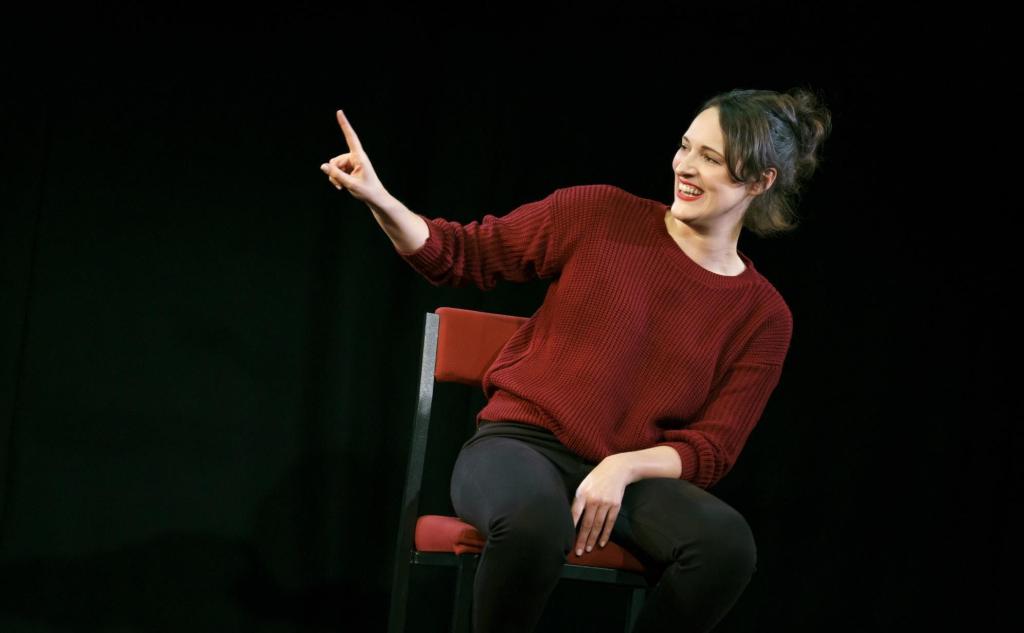 Phoebe Waller-Bridge won Emmys in 2019 for both her writing and acting in the TV adaptation of Fleabag. Photo: Joan Marcus.

If you haven’t heard of Fleabag by now, you’ve been deliberately avoiding the world. Phoebe Waller-Bridge’s uproarious one-woman show, first seen at Edinburgh Fringe in 2013, was turned into a phenomenally successful TV series of the same name by BBC and then distributed internationally through Amazon Prime. The show was nominated for 11 Emmy awards this year, winning four. National Theatre Live filmed the stage version at the Wyndham Theatre in London.

Fleabag’s character (who is never named) is a scabrous, hypersexualised version of her character Lulu in the Channel Four series Crashing (also conceived and written by Waller-Bridge), albeit much more provocative, damaged, and even more blackly hilarious. The stage version of the story differs in a few small details from the TV series but it’s pointless to compare them. The show opens and closes with an awkward loan interview (here a voiceover is included, as with a few other scenes), which goes wonderfully and inappropriately wrong, letting us into her character’s vulnerability and her disregard for the rules.

Waller-Bridge is a big performer with a comic timing all of her own. She’s unafraid of extensiveness, of making her audience wait, and her facial expressions are divinely telling. It is a heightened performance with smaller and larger moments projected so that nothing is unmissable. Memorably drawn-out moments of excruciating hilarity include a conversation with her sister at a feminist talk and her impersonations of her hapless ‘rodent’ boyfriend. She excels in tension-filled silences which are as revealing as her utterances, and she waits for you to get a joke before continuing. You see where she employs the golden rule of ‘less is more’, although it doesn’t feel like it as the show is chock-a-block full of emotion and personality. Much of the fun of the TV series is her speaking directly to the camera and of course with her live show you get this most of the time.

On the surface, Fleabag’s story is about her wonky love life and difficult family relationships but really, it’s about her being a lonely human who’s something of an arsehole on occasion. And about her despair and grief over the loss of her mother and of her best friend and café co-owner, Boo, whose death came about inadvertently via the results of poor decisions in Fleabag’s own recent past.

The show runs for 65 minutes. It doesn’t feel like a one-woman performance at all. Fleabag leaves you wanting more. Luckily, there is with the TV series. Fleabag is entrancing, uncomfortable, familiar and honest. Waller-Bridge is every bit as charismatic on stage as she is on screen. She can’t do any wrong, it seems.