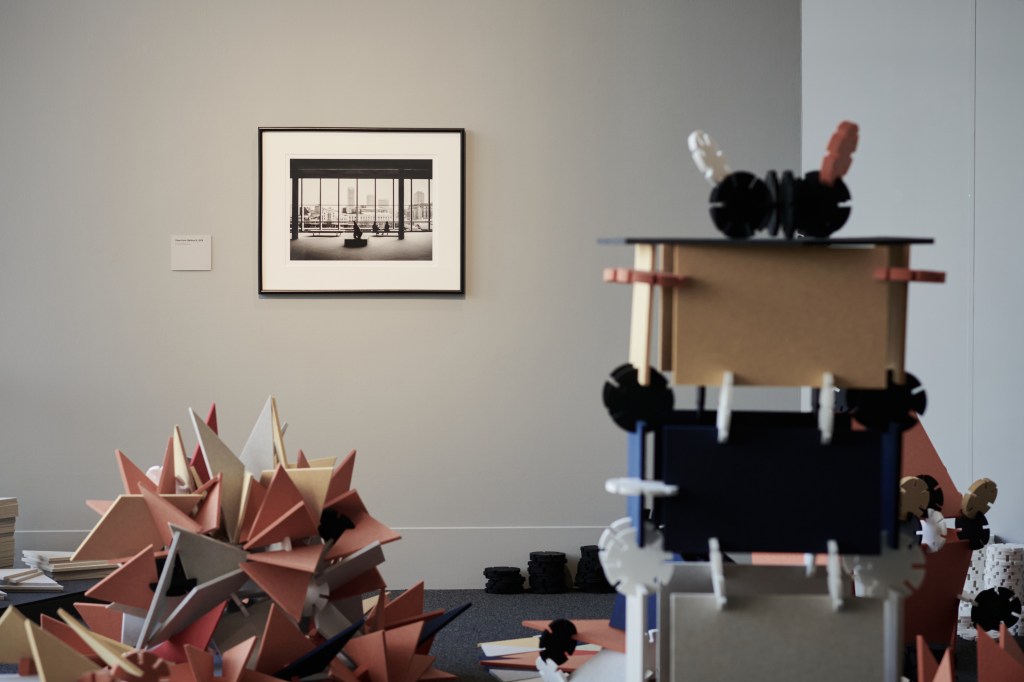 The Art Gallery of WA’s recent exhibition The View From Here was a blockbuster survey of Western Australian art as it stands today. Following a similar thread is Looking Out/Back/In, an exploration of, and interaction with, the WA viewing audience. Located in what is referred to as Gallery 9, Looking Out/Back/In features an exhibition by local artist, Eveline Kotai alongside a multi-sensory play space that commingles human bodies with architectural spaces through the lens of time.

Designed in collaboration with the gallery’s Head of Learning and Creativity Research, Lilly Blue, Looking Out/Back/In invites both children and adults alike, to participate in an open-ended artwork where traditional power structures between artist, artwork and viewer magically dissolve and the scholarship of creativity and play-based learning is nurtured and elevated.

Developed over 18 months and now in its third iteration, Looking Out/Back/In was initially conceived in response to an anonymous black and white photograph taken out of the very same gallery window in 1979. At some point the windows were covered up to protect the artworks from the light and remained that way up until recently. Today’s visitors are encouraged to look out at the city’s skyline once again, then back to imagine the city at a different time in history before heading in to explore the building’s distinctive design features and spatial geometries on which Kotai’s interactive work is based.

Kotai is best known for her stitched collages that describe transitory worlds using complex layers of colour, pattern, and texture. Akin to a form of necromancy, she breathes new life and possibilities into dead and discarded paintings, cutting them up into small fragments before meticulously reassembling them with invisible thread. The artwork she has created for Looking Out/Back/In adopts a similar methodology and features a large-scale, mixed media interpretation of the original photograph. At first glance Skyline/Timeline looks like a digital reproduction but closer inspection reveals a mosaic of 65 individual drawings captured at different stages in time, each one rich with its own subtle deviations and imperfections. It functions as a conceptual anchor, marrying time and space with the human hand.

In the centre of the gallery is the dedicated play-space; the open studio that keeps the artwork alive and moving forward. Scattered all around the room are colourful 2D shapes cut from a felt-like acoustic material, each one an echo of the building’s architecture. Visitors are invited to assemble these shapes into their own sculptures or cubby-like structures. Beyond the bright colours and tactile surfaces is a collage of sound by Schmo (AKA Harry Hohnen) that introduces an additional layer of complexity.

Demonstrating a purposeful shift away from the ubiquitous influence of the traditional, white cube gallery model that visitors have come to expect, Blue’s approach is best described as bold, innovative and holistic when it comes to reframing community engagement and participation in a large public institution like AGWA.

Moreover, there is a desire to facilitate understanding around the creation of an artwork as being more than just a ‘thing’ to be displayed. In Looking Out/Back/In the emphasis is on interaction; transition; transformation; reflection; a collective metamorphosis and ongoing dialogue that values the process of creating over the outcome.

In this space, the viewer becomes an extension of the artist, invited to dalliance with curiosity and continue the creative vision beyond the frame. As such, the education program fits in seamlessly with the creative work, striking a balance between serious artmaking and play-based learning regardless of age.

Looking Out/Back/In was on display at the Art Gallery of Western Australian until 7 February 2022.