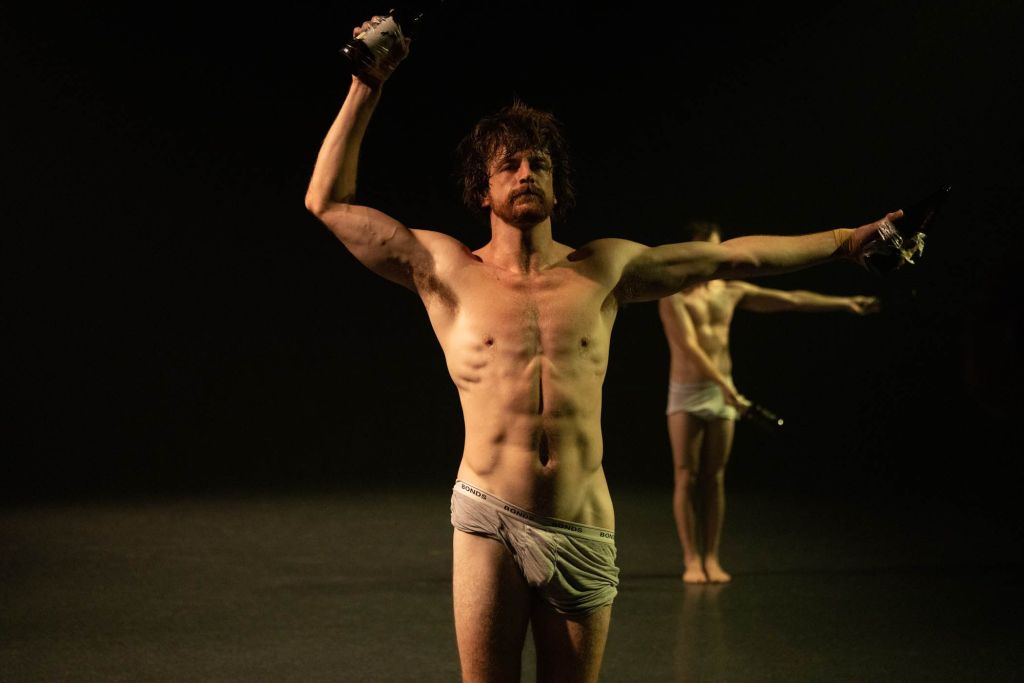 Felix Sampson, one of the Dancenorth performers. Picture by Amber Haines.

It is always interesting to see what dancers are experimenting with when they are given the opportunity to flex choreographic muscles in an environment which has neither the pressure of box-office targets nor other narrow confines. Curated by the company’s Associate Artistic Director, Amber Haines, Dancenorth gave its dancers the opportunity to do just that for Tomorrow Makers 4, which opened at Townsville’s Dancenorth Theatre for a short run on 7 October 2021.

All four works were given the customary full production values from Dancenorth’s creative team, which was a perfect environment for the novice choreographers. More importantly it gave them the opportunity to take the audience on different journeys and spin narratives that we probably would not ordinarily see.

What emerged – whether by default or design – was a strong theme of experimenting with voice and the spoken word in three of the four offerings.

In recent years, Dancenorth’s company trademark has always a certain startling and robust athleticism, which was strangely not evident in what was essentially a rather languid quartet of works short on movement but generally long on the use of voice. But therein lies a trap – just because one has a microphone does not mean the audience can hear clearly if your diction isn’t up to scratch, and for me there was a little too much Brandoesque mumbling.

This year’s program showcased the work of four dancers – Felix Sampson (the company’s oldest serving dancer), Nelson Earl, Niharika Semapati and Michael Smith. The four works featured solos or combinations of all four dancers, producing pieces that were different but shared a central Dadaistic flavour of absurdity and satire.

An arts movement that began shortly after WWI, Dadaism is characterised by performance that rejects logic, reason and the aestheticism of modern capitalist society and this was an overarching theme that seemed to pervade this Dancenorth season. This could be perceived as an inadvertent reaction to all the changeable chaos around us, but what was interesting was that the audience’s response to the evening was as Dadaistic as the performance. Wavering between love and hate, audience reactions ranged from finding the illogical hysteria in it to having no response at all.

With Felix Sampson on some outstanding vocals performing variations on Donna Summer’s 1977 song ‘I Feel Love’, Michael Smith’s It’s Called Achilles was a bizarre look at the notion of ‘camp’. It began with Smith rushing around the theatre, weaving in and out of the audience, panting noisily. The work culminated oddly with Smith leaping out of a window at the very rear of the theatre’s old stage, which is rarely used.

Niharika Senapati’s work Angel was a strange and somewhat ethereal work which saw her using a great deal of vocal work and limited movement. Using technology to layer her live voice work in performance, the piece featured interesting lighting design and some startling images.  Senapati recited her own poetry, a message which would perhaps have been more effective with a combination of better audibility and vocal clarity.

Good Boys from Nelson Earl was a look at the world of blokes and drinking. Performed by Felix Sampson and Michael Smith, this was an unusual contribution which certainly had potential for further exploration to look at both the amusing and tragic sides of this combination – men and booze – in our society.

The final offering of the evening was Felix Sampson’s Things You Can Do with a Microphone, probably the most Dadaistic offering of the night – and, as its title suggested, it was just that. Three dancers (Senapati, Earl and Smith) used a microphone to create avant-garde, off-the-wall noises, words and phrases, creating curious scenarios using mostly voice and very little dance or movement.

It was interesting to see a great use of improvisation within the four works. While there is no doubt as to the value of this technique as a creative tool, given the unpredictable nature and outcomes of improvisation, the jury is still out on whether this is as effective in performance.

In essence this was perhaps the most bizarre contribution in this series of works by this year’s team of Dancenorth dancers, but it was nonetheless interesting to see the experimental outcomes.