Luke Skywalker and Darth Vader do battle with the ASO!
Dr Diana Carroll 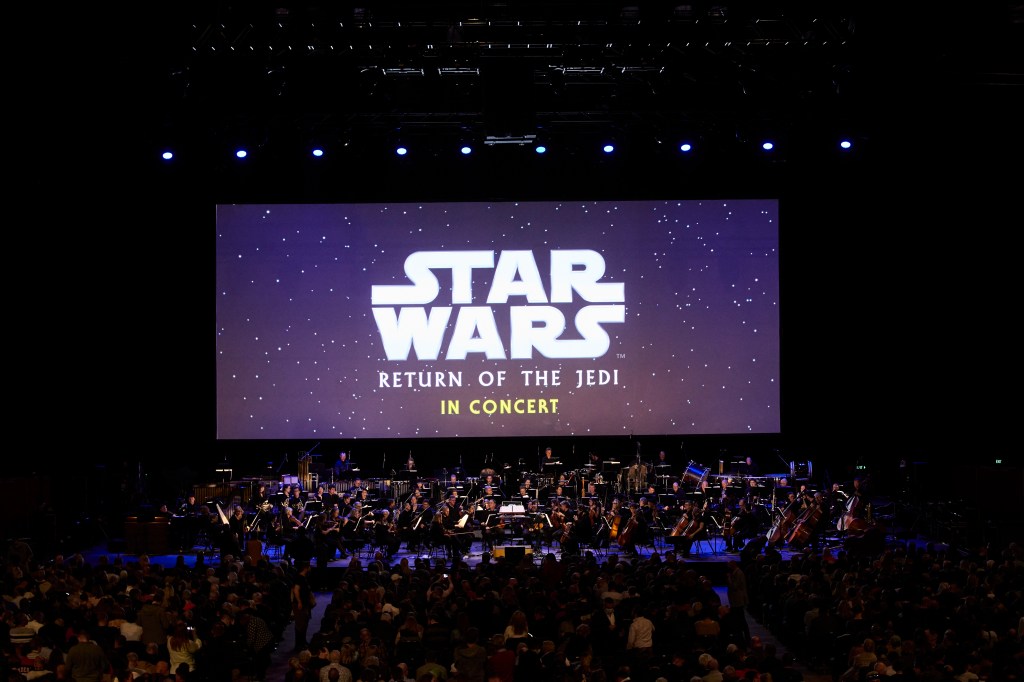 ‘The addition of a live orchestra both enhances and changes the filmic experience. It does focus your attention on the magnificent score by that amazing master of movie music, John Williams.’ Photo by Claudio Raschella.

It’s not often a conductor begins a performance in the company of Darth Vader, Luke Skywalker, Princess Leia, a few droids, and some Jedi Knights. But this was the opening of the Star Wars: Return of the Jedi movie concert and many in the audience had also dressed for the occasion.

Return of the Jedi is considered by many aficionados to be the last of the ‘real’ Star Wars titles. It was the third movie in the original George Lucas trilogy. Confusingly for Star Wars novices, this is actually episode six in the storyline, thanks to the later release of a prequel trilogy.

After a warm welcome from conductor Nicholas Buc, it was down to business. The huge screen suspended above the stage lit up with the familiar Star Wars ‘opening crawl’ and the Adelaide Symphony Orchestra played the opening bars of the memorable Star Wars theme.

Watching this again on the big screen, and with full orchestral accompaniment, it’s easy to see why the Star Wars movie franchise was so successful. Return of the Jedi was the highest grossing film of the year (US) when it was released in 1983. And now it seems even more loveable with the inevitable warm glow of nostalgia. All those parents in the audience with their children would have been just kids themselves when they first saw the movie!

The Adelaide Entertainment Centre was filled with Star Wars fans intent on having a good time.  They laughed, clapped and cheered in all the right places, showing their appreciation for this great space opera and their affection for the main characters and the cute and cuddly Ewoks.

The addition of a live orchestra both enhances and changes the filmic experience. It does focus your attention on the magnificent score by that amazing master of movie music, John Williams. The score is big and brash with crashing percussion and strong brass and woodwinds. Williams’ concentrated use of distinctive leitmotifs make each character, or narrative thread, instantly recognisable musically as well as visually.

Listening again to John Williams’ marvellous score, it really is no surprise that he has been nominated for 52 Academy Awards. As Nicholas Buc explained, this puts Williams in second place behind Walt Disney himself on 59. Williams has also received 25 Grammy Awards and multiple BAFTAs, Academy Awards, and Golden Globes.

In concert, the orchestra adds to the emotional impact of the film, whether it is the sentimental quality of the strings or the pace and thunder of the brass, woodwinds, and percussion. The film itself is so engaging that it is sometimes easy to forget that the orchestra is right there on stage, but that’s not to undermine the sterling performance by Nicholas Buc and the players of the ASO.

There is a particular skill beyond the usual demands of conducting in keeping the musicians in perfect sync with the film. This is a technique mastered by Nicholas Buc who is very experienced as both a film conductor and composer. There is hardly a popular film score he hasn’t conducted in one of these movie-music events.

The concert would have been enhanced with more powerful amplification of both the orchestra and the film to give a more intense and immersive experience. And the sound quality on the film itself was poor, a little muffled, as if the film had been remastered but not the audio track.

It also seems a great shame that placement of the orchestra on the stage meant that only the front of the string section was visible to the majority of seats in the stalls. There was plenty of airspace to hang the screen a little higher, which would have allowed the players to be raised on tiered staging. Clearly the audience might appreciate the orchestra more if they could actually see the musicians, their fine instruments, and the intensity of their playing. The young ones in the audience, like my guest 10-year-old Blake, would have been especially engaged to actually see the harp, the percussion, and the great variety of instruments at work.

This was a marvellous evening of pure entertainment and the ASO was rewarded with a well-deserved standing ovation as the credits came to an end.

Performed for one night only: Saturday 21 August 2021, at Adelaide Entertainment Centre.