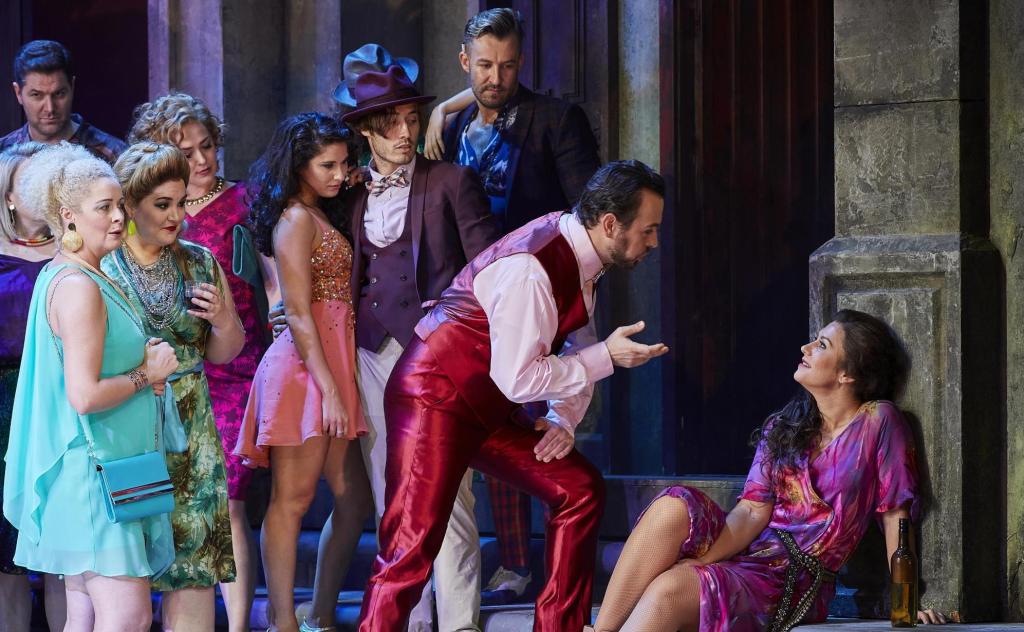 Lukasz Golinski as Escamillo and Veronica Simeoni as Carmen in Opera Australia’s production of Carmen at the Sydney Opera House. Photo: Keith Saunders.

This colourful and racy production of Carmen by Opera Australia is a revival of a production originally directed by John Bell in 2016. Carmen herself, the fiery and sultry femme fatale, explodes like a bombshell in the town of Havana. The unassuming soldier Jose captures her attention because, unlike the other brutes, he appears uninterested: Carmen only loves those do not love her in return. Fast forward a little and love-struck Jose has deserted at Carmen’s behest, which is all to the chagrin of Micaela, Jose’s childhood sweetheart from yonder village. Enter Escamillo, the celebrity matador, who falls under Carmen’s spell. Now we have a recipe for a passionate love triangle that escalates to the point of violent and tragic death.

Since its initial flop in in Paris in 1875, the Opéra-Comique (it features both singing and speaking) has become one of the most performed and widely loved examples of the form. Two of its arias, the Habanera and Toreador Song, have particularly broken through into the public consciousness. Unfortunately, the composer Georges Bizet (libretto by Henri Meilhac and Ludovic Halévy) did not live to see the work’s success, as he arguably died (why not?) of a broken heart at 36 after Carmen was panned by critics. It was lambasted for being immoral, as the heroine and supporting characters engage in behaviours that were felt to be beneath the dignity of the form. Apparently the producers struggled to give tickets away!

The costuming (Teresa Negroponte) and set (Michael Scott-Mitchell) represent a feast for the eye, and conspire to whisk us away to a ‘place like Havana’. Bell points out in the program that he was not interested in true fidelity to the location, as he was directing an opera, and not a travel documentary. The costumes are bright, variegated, and dynamic. Each piece is detailed and unique, which all comes to magnificent head with the revelation of the matadors themselves, who glisten and sparkle during their whirling dance of death.

The set, featuring imposing columns and arches, has a gothic or sublime flavour as it looms over the action, providing shadowy alcoves in contrast to the vibrant costumes, which gesture to the dangerous underworld ready to swallow those who stray from the straight and narrow. Excellent lighting design (Trent Suidgeest) heightens these effects, and also demonstrates nuanced artistry, with street lights sparkling overhead, and blinking globes drawing our attention to ever hopeful street vendors.

Conductor Christian Badea leads the musicians with verve, and was warmly greeted by the audience each time he took up his appointed place. Veronica Simeoni performs Carmen with astonishing ease: it’s a role that has been turned down by many luminaries for being too demanding. Simeoni dances, acts and sings the part excellently. Lukasz Golinski is charming and winningly vainglorious as matador Escamillo. Roberto Aronica gives us a brutal and yet astonishingly sympathetic Jose.

This revival was well-reviewed after its first outing, and continues to represent a Carmen that is innovative and dynamic while remaining true to the original. It’s a night of passion and spectacle that is likely to please opera fans and (with its many recognisable arias) the uninitiated alike.