A delightful look into folk creativity in Australia.
Celina Lei 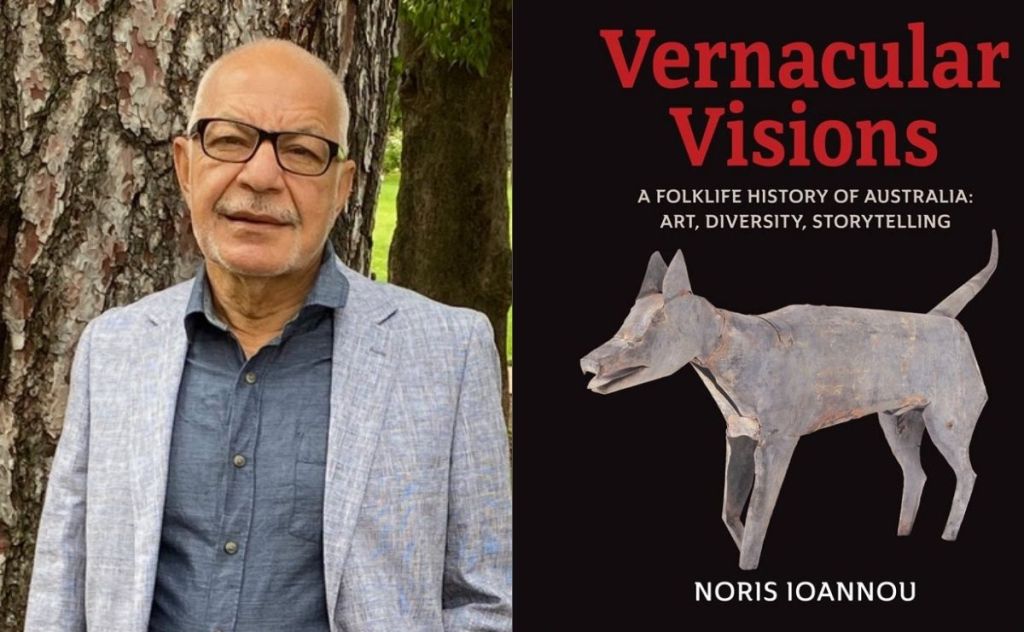 Noris Ioannou’s book reveals ‘fascinating examples of how tradition evolved with the individual’s new surroundings, building for themselves a sense of belonging when they are oceans away from home.’ Photo supplied.

From the very start of Vernacular Visions, cultural historian Noris Ioannou disputes outdated notions of folk art as a devalued and commercialised artform, and calls for renewed recognition of its influence spanning from First People’s practices to contemporary expressions.

I must admit the subheadings ‘art’, ‘diversity’, and ‘storytelling’ were what drew me in, and delving into its contents I was welcomed by the rich history of practices that draw a stronger connection between community makers, innovative creativity and the so-called fine arts than many exhibitions on the topic.

It served, as Ioannou had hoped, as ‘an alternative history and view of the Australian peoples’ in all its diversity, sentiment, and in particular, commonalities which convey ‘an expression of shared lives’.

These are introduced through a fascinating array of objects that may or may not register as beautiful artefacts of folk creativity. Such examples include a c.1915 heart-shaped pin cushion made at sea by a Sydney sailor as a keepsake with threaded beads that spell ‘Think of me’, now in the Australian National Maritime Museum; and the Australian AIDS Memorial Quilt that speaks to the power of communal involvement in advocacy and expression.

From early immigration to Australia’s multicultural landscape today, the book reveals fascinating examples of how tradition evolved with each individual’s new surroundings, building for themselves a sense of belonging when they are oceans away from home.

Secrets were revealed of the profound German potter Johann Samuel Hoffman who settled in the Barossa Valley in the mid-19th century (later comes an entire chapter on Australian-Germanic folk arts), and the prolific Italian-born artist Erminio Ailian’s naïve works witnessing a migrant’s journey of longing and adaptation.

Through re-examining folk art, Ioannou offers insights to our contemporary habits as well: labouring in the garden might be a communal declaration of individuality. A common thread of expression can be seen with graffiti and street art or recycling as a practice of sustainability that’s an extension of the revival of the folk tradition of repurposing and making do.

A more powerful idea generated from Ioannou’s research would be that folk art is an expression that bridged the gap between cultural diversity and collective identity, or nationhood. This is especially pertinent to the migrational background of Australia, where ‘folk art and culture can provide one tangible expression of an Australian collective sense of cultural diversity’.

Popularised notions such as ‘grassroot creativity’, ‘sustainability’ and ‘cross-disciplinary’ in the contemporary art world context can be formulated within the powerful framework of folk art, and defined as forms of ‘vernacular art’ which resists industrialised perfection (think American Minimalism in the 60s) and institutionalised expressions.

As we see increasing value placed upon regional cultural developments and look at the potential of these marginalised practices with refreshed eyes, perhaps it is also time to reinvestigate the significance of folk art traditions which hold place-making and community practice at their core.

The book is for anyone looking to delve into the pockets of creativity that have united communities, propelled cultural practices, and offered a deeper understanding of the social habits that make up our identity. It can be said that new vernacular forms and folk creativity continue to drive this understanding today.