At the heart of Hughes' work there is a calm, a still point, drawing the viewer into a quiet space on which to mediate.
Mem Capp 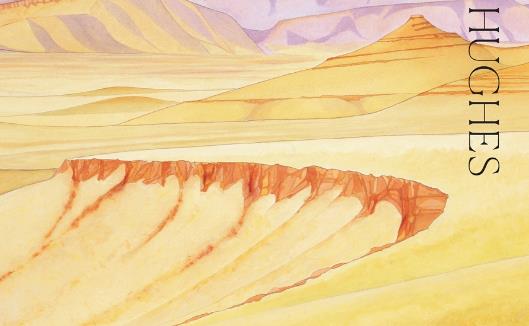 When the 19th century English poet Gerard Manley Hopkins spoke of an ‘inscape’, he was touching on an experience that went beyond his love of the natural world to something greater; he conveyed this through the beauty and lyricism of his poetry. Like Hopkins, the contemporary English artist Philip Hughes captures something of this sense of the sublime through his paintings of paired back, minimal landscapes: At the heart of Hughes’ work there is a calm, a still point, drawing the viewer into a quiet space on which to mediate.

Influenced predominately by 1950s abstract expressionism, Hughes was an engineer and later co-founder of the UK computer giant Logica before travelling the world to strange and challenging environments to pursue his passion for landscape painting.

Informed by his love of maps and through the use of aerial photography and electronic survey techniques, as well as careful studies on site, Hughes captures the forms before him through an analytical eye. Using clean-lines and blocks of colour, Hughes takes the viewer on a journey from landscapes of human intervention to imposing natural landforms, rolling plains and calm bays.

Painting the Ancient Land of Australia, is the latest Thames and Hudson publication of Hughes travels across the Australian continent over the last three decades.

This beautifully presented large format-style, coffee table book with Foreword by Glenn Murcutt and introduction by Jonathan Meyer, consists of support material such as topographical and geological maps and personal accounts of his experiences and impressions, along with annotated sketches and larger scale paintings.

Terraces of Tom Price Mine, 2005, acrylic and aquacryl on paper captures the gouged red landscape of the mine site; a monument to man’s reshaping of the land. Using washes of soft pink against sun scorched reds of the Pilbara, Hughes calms the atmosphere with a backdrop of light green.

Through such paintings, the artist encourages us to reflect on the ecological and cultural impacts of mining in the name of profit: The destruction of heritage sites such as Juukan Gorge cave earlier this year a recent example

The manner in which Hughes interrogates his subject matter suggests something of his scientific background; by exploring his subject from a range of perspectives he is able to draw the viewer into new ways of seeing the environment.

A terrific addition to the home or school library.

Cabbage Tree Creek, 1 June 1995, is a notebook documentation of a segment of rock escarpment at the base of a waterfall; accompanying notes giving a sense of the experience, time of day and impacted of light and shade on the way the artist interprets the landscape.

Piccaninny Creek, 1996, pencil and acrylic on paper takes us from the detailed study of a rock face to a landscape view of a group of amazing rock formations: The beauty in the beehive dome shapes of rocks as they huddle together are captured through gently expressive line with a wash of green at their base.

Bungle Bungle, 5 June, 1996, a pastel sketch on card with accompanying text further explores these rock formations in soft oranges and ochres, adding detail and colour while an aerial perspective of Piccaninny Creek leads to a wonderfully abstracted version of the creek bed as seen from above.

Exhibited widely in the UK and internationally with work held in numerous public and private collections, Philip Hughes exploration of this ancient land is beautifully presented in this impressive publication. Also included, at the back of the book, are exhibition lists, publications, collections and lists of works.

A terrific addition to the home or school library.