MALTHOUSE: The medieval myth of a creature fashioned from clay and animated by supernatural means finds vital life in this new play by Lally Katz.
Richard Watts 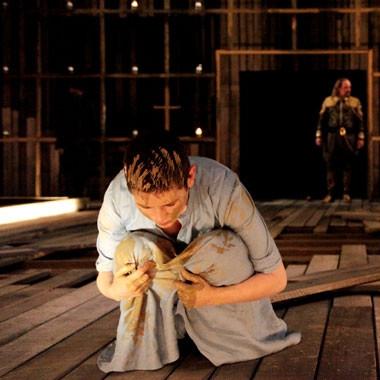 Long before Frankenstein’s Monster aroused both pity and terror in a generation of film-goers, there was the Golem. Lurching out of the myths and mist of antiquity, this soulless creature of clay, animated by the name of God and designed to protect the Jews of Prague from persecution, has fascinated storytellers since at least the Middle Ages.

While references to Golem-like creatures appear as far back as the oldest books of the Bible (Adam, after all, is made of “the dust of the ground”) perhaps the most famous version of the Golem story is the landmark 1920 film by actor/director Paul Wegener, Der Golem, wie er in die Welt kam (The Golem: How He Came into the World), ranked alongside The Cabinet of Dr Caligari (1919) and Nosferatu (1922) as one of the true masterpieces of German Expressionist cinema.

Expressionistic motifs are subtly referenced throughout the Malthouse Theatre’s latest production, A Golem Story. Anna Cordingley’s stark wooden set, the stage jutting out into the audience, effortlessly evokes Prague in 1580 while simultaneously recalling the haunted streets of The Cabinet of Dr Caligari. Paul Jackson’s exquisite lighting design is equally Expressionistic, but it is the sparse script by Lally Katz (Goodbye Vaudeville Charlie Mudd, The Black Swan of Trespass) which perhaps most successfully evokes the spirit of Expressionism though its focus on mood and emotion over fine detail, on archetypes over individuals.

As the play opens, a young woman, Ahava (a compelling performance by Yael Stone) awakens beneath a candle-lit chandelier, questioning all around her. A recent exorcism to remove the dybbuk (a malicious spirit) that has possessed her – the spirit of her late fiancée, Israel Hasidim, a suicide – has rendered Ahava without memory, and more importantly, without knowledge of God.

Ahava’s exorcist is the Rabbi (Brian Lipson), but while he welcomes her into the synagogue, his student, (Dan Spielman) is uncomfortable with Ahava’s presence, a fact the young man makes no attempt to hide.

While tensions exist inside the synagogue, greater dangers lurk outside. A child has been murdered, and the Guard (Greg Stone) blames the Jews. His bigotry and hatred know no bounds, and in fear of a pogrom, the Rabbi – assisted by Ahava – creates a Golem to protect the ghetto and its inhabitants.

Angered at such resistance, the Guard will go to shocking lengths to incite violence against the Jews, despite the wishes of his Emperor (Mark Jones, displaying superb comic timing), a far more reasonable man, and one with an appreciation of both aesthetic beauty and the arcane arts.

Unsurprisingly, the results are tragic, not least for Ahava, but from an audience member’s perspective they are also engrossing, engaging, and deeply compelling.

Some may find the starkness of the text underwhelming – this is perhaps Katz’s most minimal and refined work to date; a tone which the sometimes excessive Kantor matches, directing with considerable restraint. Others may miss the presence of a physical Golem, which is represented by a shimmering light, as if the animating spirit of the Lord had manifested on stage instead of an all too solid creature of clay – but then this is not an Andrew Lloyd Webber production, where stagecraft takes the place of story.

Where A Golem Story is grandiose is in its music – a haunting vocal score arranged and directed by Mark Jones (The Beautiful Losers) and performed by the whole cast – and in its deeper themes; its exploration of the ineffable and the spiritual.

WHAT THE OTHER CRITICS SAID

The Age: “Lally Katz’s A Golem Story is a rare, well-made engagement with the sacred — a vanishing aspect of contemporary life.

Time Out Melbourne: “For both director and writer, this feels like a somewhat effortful essay at “serious” theatre, an attempt to expel the capricious or whimsically weird elements that have characterised both of their respective careers.”

Australian Stage: “A Golem Story is a Malthouse theatre production not to be missed.”