Michael Gurr was an important Australian playwright, a speechwriter, and committed to social justice. He has died at the age of 55.
Richard Watts 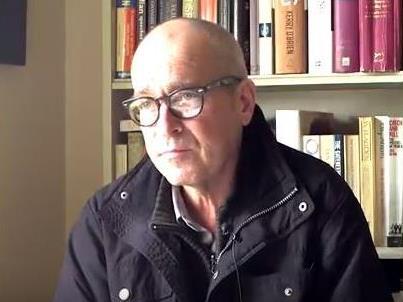 Michael Gurr, the Melbourne-born playwright whose works included Jerusalem, Sex Diary of an Infidel (winner of the Victorian and NSW Premier’s Literary Awards, as well as a Green Room Award for Best Play), Crazy Brave and Something to Declare, passed away in the early hours of Tuesday morning after a short illness.

He is remembered as a beautiful writer, fiercely intelligent, a loyal friend, and a passionate advocate for social justice.

Gurr was born in 1961 and grew up in Melbourne’s south-east suburbs. Educated at Melbourne High School, he gravitated to the National Theatre Drama School in St Kilda where he was mentored by the then-director, the late Joan Harris.

A number of the plays he wrote during that time were sent to Ray Lawler, Literary Advisor at Melbourne Theatre Company (MTC) which resulted in Gurr becoming Writer in Residence at the MTC in 1982, aged just 20.

‘When Michael came to Melbourne Theatre Company he was already beyond any need of me as a literary mentor or advisor,’ said Lawler. ‘What we found instead was an immediate understanding based on laughter, and this is something that sustained our friendship over many years. Laughter based on mutual appreciation of so many good and true things.’

His plays were also produced by the Malthouse (formerly Playbox Theatre), Griffin, and internationally.

Actor Janet Andrewatha, who worked on four of his plays in the 1990s, described Gurr as ‘her dearest friend. I loved him dearly and I’m devastated by his loss,’ she told ArtsHub.

‘He lived his art and his politics. He was a portrait of a deeply honest, empathetic man, and he was a genius at writing. And he was hilarious – he had the most wicked, divine, eccentric sense of humour. We laughed every day together, every day.’

Tom Healey, literary manager at AustralianPlays.org, described Gurr as one of Australia’s most politically-focused playwrights.

‘He had a beautiful ability to combine politics and the personal in such an extraordinary way and he was kind of fearless, politically; very critical and very passionate and very strong and a great believer in social justice, and that’s really the big gap that’s he’s going to leave,’ Healey said.

‘He was one of the brightest people I’ve ever met – so, so, so smart. Incredibly funny, very acerbic and witty. Some of his barbs were very painful,’ Healey laughed, ‘but he was very, very funny and sweet as well, in a way. You could detect a real love of life and an affection underneath what he was saying. He was very naughty – extremely naughty. One of those people that you’d often hear in foyers saying the wrong thing.’

Kate Cherry, CEO and Artistic Director of the National Institute of Dramatic Art, said: ‘Michael was a loved lion, fierce, compassionate, loyal. A crusader, a wordsmith, a friend, a warrior, a shooting star. We will miss our wonderful writer and dear friend but we will never forget your crusade  for Australian playwrights and your love of Australian stories.’

Virginia Lovett, MTC Executive Director said: ‘It is a very sad day for MTC. Michael came to the company at only 20 – to learn under the great Ray Lawler – and went on to become the youngest person to hold the post as MTC Writer in Residence. He went on to cram so much into far too short a life.

‘Michael has been an outstanding advocate for his craft and leaves an important legacy,’ she added.

Similarly, a statement from Malthouse Theatre said the company was ‘very sad to hear the news of Michael Gurr’s passing. Michael was a passionate and important voice in the Melbourne theatre community, and contributed immensely to Malthouse Theatre’s history of innovative and boundary-pushing works of theatre.’

Others mourned his loss online.

Vale Michael Gurr loved literary lion loyal to progressive politics He had our backs when we were in the arena. I remember & today I weep

So sad to hear that Michael Gurr has died.
He was such a dynamo. Such a True Believer.

Very sad to learn of the passing of playwright Michael Gurr. He was a passionate and persuasive voice. Gone too young.

In addition to writing for the theatre, Gurr also became a speech writer for Victorian Labor leader John Brumby in 1996, and went on to write speeches for Steve Bracks during his time as Opposition Leader, then as Premier.

Bracks said in a statement today: ‘Michael made an enormous contribution to State Labor Governments and was a mentor and speechwriter to several Labor Premiers. His values of fairness and equity shone through in all his work.’

John Brumby added: ‘Michael was a beautiful writer and a great advocate for the arts. He was a relentless political campaigner and made a great contribution to the Labor Opposition during challenging times in the 90’s. He had a wonderful sense of humour, a big heart and a great fighting spirit. He will be fondly remembered by all with whom he worked.’

Gurr’s 2003 spoken narration, Something to Declare, collected and told the stories of asylum seekers who journeyed to Australia, often to have their refugee claims rejected once they reached this country. It has been performed more than 100 times Australia-wide.

His last play, Mercy, premiered in 2010 and his radio adaptation of Patrick White’s last novel, Memoirs of Many in One, aired on ABC Radio in 2012. His memoir, Days Like These, was published by Melbourne University Press in 2006.

Former Prime Minister Julia Gillard, who worked with Gurr in the Victorian Labor Opposition in the late 1990s, said that his ‘funny and beautifully written’ autobiography connected ‘politics to life in a way you rarely see’.

At the time of his death Gurr was apparently working on the latest draft of a new play.

A public memorial for Michael Gurr will be held at Melbourne’s Malthouse Theatre on Monday 15 May; gather at 6:30pm for a 7pm start.