The Australian circus community is in mourning following the death of clown, rigger and friend Derek Ives on Thursday.
Richard Watts
[This is archived content and may not display in the originally intended format.] 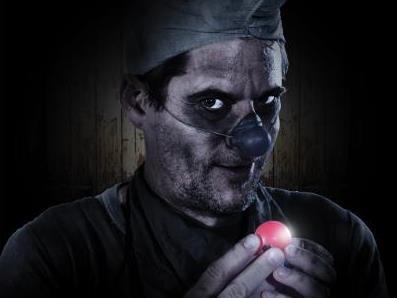 Derek Ives in the 2014 production The Long Pigs. Image by Ponch Hawkes.

Iconoclastic, inspiring, much loved and deeply influential, the Australian clown and circus artist Derek Ives died on Thursday. He was 47.

Remembered as gentle, open, vulnerable and subversive, Ives began creating contemporary circus and performance professionally in 1987, as a founder, performer, rigger and director of Rock’n’Roll Circus (now Circa). His clowning skills were superlative, and saw him work with many artists, companies and productions nationally and internationally.

Antonella Casella, Senior Artistic Associate at Circus Oz and a friend and colleague of Ives for many years, said: ‘When we started Rock’n’Roll Circus in 1987, Derek, at 18 was the youngest member, and already the veteran of the group. At 14 he was performing with “The Flying Toupe Brothers”.  At 17, he taught me to juggle when he was with Street Arts Community Theatre Company. At 19, he was co-founder, performer and rigger for Rock’n’Roll Circus.

‘Twenty years later, when we invited him to Circus Oz to direct a show, he brought his immense knowledge, experience and heart to the floor. We started Rock’n’Roll Circus to change the world, and, as we like to say in the circus, he did it every damn day,’ she said.

Director, teacher, devisor and performer Sue Broadway recalls Ives’ participation in the First Nanjing Project in Albury in 1983, when he was just a teenager.

‘He learnt clown and juggling skills alongside Tim Tyler and others. His talent and obsessive practicing were obvious even then and he grew into a circus artist of enormous stature – funny, bleak, moving and skilful. He was a polymath, leaping between forms like a goat and utilising his diverse and unpredictable capacities in startling ways. He will be much missed,’ said Broadway.

More recently he was Tumble Circus’ resident director in France at La Fountinaeau, Centre for the Development of Street Performance in Brest; Associate Director at Circus Oz in 2011 and 2012; and a devisor/performer in the critically acclaimed, dark clown show The Long Pigs in 2014.

He also worked with the likes of Circus Monoxide, the Flying Fruit Fly Circus, The Happy Sideshow and many other companies and individual artists, both onstage and behind the scenes, and at the National Institute of Circus Arts (NICA) implementing safety systems and circus directing.

Anni Davey, freelance director and Chair of the Australian Circus and Physical Theatre Association (ACAPTA) said ‘Derek Ives was a dreamer and an inspirer. He was the one who insisted on the rig being part of the show, clean, minimal, functional, beautiful! He pushed all of us into realising ideas we didn’t know we had. He was wild and perverse and crazy and gorgeous and sexy and we all loved him! We trusted him with our lives as a rigger, but we also trusted him with his ideas – crazy, bent, out there, off the wall, genius ideas!’

Tributes to Ives and his work have flowed in from across the nation.

Circa Artistic Director Yaron Lifschitz said, ‘Derek was a blazing dark light at the heart of new circus in Australia. Brilliant, absurdly talented and complex; his generous heart and startling mind opened worlds and moved us all. Almost every time someone says “there was this act I saw years ago that I loved,” I know they’ll be talking about Derek’s work. Many of us including all of us at Circa wouldn’t be here today without his initiative and energy. He will be missed.’

Clown, actor, writer and director Clare Bartholomew, who worked alongside Ives for many years, remembered him as a ‘gentle, kind, extremely loving man and a very, very talented performer, theatre maker, clown, director, rigger and teacher’.

She said: ‘The theatre he made was inventive, rich, darkly funny and physical with desperate pathos and beauty … Eventually we got to teach our own clown intensives together and made a show together with Nicci Wilks and Susie Dee. The first night we performed The Long Pigs, we three all ran offstage, grabbed each other and shared that we’d always wanted to make a show as dark as this and couldn’t have imagined making it with anyone else. So happy we got to make something exciting, funny, strange and wonderful together. So utterly devastated it’s over and I’ll never see his cheeky face again. Carrier of bits of rope, recycler extraordinaire, magician of bottles of wine, bucket lover, mender of bikes, brilliant cook. Love him so much.’

Professional unusualist Captain Ruin spoke of Ives’ unique place in the circus world. ‘His iconoclastic performance was striking in its refusal to embrace perfection. Derek had mastered the art of rough edges, steel buckets and quizzical expressions as imaginative inventions exploded in his face. His life and work was a brightly burning inspiration and lesson that you did not have to follow the status quo, and that beauty could be found in all things … And personally, he followed this creative duality – an imperfect and lovely being who made everyone feel welcome and warm even when he was suffering his own personal trauma.’

Ruin added: ‘Derek Ives was a remarkable man who opened the door for a generation of artists inspired by his irreverence, intelligence and unorthodox refusal to fit into the status quo. He showed us all that to make great work does not necessarily make you a great human, and that I think is the most important part of the lesson he had to teach – that we must all find a balance between our dreams and reality if we would seek to live a comfortable life.’

Anna Pidgeon, former Melba Spiegeltent Producer at Circus Oz, said: ‘He was a kind, calm man who saw the world deeply and with complexity. I had so many late night/early morning/end of a long work day conversations with him that made me think, consider and want to explore. He was the first director I worked with on tour with Circus Oz and he taught me a huge amount whilst putting all his trust and faith in me, allowing me to do the same with him. He saw things others didn’t, good and bad and knew how to interpret them. His artistic brain was ever surprising and challenging. And ah, his rigging, all those little bits of string!’

Musician, composer and performer Carl Polke said, ‘Derek’s absurdist dark clown shone brightly. Performed with conviction impossible to resist, his world would envelope the audience, the tent, the theatre, and for three or so minutes we were somewhere else. My favourite times on stage with him; the sea of GP all having a “WTF?” moment. I felt him as kindred spirit, i think we all did, for he embodied a commitment that is easy to dream, difficult to realise … He was one of the kind of which we have too few.’

Jeremy Gaden, who worked with Ives on a number of projects, including producing The Candy Butchers, said, ‘Derek openly struggled with the human condition, in himself and in others. His struggle was expressed as strongly in his disinterest in his own personal wellbeing as it was in his amazing ability to capture the beauty and fragility of ordinary moments. He more than anyone in Australia’s contemporary circus scene was able to take humility and poignancy and stretch it to an almost uncomfortable level, before bringing the audience back to joy with the most ingenious of mechanical tricks or just a sprinkling of falling tin foil.

‘He created so many simply beautiful images, and crafted them with such nuance and generosity that it was at times hard to reconcile them with what was at times his awkward battle to reconcile himself within his own skin. From those of us who knew him from the outside to those who loved him from deep within, he was one of a kind and one that gave so much to others that he had none left for himself,’ Gaden told ArtsHub.

A friend and artist

Founder and frontman of The League of Sideshow Superstars, Shep Huntley, spoke of the deep love Ives had for all his friends, saying ‘How could someone so bony and skinny give such big warm hugs?’

He also shared a memory of Ives from the early 1990s.

‘I was sitting with Kareena Oats at one of the first Tasmanian Circus Festivals; we were watching the Circus Olympics. In particular we were watching an event called “Three ball tricks in a minute”. All the big names of the era were there, Salom, Greder, Richie Rich and the competition was close, people were scoring well – 35, 38, 40 tricks in a minute,’ said Huntley.

‘Just as the comp was about to finish a seedy, skinny figure in a black top, a tiny Chinese communist hat and glasses with long shorts and tattoos down his shins tried to slink from one tent to another tent in the distance. He was working, carrying something. He had no interest in the competition. Kareena started yelling “Derek, Derek come over here.” He arrived and reluctantly agreed to have a crack. Three different jugglers gave him three balls of different shapes weights and sizes.

‘He shrugged and started. Suddenly the balls were dancing and space in front of him came alive, the judges had trouble keeping up, he was pulling off combinations no-one had seen before. The crowd were in awe. After a minute his score was pretty much double the nearest competitor. He was immediately declared the winner and awarded the prize, which was a set of new professional juggling balls. He looked around, gave them to a kid, picked up his bundle and went back to work.

‘At that point in my life I think it was the coolest thing I had ever seen. One of the coolest people I know is gone and we are all sad, really sad. But we are all still here, and I’ll bet that kid is still juggling,’ Huntley finished.

Clown and comedian Chris ‘Christof’ Gregory said: ‘The whole world will put candles on their shoes. The rope, finally, will pour endlessly – upwards. A lone figure in a shabby top hat and laughable tailcoat will exit into the light and smoke and a spidery figure will scamper up the truss – and keep going, leaving the world without a counterweight. I knew you a long time ago. Bye Derek.’