Mora, whose life was as colourful as her paintings, helped foster Melbourne’s bohemian culture following her arrival from France in 1951.
Richard Watts 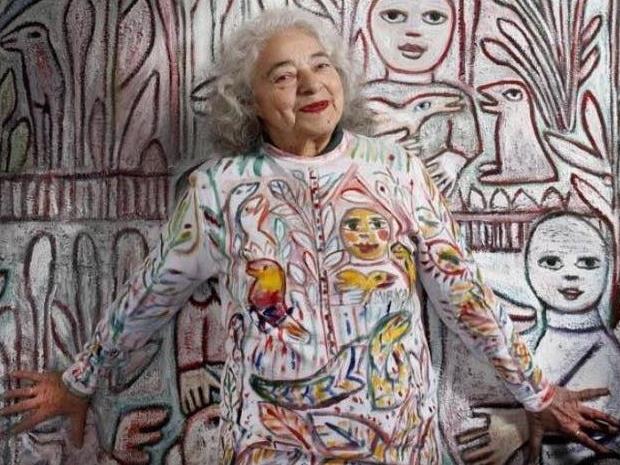 News of her death was announced by her son William via The Age on Monday night.

‘It’s with great sadness that the Mora family announces the passing of our matriarch, the magic Mirka Mora,’ Mora said.

‘An artist and mentor who touched the lives of thousands, she has had an indelible effect on Australia’s cultural life. At 90, she fought Alzheimer’s and age-related illness to the end.’

Born in Paris in 1928, Mirka Mora – who miraculously escaped from an Auschwitz-bound train at the age of 13 following the Nazi occupation of Paris – emigrated to Australia in 1951 with her husband Georges Mora, formerly a French resistance fighter whom she married in 1947.

A vivacious champion of modernism, she left her mark on Melbourne’s cafes and restaurants – literally, in the case of her mural at St Kilda’s Tolarno Hotel – as well as its galleries and theatres, even a tram, which she painted in 1978 as part of the first round of the Transporting Art project initiated by Victoria’s Hamer Government.

During the 1950s and 1960s the Moras established a series of popular European-style cafés and restaurants, starting with Mirka Café in Exhibition Street, which opened in 1954 and soon attracted a who’s who of then-contemporary artists including Charles Blackman, Fred Williams, Joy Hester, Sidney Nolan and Arthur Boyd.

It was followed by Café Balzac in East Melbourne in 1957 and Tolarno Bistro, St Kilda in 1965.

Simultaneously Mirka’s own art career flourished. Her early training was in mime and drama, but by the time she reached Australia her focus had become painting. Over time she branched out from painting to incorporate soft sculptures, murals, mosaics, memoirs, dolls, clothing and more.

She was also an enthusiastic teacher and mentor.

On her son William’s website, Mirka’s aesthetic was described as ‘colourful [and] sensuous,’ and emerging ‘from the breadth of her interests and reading, her love of classical mythology, her desire to reclaim and make sense of childhood and familial relations, and her recognition of the power of sexual desire.’

The authors of The New McCulloch’s Encyclopedia of Australian Art describe her work as possessing ‘a certain Chagall-like joie de vivre mingled with the decorative qualities found in folk and child art.’

As The Conversation notes, ‘Mora had no formal training in fine arts, having left school at the age of 13 during the Second World War, when her family was arrested and subsequently gone into hiding in the French countryside.

‘She compensated for this by extensive reading in art history, philosophy and literature, and studying arts treatises and artists’ writings. As she likes to say, “books are the best teachers”, and they are the main source of inspiration for her own imagery. Her intellectual curiosity is wide: she has sought inspiration from medieval bestiaries, the symbolism of colours in the African outdoors, Greek mythology and Christian iconography.’

Paying tribute to her art and her life, Premier Daniel Andrews said: ‘As one of our nation’s most loved artists, Mirka was a driving force in Victoria’s artistic scene and instrumental in the re-formation of the Contemporary Art Society … Brave, funny, irreverent and talented, Mirka was an icon of our city and state.

‘Today Mirka’s work is represented in Victoria’s best galleries, in our most well-known restaurants – and fittingly – in the heart of our city, her mural welcoming visitors to Flinders Street Station. On behalf of the Victorian Government, I offer my sincere condolences to Mirka’s beloved family and friends.’

Minister for Creative Industries Martin Foley MP added: ‘The world weeps tonight for the loss of one of our brightest stars –Mirka Mora was that impossible combination of creativity and vitality that touched all those she came in contact with for the better. RIP Mirka.’

Lesley Harding, Artistic Director of Heide Museum of Modern Art, told ArtsHub, ‘Mirka was a central figure in the story of Heide, and in Melbourne’s cultural life. A talented and versatile artist, she possessed rare insight and sensitivity – and charmed all who encountered her. Mirka was a shining light and we will miss her greatly.’

A lengthier statement on the Heide website added: ‘Although we have lost Mirka her art endures, and leaves us with a rich and compelling portrait of her innermost self.’

Actor Magda Szubanski tweeted, ‘She lived through hell but gave us images of heaven. Vale beautiful soul,’ with another actor, Lachy Hulme, writing: ‘The Grande Dame of Melbourne has passed. Vale the extraordinary Mirka Mora. She invited me into her home, cooked for me, educated me, and helped me to be proud of my choice of career.’

Kelly Gellatly, Director of the Ian Potter Museum of Art at The University of Melbourne told ArtsHub: ‘Mirka Mora was one of the most generous and life-affirming people I have ever known. Her joyful spirit knew no bounds and filled and fuelled both her art and life. Her infectious, child-like curiosity and endless sense of wonder fed a fierce intellect and veracious and passionate love of learning, and she believed that life is about the most important and very best things – love, family, friends, food and art – all in happy, chaotic combination.

‘I’ve always thought that part of the reason that Mirka is so loved by so many, particularly women, is that she has shown us, through her own life, how to love bravely, and how to live life fearlessly, in your own way.

‘The world is a lesser place without her,’ Gellatly said.

Mirka Mora is survived by family including her three sons – filmmaker Philippe, art dealer William, and actor Tiriel – and her grandchildren.