Small, quiet moment of poetry shine in this world of darkness, tragedy and many, many feathers.
Jo Pickup
[This is archived content and may not display in the originally intended format.] 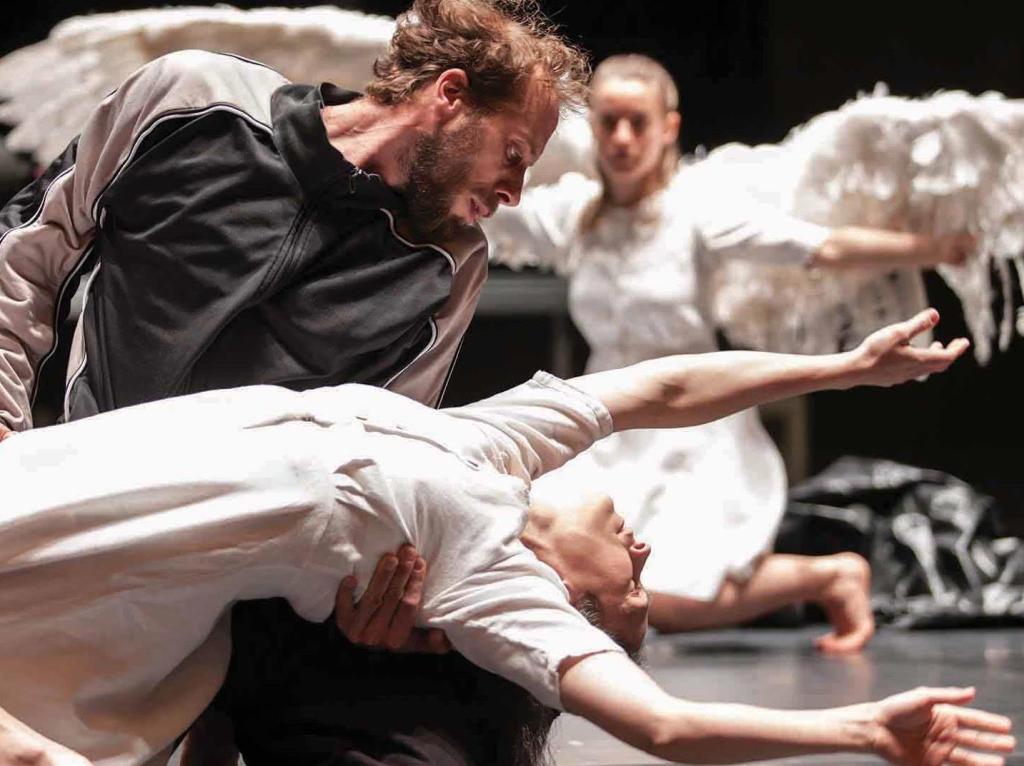 Jimmy O’Reilly is a 36 year old Irishman whose lot in life hasn’t given him much luck. Lonely and depressed, he stands at the edge of a lake with his dead father’s rifle in his hand. But as he places the gun’s barrels under his chin, preparing to end it all, an angelic winged creature descends from on high in a sweeping intervention that saves his fate. He is awe-struck by this magical creature – a vision? A figment of his addled mind? Jimmy isn’t sure.

We in the audience aren’t sure either, as we are drawn into Irish choreographer Michael Keegan- Dolan’s strange reimagining of the classic dance work, Swan Lake.

Keegan-Dolan is well known for his raw reinventions of traditional ballets. As the Director of his company Fabulous Beast Dance Theatre (1997 – 2005) he won accolades for powerful re-works of famous pieces like The Rite of Spring and Petrushka. With his new company Teaċ Daṁsa (House of Dance) launched in 2016, Keegan Dolan appears as committed as ever to mining the mysterious depths of the human soul and telling arcane stories inspired by the shivery climes of his homeland.

His Swan Lake is certainly bleak. We watch as Jimmy (played by Alex Leonhartsberger) hangs in the shadows of his depressed day-to-day reality. His appearance is suitably scruffy and forlorn, as his poor arthritic mother (played by Australian dance legend Elizabeth Cameron Dalman) carps at him to get out of the house to meet a nice Irish girl. Cameron Dalman and Leonhartsberger inhabit these sad, outcast characters well, with few words between them needed to cloud the theatre in despair.

A narrator – The Holy Man – is also there to guide us through the story. Expertly played by Mikel Murfi, The Holy Man’s presence is firm and authoritative. Musicians Mary Barnecutt (Cello), Aki (Nyckelharpa) and Danny Diamond (Fiddle) of Slow Moving Clouds also infuse the setting with mournful Irish tones. They sit upstage, overlooking the dim scene.

With such a weighty atmosphere, it’s therefore a relief to realise that when Leonhartsberger’s Jimmy starts to dance, he is impossible not to watch. Sure, his moves are full of sorrow and gloom, but as his body crumples and sways he is flawless in his control. His character may be a wavering wisp of a human, but his skill as a dancer is resolute.

Leonhartsberger is such an enigmatic dancer and when a small ensemble of swans (played by dancers Rachel Poirier, Kim Ceysens, Anna Kaszuba and Carys Staton) join him for various sequences throughout the work, his energy pulses through the group, propelling these scenes forward.

His presence does not however diminish the talents of the work’s four female dancers. When they move together they do so beautifully, and their circular spiralled movements twist and flow like the wind. Rachel Poirier who plays Finola/Odette gives everything to her character’s tortured spirit, and her radical modernised pas-de-deux with Jimmy/Prince Siegfried is exquisite.

Interestingly these small, quiet moments in the work are the most effective and impressionable. They offer poetic moments of respite in an otherwise strong, sometimes overblown and, dare I say it, beastly work.

But perhaps this is the point for Keegan-Dolan, whose work seems intent to push us to places where we must face our hidden beasts and the inner darknesses. He urges us not to be afraid of the dark. His Swan Lake is definitely not afraid. So go with courage and an open mind to experience his world of darkness, tragedy and many, many feathers.