Review: MTC’s The Lady in the Van, and Malthouse’s Barbara and the Camp Dogs

Melbourne’s two major theatre companies open significant productions a night apart, and never has the contrast between the companies been more pronounced.
Richard Watts
[This is archived content and may not display in the originally intended format.] 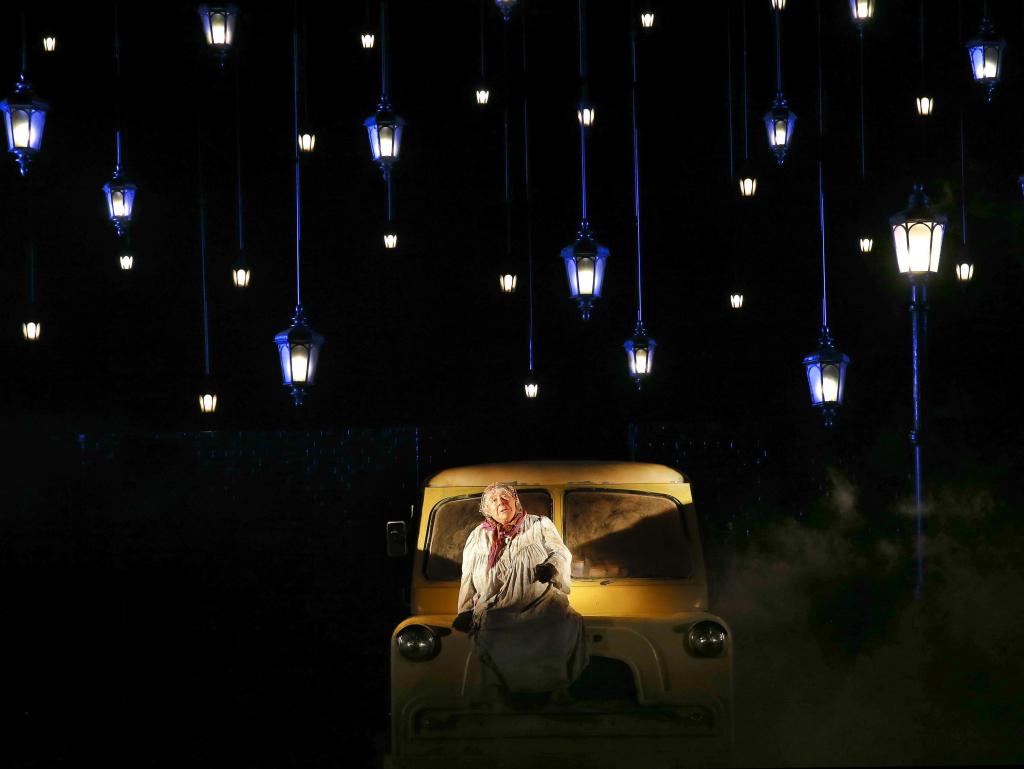 Miriam Margoyles in MTC’s The Lady in the Van. Photo credit: Jeff Busby.

The Lady in the Van is a showcase for revered actor Miriam Margoyles, who plays the titular character in the Melbourne Theatre Company (MTC) production of British playwright Alan Bennett’s memory play.

The play is effectively critic-proof – MTC had already announced an extension of the season before Thursday’s opening night thanks to Margoyles’ bankability.

In that regard, this production is akin to a Hollywood blockbuster – it doesn’t matter that it’s a staid and underwhelming production, that the most impressive moment in the long evening is a feat of stagecraft and not drama. Audiences have already paid good money to see The Lady in the Van, so in purely financial concerns its success is guaranteed.

But what of artistry? What of passion? Or does no-one dare contradict the oracle that is Tessitura and its auguristic filleting of the audience database to best predict a profitable production anymore?

Apart from that Mrs Lincoln, how did you enjoy the play?

Without question, Margoyles is a skilled actor and a larger-than-life personality for whom the role of Miss Mary Sheppard – a mentally ill religious fanatic who lived in a van in Bennett’s front yard from 1974 to 1989 – is well suited. It’s a perfect vehicle for her wit, charisma and irreverence.

But this production of Bennett’s play (which began as a series of diary entries before being turned into an essay in the London Review of Books in 1989, this play a decade later and a film in 2015) ultimately lacks heart. It’s workmanlike, but as a piece of theatre, it’s a deeply underwhelming start to the company’s 2019 mainstage season.

In contrast – and what a contrast it is – a few blocks away, Malthouse Theatre Company are staging the raw, relevant and heartfelt Barbara and the Camp Dogs in the Merlyn Theatre, which opened on Friday night following last week’s provocative Underground Railway Game in the Beckett Theatre.

Co-written by Alana Valentine and Ursula Yovich (who also performs in the production), Barbara and the Camp Dogs tells a story of anger, abandonment and inherited pain via the experiences of Aboriginal sisters Barbara (Yovich) and René (Elaine Crombie), whose on-again, off-again live-music career in Sydney is placed on hold when their mother is hospitalised in Darwin. 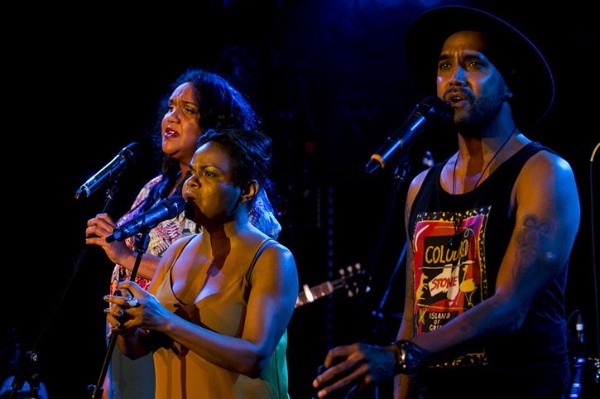 Initially played for laughs before sliding seamlessly into drama and tragedy, the play is an exhilarating hybrid of pub rock (complete with live three-piece band), road movie and traditional theatre. Despite having premiered in December 2017, the production feels more timely than ever, in part because of the recent tragedies which have highlighted the devastating effect of inter-generational trauma in Aboriginal communities.

Conversely, The Lady in the Van feels very much a period piece, while Bennett’s constant literary references peppered throughout the script – nods to Pinter, Beckett and others – feel self-conscious and pretentious.

More contrived still is the playwright’s decision to write himself into the script not once but twice. One Alan Bennett (Daniel Frederiksen) is living with the direct consequences of having Miss Sheppard squat in his yard; years later, his older self (James Millar) recalls their conversations and rewrites them for dramatic effect – sometimes even inventing scenes wholesale, a point of friction between the two.

Dressed identically (set and costume designed by Alicia Clements), the two playwrights speak to each other across time – there’s even a hint of self-flirtation, though this is never taken so far as to become pronounced. But while Frederiksen and Millar display at least some chemistry, there’s little sense of such connection between Frederiksen and Margoyles – the two may be sharing a stage but there’s no spark between them.

Without emotional grounding, Bennett’s decision to allow the odiferous and cantankerous old woman to keep her four-wheeled domicile parked in his front yard for so many years stretches credulity. It may be a historical fact, but the reasons for her extended residency are not conveyed emotionally in director Dean Bryant’s by-the-numbers production.

Instead, this MTC production relies on stagecraft – the predictable MTC revolve, the replacement of a miniature van with a life-size reproduction, which arrives on stage with almost a fanfare (once again recalling the effects-heavy, script-light Hollywood blockbuster), chairs and podiums floating across stage – to give it a sense of grandeur and sentiment.

The best such moment comes as Margoyles’ Miss Sheppard sits on the bonnet of her van reflecting on the past. As if illuminating her sorrows and her reflections, an array of streetlights float down in a moment that’s both beautiful and melancholic. But when you’re admiring stagecraft over emotional truth, you know there’s something untethered in the production.

Conversely, in Barbara and the Camp Dogs, design elements are kept to a minimum, allowing the actors and the tight band, Sorcha Albuquerque, Jessica Dunn and Michelle Vincent, to take centre (corner) stage.

Yes, set designer Stephen Curtis’ choice of carpet could be stickier and more threadbare in order to more accurately capture the feel of a grimy inner-city music venue, and the Doc Marten’s boots sourced by costume designer Chloe Greaves should be less polished and more battered (though her costumes instantly and effectively convey the chips on Barbara’s strong shoulders from the opening scene). Whereas Karen Norris’ lighting ably enriches the emotional content of the production rather than compensating for its absence, as typified by a scene where the rage-filled and self-sabotaging Barbara sits staring forward into gloom and shadow with her back to a golden, optimistic light. 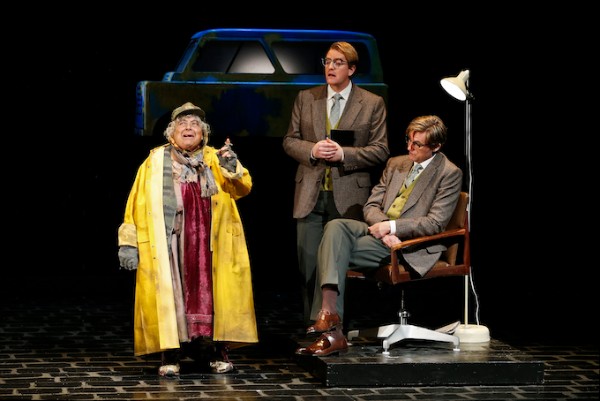 Viewed together, these two productions offer a stark contrast between programming choices and the aesthetic modes in which Melbourne’s two mainstage theatre companies operate.

Conservatively directed, and based on a text that feels decidedly dated, The Lady in the Van fails to delight. It meets expectations – at least those of the company’s subscriber base – but does not surpass them.

The production opens with the scene of a cobbled street, a high stone wall, and a wrought-iron lamp-post –  the latter instantly reminding my opening night companion of Narnia. If only the MTC’s production had half the magic of CS Lewis’ extended act of secondary creation.

Conversely, in the skilled hands of director Leticia Cáceres, Barbara and the Camp Dogs is both deeply funny and deeply moving; a big-hearted production that may just break your heart a little.

Yes, one or two of the songs could be easily cut without reducing the play’s impact, and late in the piece there are some lines of dialogue that feel expository (though this is made up for by an evocative description of place and some powerful moments between the lead characters, especially when the previously silent Troy Brady takes to the stage), but overall, it’s a vital, contemporary and electrifying piece of theatre, and highly recommended.