Portraiture is an old genre but the Macquarie Digital Portraiture Award at the National Portrait Gallery, Canberra showcases the best of its newest incarnations.
Jane Somerville
[This is archived content and may not display in the originally intended format.] 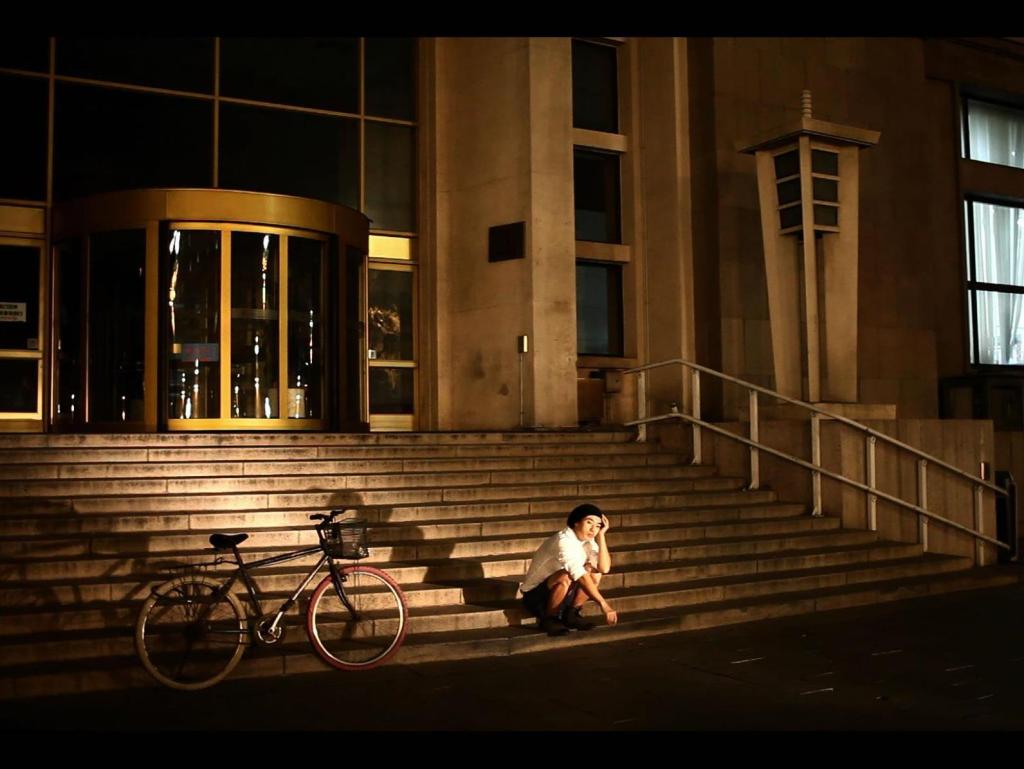 In our ever-changing world, humans crave connection. That drive for connection is the subject of the series of video portraits by Tiyan Melissa Kilie Baker that has won the 2014 Macquarie Digital Portraiture Award at Canberra’s National Portrait Gallery (NPG).

Baker asked people to recall favourite memories and re-enact them for her camera. Three of these reminisces are on show at the NPG until 23 November. Lost Love – Waiting for midnight at the Long Distance Call building on Chang-an Jie so I can call her, Beijing 1998, 2014, (pictured) depicts a young man sitting on the stairs outside an art-deco-style building. The image, with its stillness and strong shadows, is like a photograph subtly interrupted by the movement of the man’s hand as it rises to his mouth to draw from his cigarette. As the title indicates, the memory invokes a desire for communication in the days before mobile phones were ubiquitous.

For Baker the images of figures caught in dark stillness cuts across the fast pace of change in Beijing, where she lived for periods of time during high school, university and, most recently for an artist residency. As buildings are demolished and redeveloped, the memory of the city’s inhabitants are affected. Through this work, Baker ‘wanted to give people the opportunity to revisit their memories, go back to the places where they happened and remap that space as their own and preserve it in some way’.

Sponsored by the Macquarie Group Foundation, the new media portraiture prize – a world-first – is now in its third year. Open to artists aged between 18 and 30, the prize gives five finalists the opportunity to exhibit at the NPG. The winner receives $10,000 and the opportunity for professional development through an artist residency in alternating partnership with Perth Institute of Contemporary Art (PICA) and The Edge at the State Library of Queensland.

Dr Christopher Chapman, NPG Senior Curator and one of the award judges, said the residency was an integral component of the award, because it gives recipients ‘the physical and mental space to think about what their next project might be’. The winner has the opportunity to develop important networks and the business skills necessary to embark on a career in the arts industry. Baker will undertake her residency at PICA mid to late next year.

Chapman said defining a good example of a portrait in a screen-based medium was more difficult than in painting or sculpture. ‘It’s easier to define what it’s not: it isn’t just a performance to camera.’ He said a good digital portrait needed to be a work that ‘conveys the identity of a person’.

He nominates two international examples, coincidently both portraits of footballers: the 2004 London National Portrait Gallery’s commission by Sam Taylor-Wood of David Beckham depicting the renowned British player asleep; and Philippe Parreno and Douglas Gordon’s Zidane, a Twenty-First-Century Portrait 2006 which spliced footage from multiple camera angles of Zinedine Zidane over a single match to achieve a multi-layered perspective of the man and his work.

The NPG has been commissioning digital portraits for its collection since 2008 when it commissioned a self-portrait animation from cartoonist Bruce Petty and the video portrait of actress Cate Blanchett by David Rosetzky.

An animation by Imogen Henry titled Blue Wolf, 2014, weaves a loose narrative of childhood overlaid with the darker coming of age and experience of adulthood.

Coverruncover, 2014, by Phoebe Carmody is an animated drawing, the black outlines on the white screen referencing the traditional form of pen on paper. As the figure dresses and undresses, the work leaves the viewer reflecting on the notions of exposure and the internet.

Joseph Steven Knox’s Downhill, 2013, is a documentary-style film depicting the Knox’s love of riding mountain bikes with his friends. The colourful outfits of the bike riders contrast against the Australian bush as they traverse through the landscape.

A different form again is Xanthe Dobbie’s The Assumption of Virginity, 2014, which appropriates popular culture figures from YouTube into a contemporary moving interpretation of the religious frescos.

For Baker winning the Macquarie Digital Portraiture Award has resulted in a boost of confidence to her art practice. The appeal of working in digital media is the ease in which audiences can be involved emotionally in the work. Baker explains: ‘I love how in touch digital media is with wider society and how, especially with the internet, digital content is everywhere and there is a real dialogue surrounding it that you don’t see with painting or sculpture.’

Jane Somerville is a freelance writer and editor based in Brisbane.