A focus on access, environmental sustainability, and programming that grapples with some of the great moral questions of our time: the 2020 Adelaide Festival promises to provoke and inspire.
Richard Watts 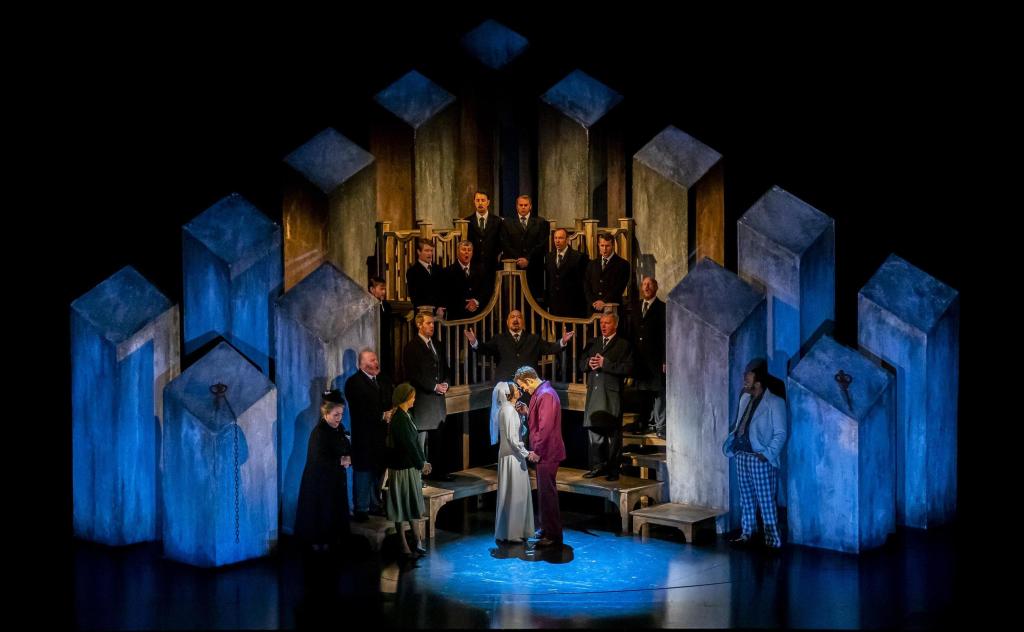 The carbon costs of flying the cast of Scottish Opera’s Breaking the Waves, including Sydney Mancasola (Bess) and Duncan Rock (Jan) will be offset by Adelaide Festival in 2020. Photo credit: James Glossop.

When the first Adelaide Festival was held in 1960, environmental concerns – especially around humanity’s impact on the climate – were a much less urgent topic than today.

Celebrating its 60th anniversary in 2020 has provided the Festival with the opportunity to break new ground by becoming carbon neutral – no mean feat given the vast number of international and interstate guests invited to Adelaide each year.

‘[W]e are proud to announce that the Adelaide Festival is the first major arts festival in Australia to achieve certification as carbon neutral. This is one of those “really useful” birthday gifts – a vital contribution to a future that we want our children to inherit,’ said Co-Artistic Directors Rachel Healy and Neil Armfield.

The Festival’s determination to become carbon neutral is no simple task given that staging just one production in 2020 – Scottish Opera’s Breaking the Waves (based on the Lars Von Trier film of the same name) requires flying the entire orchestra and chorus of Scottish Opera, as well as the original cast, to Adelaide. That’s a company of 61 people in total – and it’s just one of 74 events across the entire Festival program.

Armfield explained that the Adelaide Festival team is increasingly aware of the arts industry’s obligations to address the climate crisis – as well as the challenges of doing so.

‘It’s certainly something we’ve been aware of, and it’s something that artists around the world are becoming aware of,’ he told ArtsHub.

‘When I was in Edinburgh this year there were seminars and forums on the Fringe talking about the need for artists to travel by train wherever possible … and certainly it’s possible for European companies to travel on trains and along the ground, but in Australia, in South America, in North America and in Africa and Asia, festivals couldn’t happen if the artists weren’t – and some audiences weren’t – able to fly.’ Armfield said.

It would also stymie his and Healy’s ability to see and program work, Armfield continued, should they make a blanket decision to abandon all international flights.

‘Our movements around the other festivals of the world to see work and to kind of catch the trends if you like, would be very disabled,’ he said.

‘So the only way [forward] is to say: what can we do? We can put a cost on our carbon footprint and have that analysed and certified and audited by an outside organisation and that is put into a cash equivalent which just becomes part of the festival’s budget. And after the Festival it goes straight into a renewable energy program that’s developing in India – a specific windfarm in Gujarat, actually.’

The Festival’s carbon footprint has been estimated at just over 9000 tonnes. The cost of offsetting this by investing in a wind powered project in Gujarat, India is approximately $18,0000.

Festival-goers are also encouraged to take public transport, or ride and cycle to events, as part of the Festival’s ongoing sustainability plan.

‘We can put a cost on our carbon footprint and have that analysed and certified and audited by an outside organisation and after the Festival it goes straight into a renewable energy program that’s developing in India.’

Healy and Armfield have also programmed the 60th anniversary edition of Adelaide Festival with an eye to making it economically accessible, as well as more attractive to audiences other than traditional festival-goers. Beyond the usual free events such as Writers’ Week, exhibitions and forums, the 2020 Festival includes the likes of a free public artwork in Rundle Mall – a human-scaled dolls house by Japanese artist Tatzu Nishi – as well as a free opening night concert by Tim Minchin.

‘Tim Minchin is someone that people will generally pay top dollar to see,’ Armfield laughed, ‘so it’s a really thrilling thing to have Tim there, and to have events that are accessible, like Compagnie Carabosse’s Fire Gardens … And also through the Balnaves Foundation we’re launching a scheme called Tix for Next to Nix, where 1000 tickets are made available to financially disadvantaged people for $5 – and there’s also the pay what you can scheme, which is also subsidised.

‘So there is a real intention to make this a very accessible festival – as well as one that has to cover its own costs, of course,’ Armfield explained.

Other highlights include Buŋgul, an evocative celebration of the music of the late Gurrumul Yunupiŋu; 150 Psalms, a performance and city-wide exhibition celebrating the Old Testament’s Book of Psalms; contemporary Australian works such as Branch Nebula’s High Performance Packing Tape and choreographer Nick Power’s Between Tiny Cities and Two Crews; new productions by Adelaide companies Patch Theatre and the State Theatre Company of South Australia; and the Adelaide Biennial, the nation’s longest-running curated survey of contemporary Australian art, this year themed Monster Theatres.

FINGERS ON THE PULSE

While the 60th Adelaide Festival is addressing one of the important conversations of our time through its actions, other explorations of the cultural zeitgeist are addressed directly through the program.

Enter Achilles, a dance classic from Lloyd Newson and DV8 Physical Theatre explores toxic masculinity and the silencing of the working class; Kieran Hurley’s play Mouthpiece examines the ownership of stories and questions of cultural appropriation; and Almeida Theatre’s critically acclaimed production of Robert Icke’s The Doctor thrusts identity politics into the spotlight in a work praised by The Guardian as ‘one of the peaks of the theatrical year’.

Armfield said The Doctor is an incredibly timely work to stage in 2020 given that the great debate in Australia at the present time concerns religious freedoms. ‘Which sounds so high-minded but it can also be “the freedom to be a bigot,” as Brandis famously said. People are free to be bigots – it’s not against the law. But if it’s religion used as an excuse to peddle hate, to discriminate against people that disagree with it, or to be cruel, then it’s a really fundamental flashpoint in our society – and the work that’s come from the Almeida, The Doctor, is right at the heart of this debate of religious freedom – as well of course as the question of identity politics.

‘Can I be a director who just tells stories or am I always a white man from the lower middle class? [The play’s] Dr. Ruth Wolff, can she just be a doctor or is she always carrying her Jewish heritage, her female gender, her race with her?

‘And these are questions that ask: whose right is it to tell stories? It’s a really interesting debate at the moment and I think that sometimes the answers seem to be simplistic. But the job of a festival is to dig down and to really explore what the complexities behind those questions are.

‘The answers aren’t always simple and they’re not always the ones you want to hear,’ Armfield said.