More than 80 creatives have been commissioned to create over 40 art installations, 40 albums and stage 40 gigs across the city. All new work. All free.

Flash Forward is creating a connected network of laneways across Melbourne with their own stories, visuals and acoustic designs.Showcasing Melbourne’s creative culture and unlocking the potential of some of the city’s lesser-known laneways, more than 80 creatives have been commissioned to create over 40 art installations, 40 albums and stage 40 gigs across the city.

GOSIA WLODARCZAK DRAWING PERFORMANCE
Tuesday – Thursday, Saturday & Sunday 11am – 4pm, Friday 12pm – 5pm, until August 15
The Royal Arcade
‘Frost and Shadow Drawing for the City of Melbourne; Drawing Performance with the Modus Operandi in Contagion’ is a 21-day performance drawing and installation by Melbourne artist Gosia Wlodarczak. Watch Gosia at work on the glass facade and internal space of shop 8-10, in the city’s historic Royal Arcade.

YANDELL WALTON’S ‘END PASSAGE’
Every night 5.30pm – 12am, until Sunday September 12
Platypus Alley
Yandell Walton is an artist whose work encompasses projection, installation, and digital media that meld architectural space with the digital image. Walton has become recognised for her immersive installations that merge the actual with the virtual to investigate notions of impermanence in relation to environmental, social and political issues.

Melbourne Fringe Festival returns in 2021 with another bold and boisterous program. From 30 September to 17 October some of… 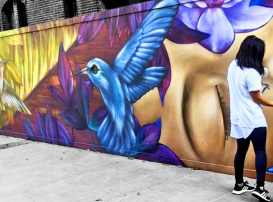 Interested in experimenting with walls and large scale murals? Want to diversify your painting practice? Want to get into murals…