How social justice and a pandemic are shaping Museum leadership

ArtsHub takes a look at the AMaGA discussion on leadership and transformative change for the future of museums and galleries, with a panel of experts offering pathways forward – starting with recruitment.
Gina Fairley 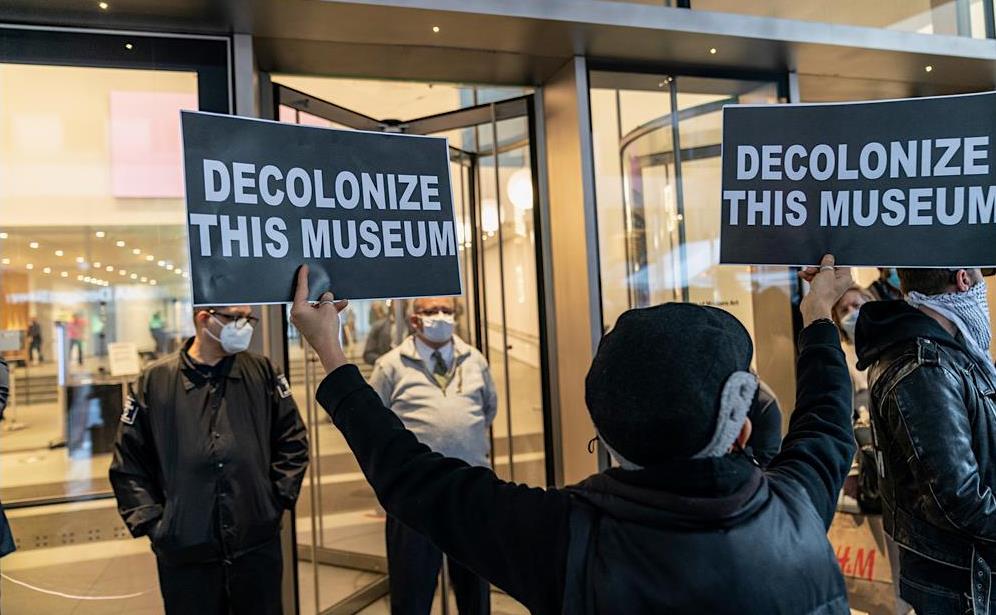 Activists rally and march against Museum of Modern Art board of directors, New York April 2021.

The Australian Museums and Galleries Association (AMaGA) is currently presenting its conference in Canberra at a time when discussions about the future of the sector are critical to getting the pathways right, emerging out of the pandemic.

However, in many ways, the pandemic took a back seat to more pressing questions around First Nations led voices, access and equity, sustainability, how the sector employs for its future. ArtsHub listened in.

The climate for the discussion was set up with a dictionary definition. Leadership is: ‘to cause to go with one, especially by guiding or by going in front and taking a person’s hand.’

But therein lies a problem. Rhana Devenport, Director Art Gallery of South Australia, reminded delegates that the recent explosive discussion over a revised definition of what a museum is today, by ICOM [International Council of Museums] remains unresolved.

Journalist and panel facilitator, Beverley Wang said that it adds to the great sense of urgency around this topic of leadership that the sector is feeling, one that has been fuelled by a desire for greater social justice and equity across our institutions, which requires trust to move forward.

‘When I read between the lines, you [the sector] want to talk about power, and power dynamics, and what it means to change within leadership,’ said Wang.

Sure, but the energy of this panel went beyond ‘talk’; it screamed the need for action and to harness the wins and momentum of the past year.

Changing the way we hire

Caroline Bowditch, CEO Arts Access Victoria, said that her appointment was testament to that commitment to cultural equity for deaf and disabled artists.

‘My predecessor Veronica Pardo believed that leadership needs to be authentic, so as a non-disabled woman she stepped aside. In the 45-years of AAV, my appointment in 2018 was the first disabled person to take the lead role,’ Bowditch explained.

Activist, human rights lawyer and independent curator, Armando Perla – presenting via zoom from his role with the Canadian Museum for Human Rights, and ICOM Committee on Ethical Dilemmas – said change starts with calling out racism, sexism and the many forms of oppression in museums, especially of marginalised communities.

Like Bowditch, he has witnessed a recent move by a number of museums globally to reappoint new CEOs, and to ensure their boards are also more equitable. Perla believes we need better systems – internally – so as not to obstruct the legitimisation of the change taking place.

It was a line of thinking picked up by Marcus Hughes, Director Indigenous Engagement at National Library of Australia and AMaGA National Council.

‘We just need to change the way we look at education qualification, or wisdom, and how that is build that into our position descriptions,’ adding, ‘It needs to be about EQ not IQ.’

Perla agreed. ‘We need to start valuing different types of knowledge, and we need to change the language of our postings to allow people to see themselves in those positions.’

Wang cited data from 2018, which showed that 64% of the museum and gallery sector has no CALD leaders, adding that there is still a long journey in transforming leadership.

Bowditch added that the latest Australia Council report, Towards Equity (released this week), says that today about 9% of the workforce has a disability, with only 3% in leadership roles.

‘A whole percentage prefer not to disclose, and that is understandable as there remains so much stigma of the knock on effect for their career,’ said Bowditch.

Devenport added that we tend to ascribe these positions to working with cultural materials and knowledge, but that ‘we also need to allow that space in the museum to work across a range of ways.’

‘The more vulnerable a museum is, the stronger it is; and to allow risk in to that platform for that to occur.’

During Hughes’ time at Powerhouse Museum he was charged with recruiting a team of eight registrars to look after the Aboriginal and Torres Strait Island collections. ‘First they come in as visitor services officers and develop a rapid sense of ownership, which gave them the confidence and skills to want to do more … It is finding the leverage point where those young ones could be responsible for the knowledge, with integrity and authority.’

Hughes continued that while this ‘mob had no tertiary training, they have deep cultural connection to this business, and for that reason they have the intelligence to do the important work the museum wants them to do.’ 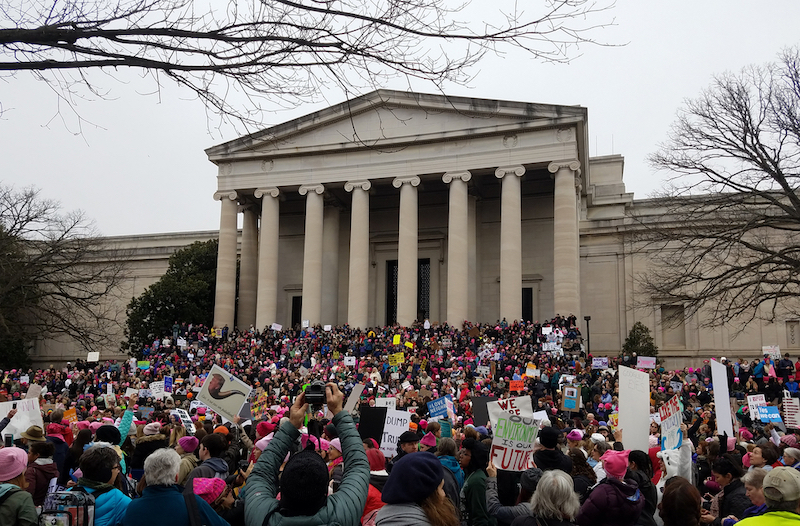 The leadership question that keeps you awake at night

For Bowditch that question was how to better address the limited – almost non-existent – disability representation in galleries around the world.

‘How is diversity represented, and who is creating the narrative and telling the stories? How are you working with those quieter and marginalised voiced to ensure accurate representation is achieved, and no one is left behind?’ asked Bowditch of the room of museum workers.

‘We saw hundreds of museums called out in U.S, in the U.K., Australia, this past year – it is happening globally,’ said Perla. ‘The systems we are working under have failed and it has left us [mafginalised voices] outside. How do we build new systems that work for everybody, and not just one small [bit] of the population?’

‘As long as we don’t recalibrate this power, we will continued to face the same problems,’ said Perla.

Wang pointed delegates to the Instagram account @changethemuseum, where rank and file museum works can call out racism in the workplace.

For Hughes, the greatest concern leading to sleepless nights was ‘the absolute concern for leadership fatigue’, experienced by First Nations arts leaders. He said that culture is not a nine-to-five job.

‘What that does is create a space where, when we leave the temple [aka the Museum] at 5pm in the afternoon, we don’t leave the business there; we take that with us. It is a whole of life experience.

‘Indigenous curators carry this extraordinary burden, far beyond their curatorial role with this aspect of cultural knowledge across an organisation,’ added Devenport.  As she stepped through her experiences of pulling in diverse and authentic voices into the museum, she made the point that collections have never been so important as they are today.

Bowditch said that COVID has brought the conversations of relevance and equity into sharp contrast. ‘The [current] system is benefiting one part of the population, and we have seen through COVID time that it was a leveller for the disability community. Everyone had a taste of isolation which our community lives on a daily basis.’

‘Many things we were told couldn’t happen, did overnight because the [abled] populated needed it – [access to] education online, telehealth, arts intuitions could open doors because wanted to continue to engage. The challenge is how do we keep our learnings from 2020 alive and not revert back,’ asked Bowditch.

She said that the information and data feverishly gathered during 2020 shows that the general population no longer want to see the same stories.  ‘They want to see diversity; they want to see different stories. Our relevance will dissolve very quickly if we let it. So how are going to listen to the truth of the community [in that data] and enact it?’

Bowditch’s implication is that we ask for the truth in all these surveys and research platforms, but then we don’t do anything with it, other than report it as data. This is where we need to become better leaders.

Band-aid change over a flawed system

Perla said that the commonly touted response to decolonising the museum is: ‘The only thing we can do is make it less harmful.’ He believes that this is a only ‘a process – a means to an end – but not the end in itself.’

When asked with the often asked question “what can I do”, Hughes quoted Uncle Bruce Pascoe: ‘you can get out of the way’.  He said it is about our CEOs, Boards and leaders trusting the cultural authority of First Nations peoples in your intuitions.

‘In our Reconciliation Plan it recognises that our collection has the power to heal and the power to wound,’ said Hughes. ‘There is that absolute acknowledgement of the power of our collections. [But] we have to rethink what we think we know, and to come in to an environment where the chief leader and custodian has that approach … Understanding starts to give leverage to that space when First Nations values can be embedded in the GLAM sector.’

What leadership needs for future change

‘It is a place of constant negotiation, and if we take anything for granted and build on previously held assumptions, that’s dangerous,’ said Devenport. ‘The process of being self-reflective, self-critical, and to invite conflicting critical voices in, and let them be heard at every level of the organisation.’

Devenport added that ‘the more vulnerable a museum is, the stronger it is; and to allow risk into that platform for that to occur.’

Bowditch said that it is not that difficult, we just need to allow diverse representation and voices to sit across every part of our organisations. ‘We are not a marginalised group.’ She continued: ‘What I don’t see, is the curatorial eye, or work presented through a disability lens, in our museums and galleries. We see more in disability festivals.

She closed with a quote by Dominican writer, Junot Diaz – ‘vampires have no reflection in a mirror’. ‘This idea that monsters don’t have a reflection… I want to create mirrors of our society that reflect the true diversity of our community and share that without shame. While our First Nations community is surrounded by guilt, disability is surrounded by shame. And part of addressing that is being able to see ourselves and have our voices reflected back to us,’ Bowditch ended.

This is the mirror of leadership’s future.