A satirical and ferocious reappraisal of Australiana kitsch through a poetic Indigenous perspective.
Raelee Lancaster 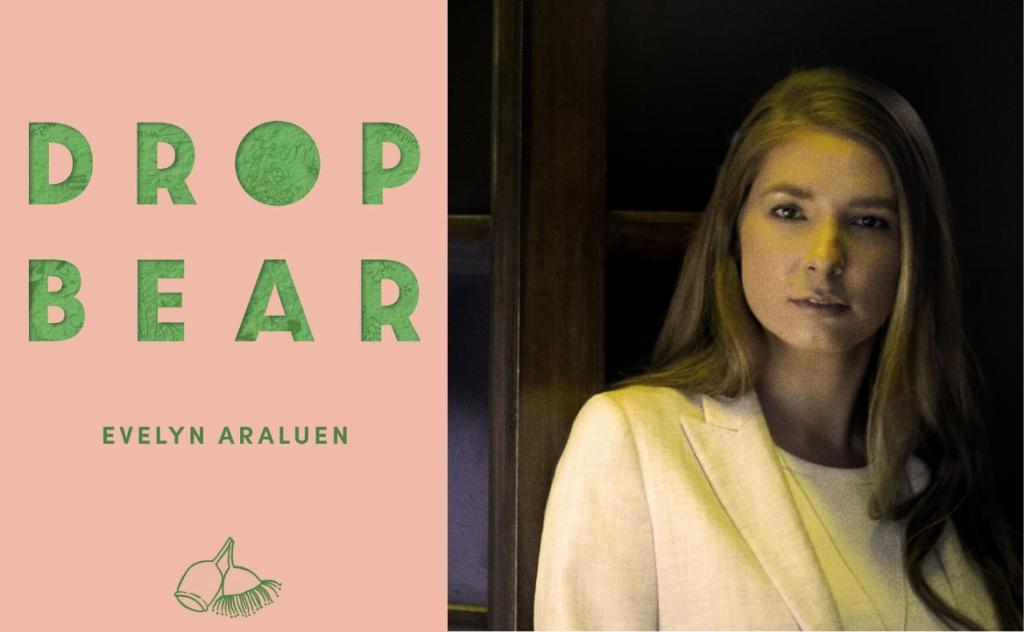 A disassembling of Australiana and colonial fantasy, Evelyn Araluen’s debut poetry collection, Dropbear, is a lyrical and satirical collection full of punch and purpose. Araluen delivers this through the subversion of genre, pop culture criticism, political commentary, and evocative imagery. In ‘The Trope Speaks’, the repetition of ‘The trope’ undermines the validity of the Australian gothic genre – a genre that situates Australia as a macabre landscape that is harsh and untameable. Further, the poem juxtaposes the colonial use of the land with a vision of dead Indigenous persons: ‘The trope sleeps in a homestead built over bones.’ Meanwhile, ‘The Ghost Gum Sequence’, one of several prose poems in this collection, encourages this undermining of Australian gothic by vividly depicting environmental destruction, where land is manipulated for selfish agendas.

‘I’ve seen South
Creek swell this plain they’re cutting up for lines of neat
houses all along this way, but they’ll never come for the scrub.
They need this scrub to keep the ghosts in.’

The deconstruction of the colonial fantasy – which inherently situates Indigenous peoples as a problem to be fixed or obliterated – is explored further in the collection with pop culture criticism. From ‘Index Australis’ and its nods to Crocodile Dundee and Picnic at Hanging Rock to ‘Mrs Kookaburra Addresses the Natives’, Araluen uses satire to pull iconic Australian media apart and leaves it exposed for the reader to examine like an augur. This technique is used expertly in ‘Fern Up Your Own Gully’, a commentary of the 1992 animated film, Fern Gully: The Last Rainforest. Again, environmental destruction at the hands of settler-colonists is at the forefront. The absence of Indigeneity is evident in satirical lines like ‘dreams of cassette radio/of blond boys/of defensible monarchies’ and hits home in the last passage where ‘me and my ancestors sit… RIGHT     WHERE     YOU     WROTE     US’.

Lines of uppercase as a literary technique for political commentary is used throughout the collection. It’s more prominent, however, in poems like ‘PYRO’, which considers the 2020 bushfires. ‘PYRO’ juxtaposes the image of the ‘THIN WHITE/MODEL’ who uses the tragedy of’ ‘THE THRICE-BURNT CHAR OF A HOMELAND’ for social capital. In this case, the politics in Dropbear are explicit. There are political themes, however, that feel more subtle. For example, the concept of treaty, and specifically treaty with land, can be amassed in this collection.

Araluen is an expert at imagery and uses the reoccurring motifs of birds and the ‘leaf and branch’. These motifs neatly tie the collection together. They also highlight the need to listen to and develop treaty with land. ‘To the Poets’ enforces the autonomy of this land by asking, ‘Did you listen?/Do you understand that the land doesn’t need any/of us?’ In ‘Learning Bundjalung on Tharawal’, Bundjalung language is inherently tied to topography. To speak Bundjalung is ‘to teach my voice to rise and fall like landscape’ and to ‘sing like hill and saltwater’ In ‘Unreckoning’, land dictates both language and ceremony, with the speaker being the one to follow direction from the earth.

‘there is speaking in the rustle of leaf and call of bird.
These are the words the land knows, for it made them in the
cradles of country, in the salt and sand of sound. Songs carry
through track and tract, lines are traced so the living know where
to dance.’

All in all, Dropbear is a reclamation. It peels back the layers of so-called Australia and relishes in its unravelling. Australian gothic is explored from an Aboriginal perspective, unveiling the bones beneath the bedrock. Climate disasters caused by settler-coloniality are called out. And, finally, land is returned to its rightful place as central to life’s cycle.

Dropbear is a must-read for fans of the gothic genre, satire, nostalgia, and hitting back against the colonial norm