Shown where the NGA's International Collection sat traditionally, Australian women artists have usurped the power position with Know My Name - a gesture not lost on many.
Gina Fairley 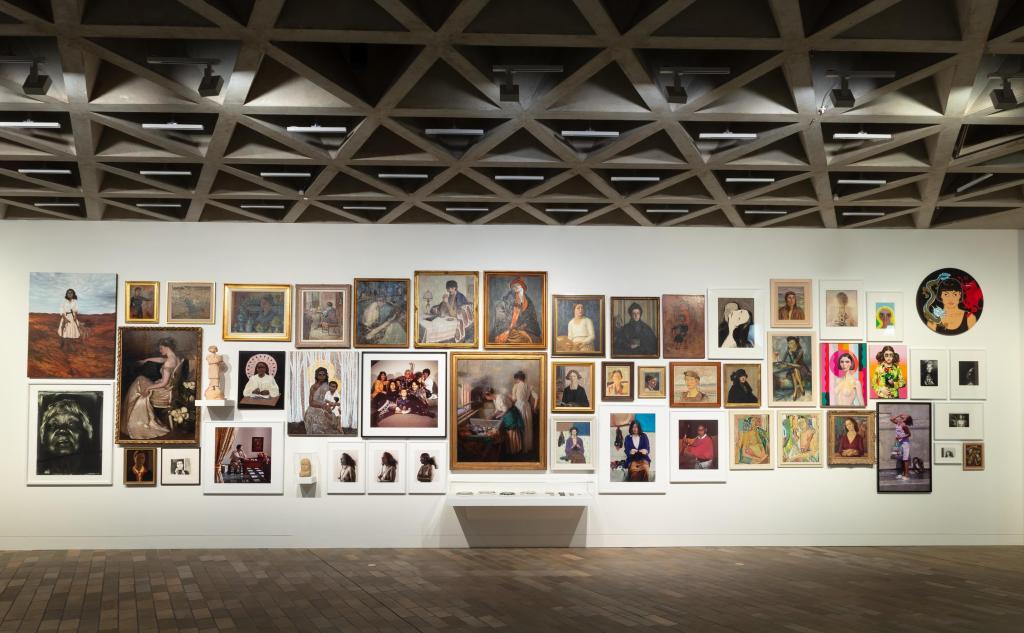 Speaking with National Gallery of Australia Director Nick Mitzevich, he was adamant to emphasise that the gallery’s long awaited rewriting of the art history of women artists at the institution – the exhibition Know My Name: Australian Women Artists 1900 to Now – is not a survey, ‘but rather a series of vignettes’.

It is the kind of advisory precursor one might expect, given that the lens of a survey would always herald glaring omissions.

So putting aside the “who would I have included?” game; the quick impression over this enormous show of some 170 women artists with around 350 artworks is that it is carefully metered – not in terms of checks and box ticks across periods in art history – but thematically drawing on the milestones that have shaped the landscape for female artists working in Australia.

It’s boldly inter-generational, cross cultural and non hierarchical. In other words, a new story charted from the perspective of women; not men. And, the inclusion of First Nations artists steps well beyond token inclusion, and if fact, has a weighty presence.

‘It’s not a survey, but rather a series of vignettes.’

Lead curators for the exhibition were Deborah Hart, Head of Australian Art, and Elspeth Pitt, Curator Australian Paintings and Sculpture. They were joined by a curatorium from First Nations to Design curators.

It has to be said that Know My Name is more than a single art exhibition. It will be staged in two parts: the second phase of the exhibition opening in July 2021; it is accompanied by a major publication which calls on the voices of women artists, curators, academics and writers to situate the work of the artists in the exhibition.

Plus it sits within the broader Know My Name project, which has included a partnership to oOH Media to plaster the artworks of women on billboards across Australia, and last week’s conference, of the same title, with the premise of debunking frameworks around feminism and representation.

All drawn from the National Collection, it is a firm signal that the historic holdings – sitting at just 25% by women artists – are being dusted off, expanded, and deeply celebrated.

This hang sits where the Gallery’s former shop was (since moved to the entry level), and part of Mitzevich’s grand plan to return the building to architect Colin Madigan’s 1968 design (it opened 1982).

Know My Name launches this new gallery space, complete with a restoration of original tiling and the removal of air ducting and auxillary walls.

It is a worthy threshold to the exhibition, countering the past with one of the later works in the exhibition, a video by the Barbara Cleveland collective, Bodies in time (2016), which explores the life and legacy of their namesake – a mythic performance artist who they claim to have recovered from the margins of art history.

It is like the “town crier” for the message that is embedded in this exhibition. Similarly, the notion of the collective takes both a metaphoric and conceptual position in this atonement, that is Know My Name.

While I ventured forth into a trajectory of contemporary narratives – and perhaps I took it the wrong way – the flow through this exhibition offers a circulatory route, which in itself, a rewriting of history should really do. There is no right or wrong here. It adopts the Indigenous notion of Everywhen, when past, present and future exists as one.

And that is the total joy and liberation this exhibition presents. It dusts of those male-traditional roles of categorisation, and shines.

SO WHO GETS A NOD?

This entrée leads to a series of epic works, starting with Micky Allan’s multi-panel painting from 1982, to the recent acquisition of eX De Medici’s 7-meter work, The wreckers (2018-19), and Barbara Campbell’s hovering text-adorned skirt, Dubious letter, which was used in a performance work titled Cries from the tower, and involved the artist unraveling the embroidery. It prompts: Do it! Let’s start the unravel.

Beauty is a veil for deep commentary carefully mapped by the curators.

Here also, Kathy Temin’s faux-fur memorial challenges the idea of monuments as heroic sculptures (very apt in this Cook year), and is beautifully anchored against the works of Marie Hagerty’s deposition (2012) and Rosemary Laing’s signature series of photographs of bridal floating in blue skies. I can’t help but pick up on the suggested tone of elevation.

This gallery was where the International Collection was traditionally presented, and that is has been usurped by Australian women artists is a gesture not lost on many.

Next is a serious nod to the tenants of abstraction, with an entire gallery dedicated to the lofty journey, from a 1946 painting by Dorrit Black, Grace Cossington Smith and Clarice Beckett (c1925-30), in a nice segue to an atmospheric painting by Gemma Smith Cusp (2019), just shy of a hundred years on.

These threads are here, but are not delivered with sledge hammer bravado. That is left to the audience to find their own pressure points of connection.

It should be noted that while Vongpoothorn is given air-time here, and Lindy Lee of note, there is not a huge swag of women artists from diverse cultural backgrounds and reflective of Australia’s long history of migrant heritage, that has contributed to this art history. Perhaps part two better address this?

Moving on, the next gallery steps through another chapter, with works by Julie Rrap – the full suite of performative photographs, Persona and Shadow, Tracey Moffatt’s iconic Something more (1989), Anne Ferran’s Scenes on the death of nature I-V (1986), which depicts women as passive subjects, and sculptures by Barbara Tribe and Sanne Mestrom central to the gallery.

Pretty much made within an envelope of around five years in the mid to late 1980s, these works boldly mark time.

The exhibition then changes tone slightly. Misses Hamson’s The Westbury quilt, reaches back to the turn of turn of the 20th century and is the earliest work in the exhibition, typically turning to embroidery to bridge narratives of Victorian loss and her colonial awakening in Tasmania.

It sits within sight of, again another vast salon hang, prints created at women’s refuge centres, and championed by activist printmaker Alison Alder; and Vivienne Binn’s textile work Tower of Babel, similarly made collectively. Both touch on the role of women and community.

Also in this sweep of works is rea’s Resistance (flag) (1996) and Raquel Ormell’s Australia rising #2 (2009) that both pick up the tenants of activism, but with the soft glove of female-associated medium of textiles, made from doona covers, aprons and tea towels.

The sense of flow continues comfortably for the viewer, who on turning the corner finds that materiality and use of found objects continues, faced with two works by Rosalie Gascoigne Monaro (1989) made from Schweppes drink crates, and Feathered fence (1979).

They speak of land and the capacity of Country to speak of home, and are appropriately partnered with works by Mavis Warngilna Ganambarr, Nongirrna Marawili and Bea Maddock.

Also in this room is Janet Laurence’s Requiem (2020), a new work that ‘examines our cultural and conflicted relationship to the natural world’ and the intersections of art, science and memory.

It acts as a kind of bridge of ideas, both linking and questioning systems of categorisation from Indigenous to non Indigenous, and the weight of the male authority of the museological frame. For me, in many ways this mash up of time, philosophies, and gendered frameworks in these small groups of works is like a microcosm for the larger, Know My Name exhibition.

The tone deepens again at this point – honing the viewers lens to a First Nations consideration and a very deliberate “writing in” of histories, with works by senior artists and elders Judy Watson, Sally Gabori, Queenie McKenzie, Emily Kame Kngwarreye, and  from Utopia Jeanie Pwerle and Rosie Kgnwarray.

They hang with Fiona Hall’s work Tender (2003-05), which refers both to legal tender of shredded American bank notes shaped into birds nests, and a word for care. 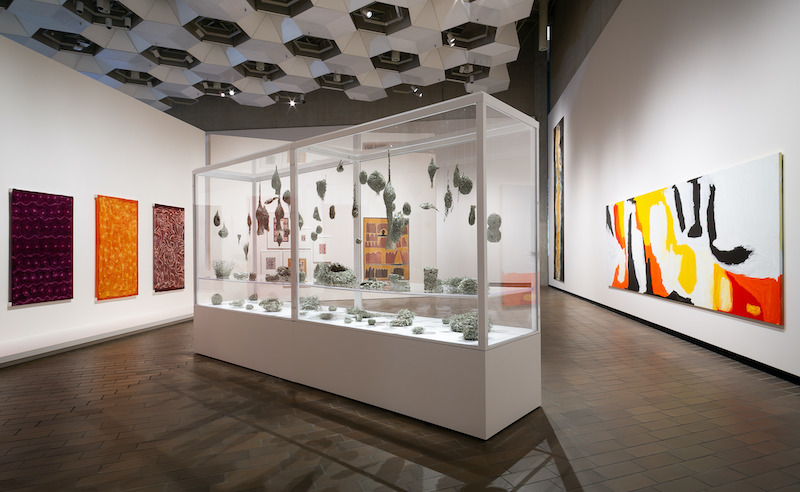 It is an interesting juncture in the exhibition. Kngwarreye represented Australia post-humously at the Venice Biennale in 1997; Tracey Moffatt twenty years later in 2017– the only two First Nations women to do so; Gascoigne and Hall also had the honour 1982 and 2015 respectively.

They are like a metronome ticking through time – counting inclusion and recognition – in an art world constructed to allow little favours to women.

There is also a strong environmental pulse and messaging across these three gallery spaces from Laurence to Hall to the Seven Sisters works, which speak of nurturing and care – an intuitive connection to “mother earth” – and less about the politicisation of Country.

Finish up with (or start with), these Seven Sisters join as a suite of pokerworks Coolamons by Topsy Tjulyata and a new installation by the Tjanpi Desert Weavers, commissioned for the exhibition. While it has quickly captured the imagination and hearts of viewers, I struggled with the kind of “beam me up Scottie” feel, and felt it lost the playful tight energy that is so endearing and inspiring in many of their installations. 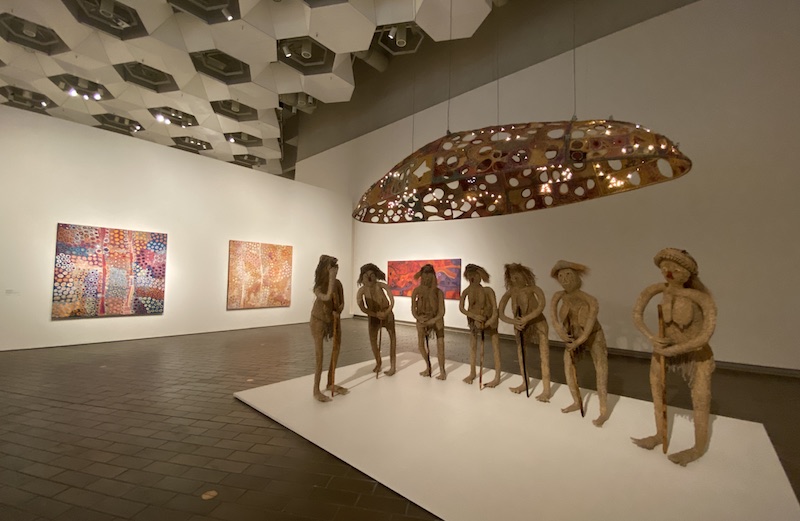 It is an interesting finishing note that circles back to the very first image presented in the show, that portrait by Brenda L Croft of Auntie Matilda as a great law woman and custodian of cultural heritage for women.

Mitzevich told ArtsHub that 60% of the exhibition was drawn from the Gallery’s holdings, with 20% loaned in and the remaining 20% in new acquisitions and commission to grow the Collection. Time is immediately concertinaed; time is immediately present and past.

Postponed from its original May opening due to the pandemic closure, the additional planning has resulted in an expanded and more comprehensive exhibition, added the gallery.

It is clearly our win.

From 2014-2018 the percentage of women exhibited (not only collected) by the NGA had fallen from 27 per cent to 25 per cent. Know My Name in its two parts is a solid wallop to scales, but more so, offers a trajectory of normalisation, rather than the “add on” box tick.