As Executive Director of Sydney Living Museums and NSW State Archives and Records, Adam Lindsay oversees 12 organisations. We talk to him about leadership in crisis and finding your mojo in the digital pivot.
Gina Fairley 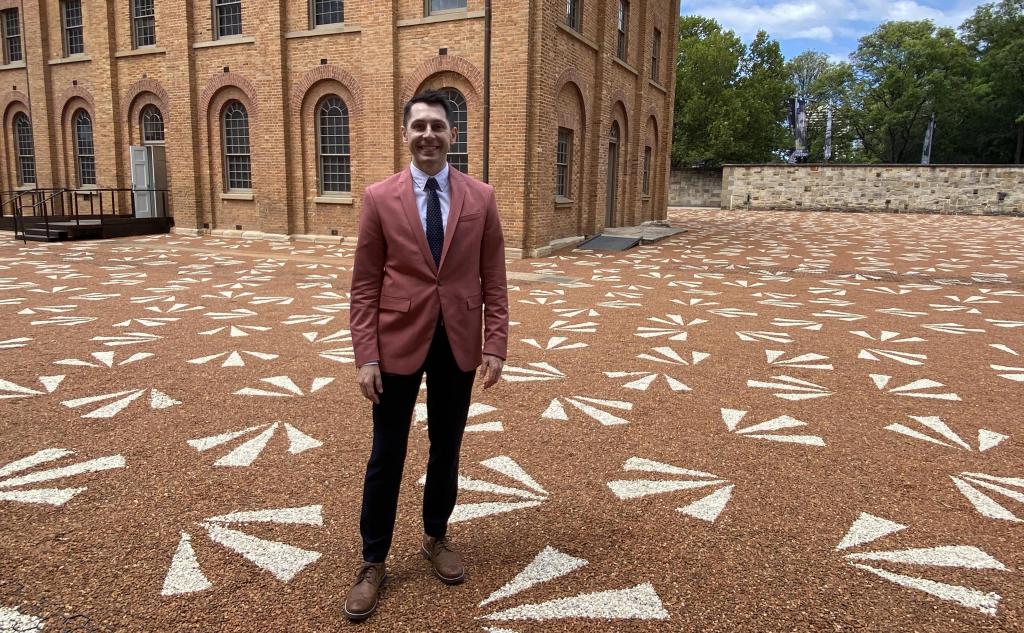 In the ten-months that Adam Lindsay has been leading Sydney Living Museums (SLM) – a suite of 12 individual museums and collections across a broad footprint – he has managed a total digital overhaul, worked with an international leader in digital storytelling to rethink the visitor experience at Hyde Park Barracks and delivered a building refit on time. Mere weeks after reopening the Barracks, COVID-19 struck, and he had to move 12 orgs, their professional staff, and over 4,000 members and volunteers into shutdown programming.

‘In some ways, when the pandemic hit we dealt with the closure of our sites, it was a bit of a relief – we needed the rest! But we also recognised this as a real intervention into the way we are currently connecting with our audience,’ said Lindsay.

He said the greatest challenge in leading his team through this crisis has been trying to get it right for everybody.

‘There has been an enormous amount of challenges in keeping this large group, across different professions and personality types, motivated and strong. When you are the strong leader you need to be aware of the position, that “He just doesn’t get it from my point of view”… I feel that sense of responsibility in not alienating anyone.’

Lindsay continued: ‘It doesn’t mean that everyone is going to be happy and agree, but to have an empathic understanding and keep moving through it together. The whole executive, what are we doing to cope with COVID-19, is a result of that thinking.’

The way Lindsay has managed that suite of organisations and stakeholders through this crisis was a staged approach.

‘It’s not rocket science. Firstly it was all about communication – the entire organisation would hear from me multiple times a day why we were doing certain things, and then I was going and visiting front line teams and modelling the behaviours of the team.’

Lindsay said his approach as a leader was to allow people to feel more in control of this situation.

‘When we realised we had to close the museums, we chose to anchor our team by focusing on the familiar, and we found that in the objects and learning about them. This is primarily done through physical access so that was the great challenge we faced – to continue to fulfil that mission.’

‘It comes back to the role of the cultural professionals to deliver audiences what they want, but also to deliver them what they don’t know they want, and to do that in a digestible audience-focused way,’ said Lindsay.

Paradoxically, that was done by removing content. ‘We have a diverse organisation and it feels like a kaleidoscope of content, so we said, let’s take some things away to highlight what we have left there.’

He added: ‘It is us saying here is what is getting us through, rather than just here is a bucket load of content because we are diverse, so go for it.’

Lindsay believes this approach removed elitism. ‘You don’t have to have an art history or history degree to engage with these objects – it is more democratic – and the message is that we can all interpret history; we are all living history and now is the time to promote that message to audiences.’

Lindsay has both a business and an arts degree with a curious major in peace and conflict studies. One of his first management roles was with the Australian Department of Broadband Communications and Digital Economy, where he was charged with expanding a digital footprint to regional and remote communities.

He continued: ‘For me COVID has taken us back to the principle of why these institutions were set up, and that was to cater to local audiences and share stories. We are witnessing a resurgence of connection and a localism, and it feels great.’

Lindsay also points to his former boss in this role, a woman he described as embracing the raison dêtre “to crash or crash on through”.

‘I grew up with a lot of strong women as role models. As a gay man my life was not gendered, so the concept of gender in workplace for me was a first, and they were important lessons,’ he added. 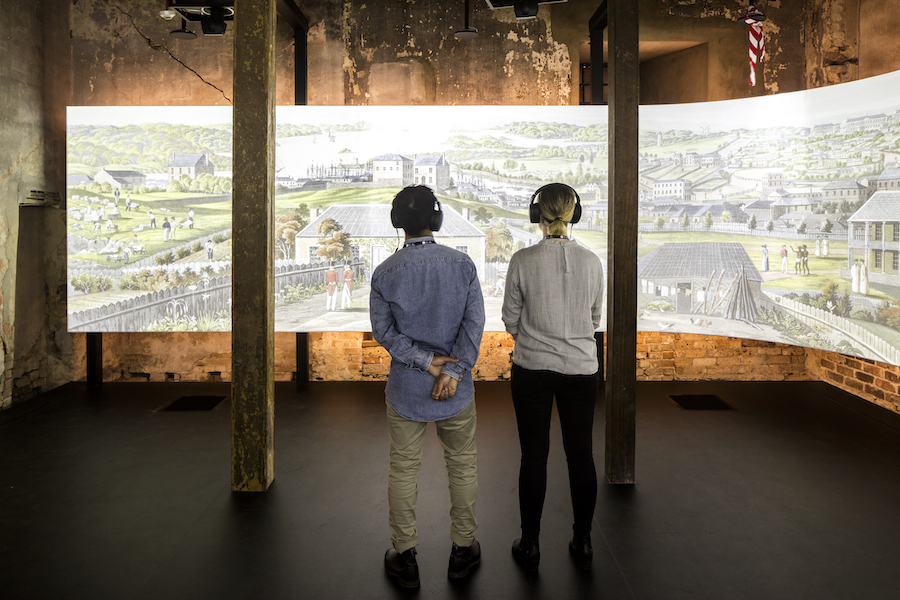 GOOD LEADERSHIP IS THINKING OUTSIDE THE BOX

One of the hardest roles of a director is to manage the duty of care to the collection alongside the care and wellbeing of staff. Lindsay say that it has been additionally challenging as a result of the push for arts organisations to self-generate more income, resulting in more professional needs under one roof.

‘We have not only traditional museology and archive professionals, but then add logistics staff such as venue hire and event and programs on top of that enormous set of people.’

It doesn’t mean that everyone is going to be happy and agree, but to have an empathic understanding and keep moving through it together.

The third phase of Lindsay’s COVID-pivot was enlightened.

Lindsay set up an internal skills market place across the 12 organisations. ‘As there was a skills reduction in their duties, our team could register their skills, go in and log a work package and HR could match up their skills. For example, one person turned to writing a new policy for Vaucluse House, and many have channelled their resources into digitising collections.

‘We have been able to keep people in meaningful work,’ said Lindsay. ‘We also wanted that democratic philosophy we have towards our audiences to be one we are living and breathing internally.’

‘I take advise and wisdom, and make decisions upon that. The job of leader is to be decisive after listening and considering all relevant advice.’

He believes that creating space for that advice is being ‘consultative in the truest sense of the word – to get the best outcome.’ He continued: ‘There is a chronic lack of fun in organisations – and in this time, what is expected in leadership is someone willing to create fun and enjoyment.’

Lindsay added one of the greatest lessons in his management style and strategies came from his grandfather. ‘He taught me never to miss an opportunity to do something kind – it may not always be the best decision for the institution, but you need to do it in a kind way. And when we started to work through our COVID strategy this had to be central to that planning.’

Lindsay is the first executive to bridge the SLM and SARA in their long history.

‘It was a fairly unprecedented, to move one CEO over two institutions like this, but the advantages are enormous. Curators, historians, conservators, logistics professionals – all have much wider projects to work on. For example, materials and textiles works held in SARA’s collection SLM conservators can work on, while paper [objects] in SLM, SARA might be better placed to work on.’

He continued: ‘The experience for those professionals is really important. If you are a curator or conservator who works at state-based institution and specialises in those areas, it is not uncommon to reach a mid-career slump, as they have reached the top of their profession. This exchange adds to a richness in their careers.’

At SARA, Lindsay has accountability for a cultural asset comprising more than 14 million items, with a financial value of $1 billion and a cultural worth beyond measure.

Before stepping into the Director’s shoes of SARA and SLM, Lindsay spent three years in Brisbane as Assistant Director, Queensland Art Gallery / Gallery of Modern Art (QAGOMA) – a time which he described as a great lesson in clever acquisition modelling and ushering audiences in new ways of thinking.

WHAT KARL LAGERFELD HAS TO DO WITH REOPENING STRATEGIES

Like many in isolation, Lindsay has been reading. He has turned to fashion icon Karl Largerfeld’s essays during COVID.

‘[They are all about] what he did when he took on Chanel, and how he separated the Chanel and Fendi brands. They are a great example of giving audiences what they want. How did he do that? He captivated new audiences and young audiences, and laid bare their operation in a branded way,’ Lindsay said.

That meant exposing the inner workings of the enterprise in a way which was consistent with the overall identity.

Taking that thinking into COVID times, Lindsay said that transparency will be key to reopening strategies. Take the use of audio headsets for example. ‘We are working with the assumption they will expect us to have those [cleaning] measures in place, but now we do it up front and display proudly our cleaning, rather than in a separate room like dirty laundry.’

The have also highlighted two-step cleaning, encouraging visitors to be proactive and clean before they use. ‘We want to make sure they are aware of the rules, but also say you have a responsibility too. We have a tendency to over-infantilise audiences,’ Lindsay said.

‘If we let [people] behind the scenes and see the machinations of our museums, then they might want to visit us more – older audience find that interesting, while younger audiences expect it,’ he added.

Read: Why members are critical to your re-opening strategy

Other measure Lindsay and his team have put in place, is access time ticketing to manage the yield in the space and single flow visitor traffic.

‘We will bring members in for exclusive visits and help test some of those flows. It is not a one-way relationship, and that is how you grow future donors and make every action that you do democratic,’ added Lindsay.

Sydney Living Museums will reopen its venues from 1 June.