This sculpture event is a stellar example of how philanthropy can help artists take a deeper dive into thorny topics, while growing audiences through the popularity of sculpture.
Gina Fairley
[This is archived content and may not display in the originally intended format.] 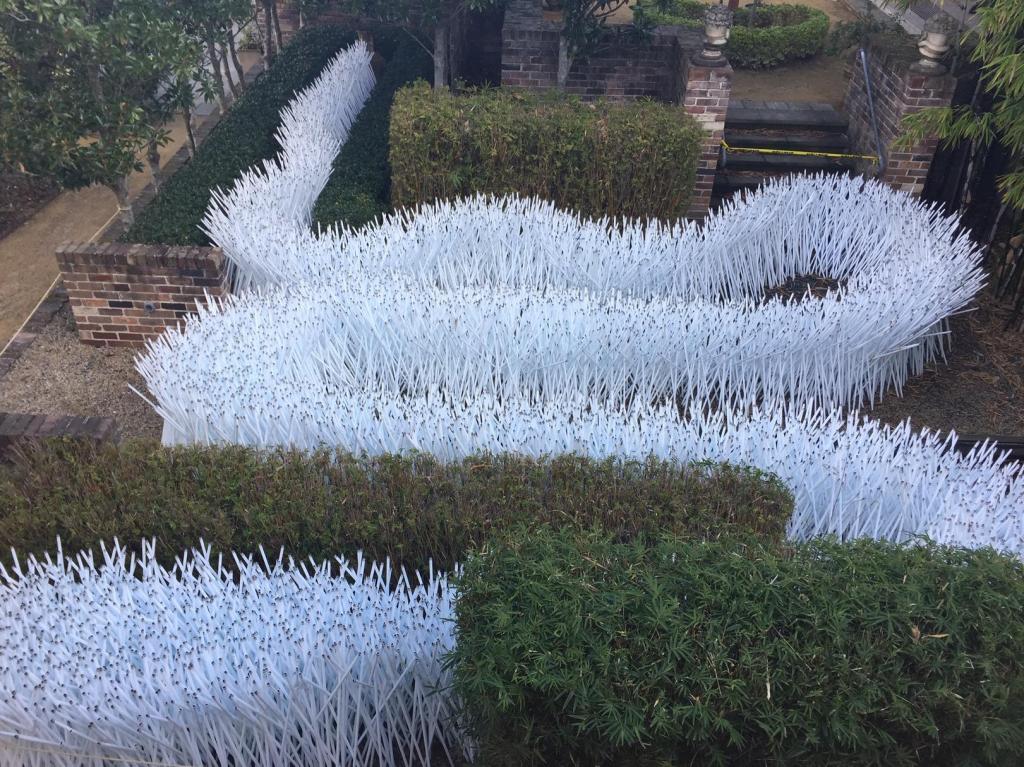 The outdoor sculpture event has become a popular way to view art, almost becoming an industry of its own in the last few years, as we have been witness to sculpture walks along coastal boardwalks, dotted through vineyards, within rainforests and even in limestone caves

The common ground is that people love them. They offer a way to engage with sculpture in an environment that is less ostracising, and that allows art to become part of the everyday passage of activities – dismissing antiquated elitist gongs.

Eden Gardens has become part of this trend. Essentially a commercial enterprise (as many of these sculpture events are), this florist, nursery, recreational garden and event venue in the outer Sydney suburb of Macquarie Park is a remarkable example of corporate philanthropy.

Unearthed captures the passion of owners Simon and Anna Ainsworth. In its fourth edition this year, 42 artists have been supported to make new work sited across the 2.5 acre property.

While such open calls typically lead to a discombobulated spray of artworks, Unearthed attempts to harness the conversation by focusing on environmental issues of the day. Some artists have managed the brief superbly; others less so.

Incredibly impressive is Jan Cleveringa’s work The Corporate Snake (2019), which reuses 17,000 fluorescent light tubes. Cleveringa said: ‘The viewer is staring at $127,500 worth of reimagined, non-redistributed waste.’

Detail from Jan Cleveringa, ‘The Corporate Snake’ (2019); courtesy of the artist. Photo: ArtsHub.

As an ephemeral artwork, it asks questions of sustainability, redistribution, and the extreme levels of waste in contemporary society. He told ArtsHub that the installation suggests that a good start for change lies in rethinking Corporation Law by introducing a ‘sunset clause’ – that is, a condition to be embedded in the legal process of incorporation that once a company reaches a certain size, it has to contribute back to the community by donating resources.

While the piece is conceptually provocative, it is also visually sexy, snaking its way through these established gardens, metaphorically weaving disruption into our latte-sipping, asset-accumulating 21st century lives.

Cleveringa was awarded the inaugural $10,000 non-acquisitive Eden Gardens Art Award for his sculpture.

Similarly, a stellar work by Marta Ferracin uses the Eden Gardens’ site, seducing us with its subtle beauty into provocative thought. Forget me not hovers over the Eden Gardens water reservoir, utilising irrigation tubing and drip watering systems. The effect is a rippling pool that speaks of the fragility of our water sources, and the need for better management. 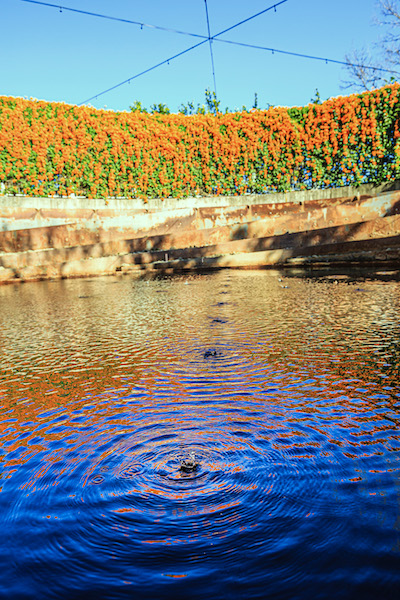 What is lovely about this installation is Ferracin’s consideration of the sound, wind and light that a simple drip of water can make upon a reservoir. There is an almost alchemic quality, and it is a reminder that, through the simplest of gestures, we can make a massive impact. All it takes is a little respect for that resource.

Other pieces that use the site to trigger conversations include Gemma McKenzie-Booth’s Wingspan, which uses broken umbrellas to create a canopy in the trees, inspired by the camps of grey-headed flying foxes nearby which have had to adapt to urban encroachment of their natural habitat.

Eden Gardens is pinned between Lane Cove National Park and the M7 Motorway and sounds from both are a constant reminder of that pendulum swing from untouched beauty to human impact.

Christopher Trotter’s Colony, on first glance is a cluster of vessels in a reflective pool. While it might appear conventional, for Trotter it they are living entities that reference ‘the loss of habitat and specialised ecosystems occurring across the world through climate change, land clearing and other man-made interventions.’

Over the course of the six-month installation, organic colonies will grow over the surface of the vessels, effectively a natural activist action reclaiming man’s detritus. 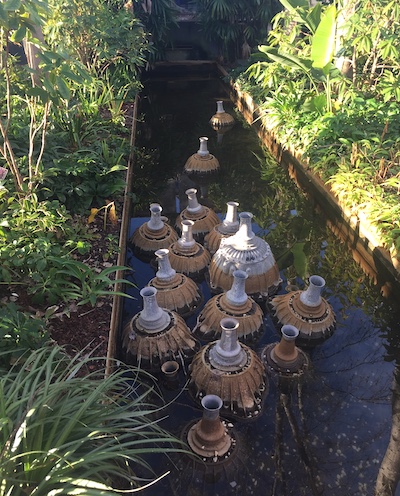 A sure hit for punters is Aaron James McGally’s Big Little Things, where the artist has punched the delicate little fairy wren into giant proportions. Created from rubbish, the message is about bringing little things into big focus.

Other commendable works include Louis Pratt’s figurative sculpture Regret, constructed from coal and a symbol of decaying at his own making; Linda Sok’s Tunnels, which echo the patterns of the Scribbly Gum (Eucalyptus haemastoma); and Natasha Abram’s simple totemic work Caution: Subject to Drought, which inverts the classic flood metre as a measure of the danger of water levels being too low. 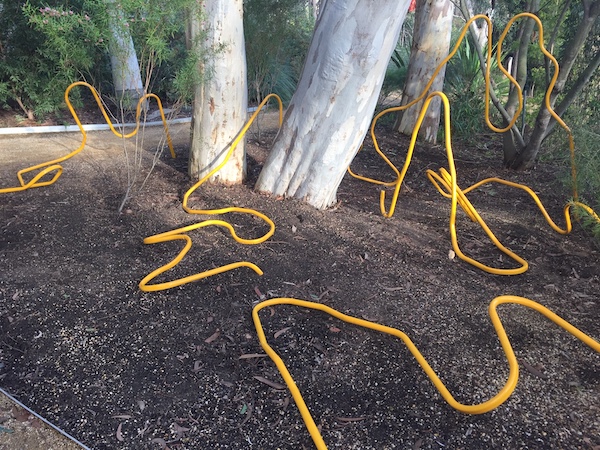 I echo the words of Allan Giddy, one of the Eden Unearthed judges and Director of the Environmental Research Initiative for Art (ERIA) at UNSW, when he says: ‘Opportunities like this, arising out of a genuine desire to support and propagate (to use a horticultural metaphor) visual art, serve both to expand the field of practice, and also to expose the general public to the latest in 21st century visual thinking.’

Viewing Unearthed I was really heartened by the embeddedness of this project to place art – and the conversations it can create – into an enterprise that is largely patronised by a conventional non-art-going audience.

Further, it is not a case of just paying a bunch of artists a fee and use their work for six months; Eden have developed an engaging program of events around the exhibition and its environmental message, as well as an online resource.

It is a great lesson to philanthropists wanting to impact change.