Lab Theatre’s two-hander explores strained and hollowed-out domesticity.
Arjun Rajkhowa
[This is archived content and may not display in the originally intended format.] 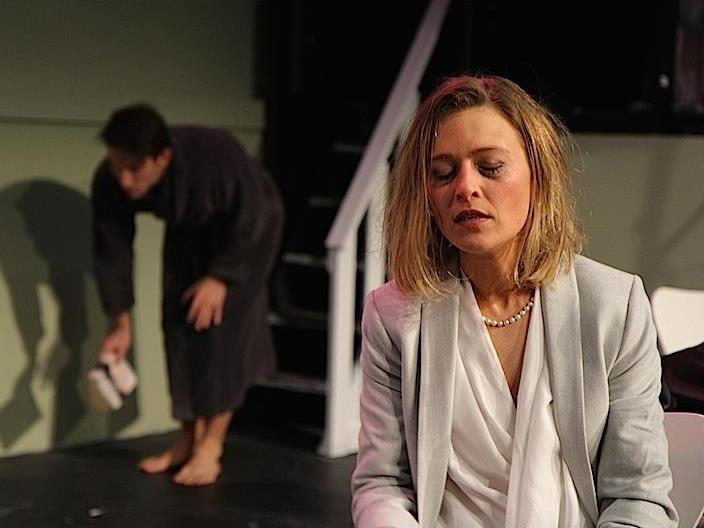 Peter Kalos’s production of Fifty Words, a play by American playwright Michael Weller, focuses on the moments that push a marriage to the edge. Set in New York, this play examines the contradictions, mismatched expectations, disappointments and hardened secrecy that beset the marriage between Jan, a former dancer and nascent businesswoman, and her beleaguered Australian husband, Adam, an architect who spends the majority of his time away on business.

The plot consists of a series of incrementally more devastating revelations – triggered by Adam’s confessions about a long-standing affair – culminating in an inconclusive moment of resignation, defeat and (possibly) forgiveness.

This production ably brings out the core themes of the play: emotional distance and mistrust; absence of intimacy; parental anxiety; and marital aggression and distress. As Jan, a woman preoccupied with her precarious work and averse to intimacy, Katherine Innes compellingly dramatises her character’s insecurity, hostility and vulnerability. Daniel Schepisi as Adam adeptly depicts a failing quest for intimacy and a desire for escape, alternating between sensuous seducer and tortured husband.

One of the more interesting things about watching this play was witnessing the audience’s reactions to the unfolding story.

When Jan rejects Adam’s advances, the audience laughed, tickled at his mounting frustration. They gasped in horror when he later lashes out verbally at her, and then whooped for Jan when she yells back at him.

These reactions reveal the polarised morality and profound sense of partisanship that underpin our feelings about marriage and relationships. Reacting to the play presumably as they would if confronted by a similar tale in real life, the audience served as a simulacrum of the social jury that determines how much sympathy the parties in a relationship deserve, and what moral codes apply in specific circumstances. Jan’s repudiation of sexual intimacy and her caustic rejections were deemed acceptable but Adam’s betrayal was not. In these moments, the audience performed their own social critique.

Schepisi’s performance relies on naturalistic technique and perhaps needs more theatrical flourish to fully achieve its potential on stage. Otherwise, his interpretation of Adam as an outwardly relaxed but inwardly tortured husband is engaging and emotionally resonant.

Innes is compelling as Jan, a promising dancer turned housewife. Dismissive, distracted, hypercritical and seemingly self-centred at the beginning of the play, Jan grows increasingly volatile as the play progresses, revealing Innes’s emotional range and skill. Innes’s performance as a provocative, provoked and highly vulnerable Jan amplifies the tension that inheres in this play.