Pinchgut Opera once again delivers a triumph in a minimal production of a rarely performed opera.
David Barmby 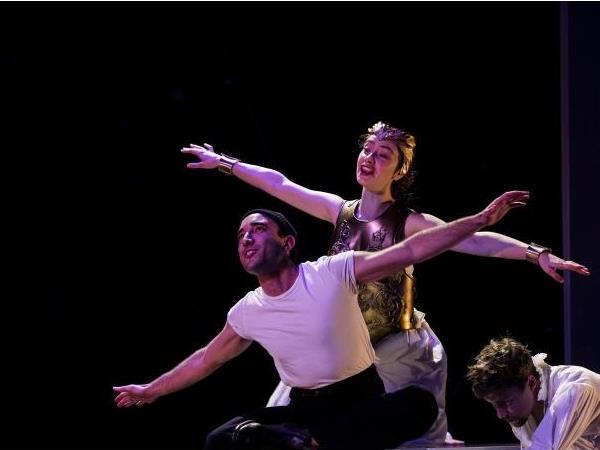 This is the third time that Pinchgut Opera has produced an opera by Renaissance/Baroque Italian composer Claudio Monteverdi, the first being his ground-breaking Orfeo in 2004 and the second L’incoronazione di Poppea in 2017. I must say at the outset that Thursday night’s opening of The Return of Ulysses was one of the most successful Monteverdi productions I’ve seen anywhere in the world. Fundamentally this is owing to artistic director Erin Helyard being granted the vision to get the cast and orchestra right at the outset. How often it is that we see important operatic productions where it seems that the conductor was the last musician hired? This experience was the exact opposite.

An acquired taste, Monteverdi’s operas are notoriously difficult to get absolutely right. His two final operas produced commercially in Venice are Il ritorno d’Ulisse in patria (Ulysses comes home) (1639-40) heard on Thursday night and L’incoronazione di Poppea (The Coronation of Poppea) (1643). They are held to be the first modern operas, but critics of his operatic work are impatient with the apparent lack of drama and heavy wordiness of the dryly declaimed text. Instead of choruses and blockbuster arias, we have blink-and-you’ll-miss-it exquisite ornamentation, subtle and daring harmonic shifts, and variety in vocal colourisation. There is little that is spectacular or ‘showy’ in this music that depends on repeated listening to fully appreciate and savour. Cast and orchestra must join to be one ‘voice’, realising its poetic narrative and expressivity in a complicated relationship of phrasing and ornamentation. Many threads weave one tapestry.

One reason this music was considered ‘modern’ was because of a new development in music theory called Seconda pratica (or Second Practice), where Monteverdi developed music on a chordal basis from the bass note up replacing the preceding polyphonic style. His operas mostly come down to us as merely a bass and vocal line with sometimes abbreviated instructions as to what instruments should be playing and what chords should be played or improvised as the singers sang. His orchestra comprised few strings that only occasionally played. The body of the orchestra was the important continuo section, very much its heart, a collection of expert improvisers of undefined quantity comprising theorbos (the large lutes with very long necks), guitars, harps, harpsichord, chamber organ and lirone/viola da gamba.

When these works were first rediscovered and performed in the 20th century, there was a body of musician/scholars who insisted that the only instrument supporting the singers should be the harpsichord as that is all the ‘full score’ stipulates. Some of the early recordings in this style are very dry affairs indeed and probably led to giving this music a bad name. More recent editions such as Rinaldo Alessandrini’s for the German publishing house Bärenreiter, as used for this production, go almost to the opposite extreme of expressive elaboration and exploration.

Placed in the closest proximity to the singers on stage, Monteverdi’s musicians acted as jazz musicians today do. They read off a ‘chart’ and responded immediately and instinctively to any subtle fluctuation in temperature of the unfolding action. Singers and instrumentalists worked literally eye to eye. This body of instrumental sound presented a constant harmonic carpet of soundscape upon which the all-important text was evoked by the singers. One could argue that operatic music has never worked with this level of dramaturgical/musical interaction ever since. 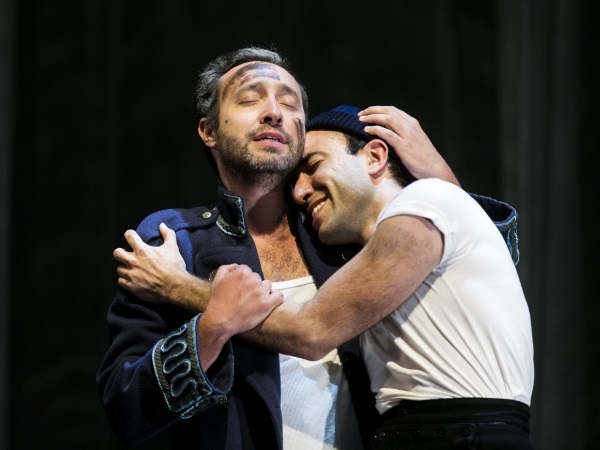 In the Pinchgut production, the Orchestra of the Antipodes was second to none, spaciously laid out before the stage and in close proximity to it. Upper strings were elegant, movingly expressive with scrupulous intonation. But it was the luxuriously rich continuo section that was the brilliant jewel in the crown: two theorbos, a Baroque guitar, an early harp, chamber organ and Laura Vaughan’s fine viola da gamba and lirone playing. Two harpsichords were provided, with one instrument raised on blocks for Helyard, who was also conducting. Their combined sound was glorious. Performance throughout could hardly be improved but for a few first-night jitters and insecurities here and there troubling rapport that will doubtless be ironed out as the season progresses.

The opera, comprising a Prologue being a dialogue between deities followed by three acts, is set to a libretto by Gicomo Badoaro based on the concluding scenes of Homer’s Odyssey, as the regal couple are joyfully reunited and the stars of the firmament are realigned. The story is fairly simple: King Ulysses, missing for twenty years since the Trojan wars and presumed dead, finds himself back in his kingdom Ithaca where faithful Queen Penelope has long been anxiously awaiting his return. Suspecting deceit, he disguises himself as an old beggar and participates in a competition with the contemptible suitors of the queen, knowing full well that only he can win. He also wishes to test Penelope’s fidelity. When he wins the competition, he reveals himself as Ulysses to the incredulous Penelope and recovers his kingdom as the regal couple are joyfully reunited. Treachery and deception are overcome by bravery and faithfulness.

The production here (Chas Rader-Shieber’s fifth with Pinchgut) was hardly a subtly graded palette. While characters and their interactions were acute and fluent, there seemed to be an incessant desire to infuse forced and unnecessary comedic elements, perhaps in an effort to assist the work’s relevance to a general audience. These annoyingly intrusive aspects robbed the central scene of the contest of suitors of its dignity, musical beauty and drama. And having the suitors dressed in underwear, tail coats and top hats was a ludicrous and irrelevant conceit, entirely misunderstanding the scene. I sensed a constant anxiety in the director of a threat that the audience might lose interest in the work, finding it too static and boring. 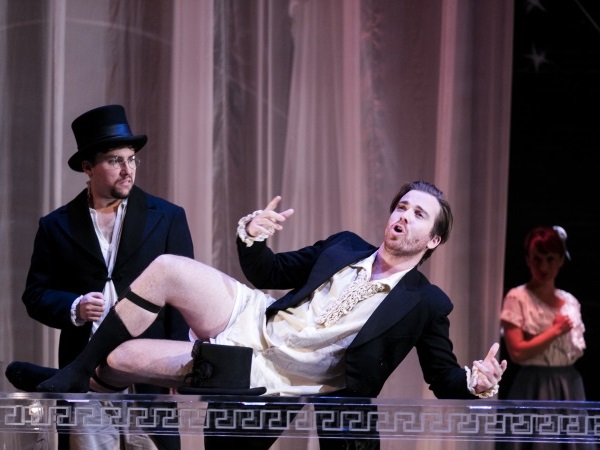 The main role of Ulysses was sung by Portuguese tenor Fernando Guimarães who is experienced in the role. His Italian pronunciation and fluency outshone anyone else on stage and his mature acting skills and deep understanding of the meaning of text impressed. His voice had an engaging range of vocal colours, but on opening night there was also often a disappointing vagueness in intonation.

Mezzo-soprano Catherine Carby as L’humana Fragilitá (Human Frailty), bass Wade Kernot as the god Il Tempo (Time), soprano Lauren Lodge-Campbell as La Fortuna (goddess of Fortune) and Roberta Diamond (a deliciously delicate and enchantingly quixotic Cupid) performed their celestial conversation with superb musicianship, only Kernot had difficulty with some of his lowest notes. The role of Penelope (Catharine Carby) is a strenuous one, spread over all three acts. Basically she suffers in misery until the concluding bars. Yet she must express a dignified constancy, sorrow, sadness and indifference throughout two hours of music. This however, she carried off superbly, her voice rich, smooth and secure with perfect tuning throughout. Her repeated Torna, deh torna Ulysses (Return, oh return Ulysses!) was deeply affecting. Eurimaco (a servant to Penelope’s suitors) played by Douglas Kelly was also strongly dramatic, his tenor expressive and his acting especially in the amorous and sensual scene with Malanto (Roberta Diamond, as attendant to Penelope) was powerfully convincing, with voices exquisitely matched.

Nettuno (Wade Kernot as Neptune) and Giove (Jacob Lawrence as Jupiter) were effectively portrayed. Lawrence presented as a particularly good actor and continued to impress as Eumete (a shepherd) while Kernot struggled with his range. Tenor Brenton Spiteri was a brilliant Telemaco (son of Ulysses), his thrilling voice and dramatic agility a highlight of the production. Greasy Iro (a parasite) was vividly carried by tenor Mark Wilde, a windbag and buffoon who particularly provided a foil for moments of immense sharp intensity. The trio of suitors, Antinoo, Pisandro and Anfinomo (played by Kernot, falsettist Nicholas Tolputt and Kelly) was superbly directed and expressively sung, Tolputt’s voice though sounding covered and underpowered on opening night.

Staging by Melanie Liertz was minimal: a crystal table and chairs were moved effectively to delineate scenes, while a semicircular sheer-fabric curtain acted as a canvas for Nicholas Rayment’s subtle pastel lighting. Costuming was adequate yet some of the long johns and undershorts worn by male leads proved to be worrisomely questionable.