There’s plenty to get your teeth into in this ambitious and confronting work from Joel Bray.
Jinghua Qian
[This is archived content and may not display in the originally intended format.] 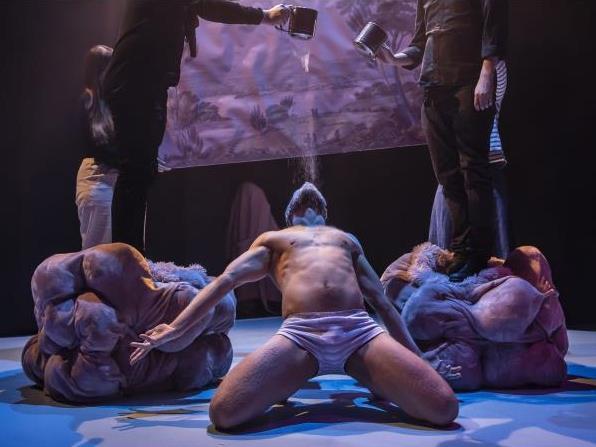 Mild panic started to set in when the box office staff advised that I would have to cloak my bags as the show was standing-room only. I usually like to research productions afterwards so that other people’s words don’t cloud my first impressions, but in this case I’d missed some important fine print in the program that fortunately was repeated in the venue signage:

As you file into the theatre, creator and performer Joel Bray is poised in the middle of the floor on a cloud of fairy floss pink wool, wearing tiny, shiny briefs. It’s a visually arresting scene. Soon, audience members are enlisted into helping Bray create a series of tableaux drawn from classical European art: some hold a backdrop while others supply props like angel wings, grapes, or a flurry of icing sugar that snows over Bray from baker’s sieves. As the show progresses, moving around the performance space, the involvement of audience members grows more extensive and intimate, with some participants licking icing sugar off Bray’s legs, wiping him down with wet towels, or cradling him in his arms and posing ready to spank him.

Audience participation usually makes me cringe but it is far from a gimmick in Joel Bray’s Daddy. Rather, it pushes you to face your own relationship to the material, to consider your own complicity or inaction. Like much of Bray’s work, Daddy draws on his experiences as a fair-skinned gay Aboriginal man. Bray brings you close, uncomfortably close, to nearly every shape and flavour of pain: grief, loneliness, shame, futility, abandonment, sexual and cultural inadequacy, and as the title promises, daddy issues. The experience is either excruciating or exhilarating, or perhaps a bit of both. Sugar and kink – entwined in this production – are apt metaphors for the crash you feel after the intense physicality of this performance.

Bray is a powerful and precise dancer who has worked extensively with Chunky Move and various dance companies overseas. The immersive, participatory format of Daddy is both startlingly contemporary and drawn from his Wiradjuri heritage. As Bray’s website explains: ‘Rather than attempting to recreate a supposed Indigenous “form”, his methodology is rooted in traditional Wiradjuri ways of making work, namely durational, site-specific and cross-genre processes. His works are intimate encounters with small audiences in unorthodox spaces, in which audience-members are “invited in” as co-storytellers and co-performers.’

Earlier this year, Bray’s Biladurang brought audience members at Dance Massive into his hotel room for what was billed as a ‘confessional solo’. Daddy is similarly confessional and confronting in both words and movement. The story touches on colonisation, child sexual abuse, broken legacies, and yearning; the movement is controlled, frenetic, taut and devastating. Bray moves among us, hurting, struggling, raw and reaching, and it feels we should intervene. Moments of levity and humour seem to interrupt rather than break the tension – a dusting of sugar over a deep well.

As you exit the performance space, it’s all still there: the ennui of being a gay man in an era that promises instant gratification but keeps delivering something slightly insubstantial. The rage at the machinations of Australian racism that keep evolving new ways to erase and deny Blakness. The blunt ache of missing the connections you crave. The empty sweetness of nostalgia. All this remains unresolved and we leave, sticky with this mess.