In his keynote speech at the recent PAC Australia conference, Dr Richard Walley OAM urged arts leaders to step back and let First Peoples set the cultural agenda.
Richard Watts
[This is archived content and may not display in the originally intended format.] 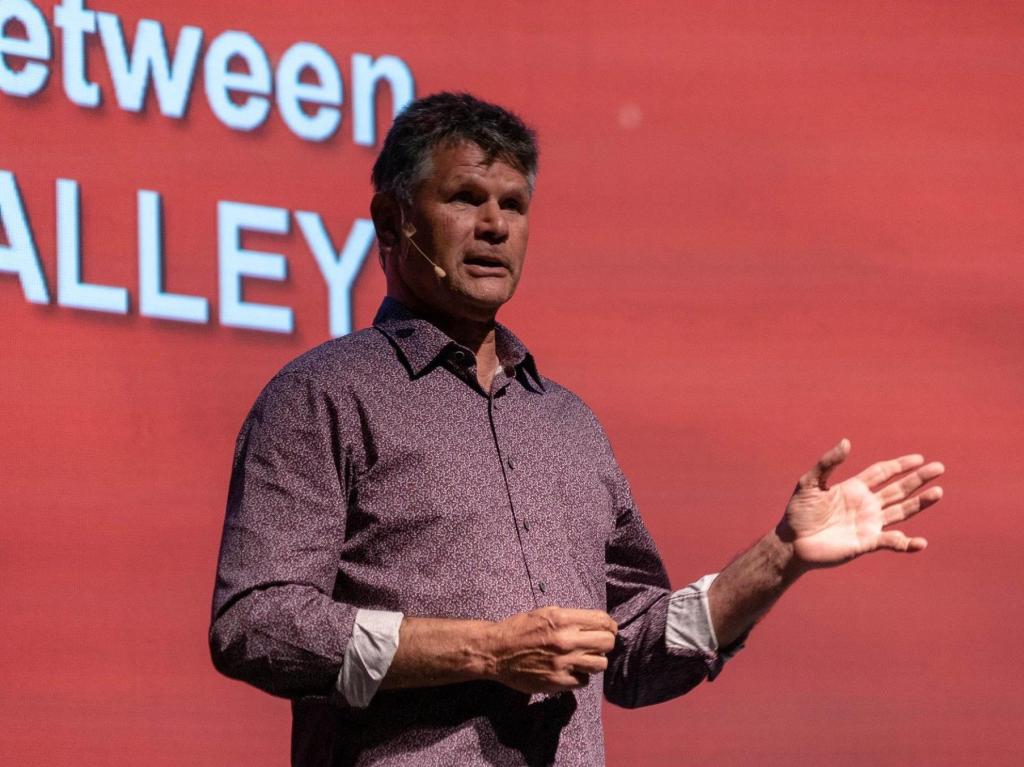 ‘Theatre is a powerful tool. Theatre can actually get the stories out that people are afraid to talk about. Theatres and the arts are the forerunners, the frontrunners, to any revolutionary change,’ Dr Richard Walley OAM told delegates at the recent Making Space conference in Karratha, WA.

Walley, a Nyoongar man from south-west Western Australia, is one of Australia’s leading Aboriginal performers and writers. A former Australia Council Board member, he was named a State Living Treasure in 2015 for his lifetime contribution to arts and culture in Western Australia.

As part of his keynote address at the Red Earth Arts Precinct, Walley urged members of the sector to become followers, not leaders, when it came to working with Aboriginal and Torres Strait Islander artists.

‘People still ask us, “Let’s walk side by side.” I’m sick of walking side by side. I’m definitely sick of walking behind. I wouldn’t mind sometimes if people just stood back and said “Let’s follow you for a while. Let’s have trust in what you can actually do.” That’s the challenge … regardless of who we are.’

By stepping back and allowing Aboriginal people to lead, the arts sector can help set a national agenda, Walley said, citing the now-common practice of having a Welcome to Country at the beginning of Australian cultural events.

‘My first role at the Australia Council was to make sure that any writer, director, anyone of these artists that wanted to get involved with Aboriginal communities had to talk to them first and get permission from them. Talk to them, get welcomed in. That became a part of our criteria … So what we did was we took that and said, “You must be welcomed into that world,” so the arts world was the one that started that Welcome business … The politics  and the business and everyone else followed. So I firmly believe that a group of people speaking about the arts world can change the world – because you get those stories out,’ Walley said.

Letting First Peoples lead is imperative if we are to see lasting cultural change in the Australian arts sector, Walley continued.

Part of this process involved giving First Peoples artists the power to tell their own stories on their own terms, he continued.

‘And control is directing, editing … not the co-director or the director in training.’

As part of this process of self-determination, Walley challenged the sector to give companies such as Yirra Yaakin and ILBIJERRI the same budgets as their non-Indigenous peers.

‘So the challenge now is to say, “Okay, we’ve got a little theatre company,” and I’ll pick one, and okay I’m biased because I’m a patron – but you take the Yirra Yaakin Theatre Company. “Yirra Yaakin, we’re going to give you the same budget as the top theatre company in this state. You can have access to the mainstage. How many productions are you going to produce?” That’s what I’d like to see – a bit of trust.

‘I’d like to have Rachael [Maza]’s theatre, ILBIJERRI – “here’s your budget, here’s access to the mainstream theatre, what are you going to produce? Let’s put a season together.” That’s what I’m aiming for. Thirty years we’ve been aiming for it. The challenge is, are we as a collective of Australians today ready to get going with that movement?’

Walley also called on the sector to focus on the unique nature of Aboriginal art when representing Australia to the world, instead of trying to export second-rate reproductions of European art forms; to innovate instead of emulate.

From the archives: Do we need a National Indigenous Theatre?

He continued in this vein by drawing connections with Australia’s recent past, including the First National Black Playwrights’ Conference, held in 1987.

‘Jack Davis believed, 30 years ago, that in 10 years we would be running our own theatres. Thirty years later we’re still waiting. The reason we haven’t achieved it? I firmly believe that Australians now are starting to realise that they’re holding a lot of our iconic images, our iconic brand to the world, back.

This article is based on Dr Richard Walley’s keynote speech, ‘The Spaces in Between,’ presented at the PAC Australia conference and performing arts exchange in Karratha, WA on Wednesday 5 September.

Richard Watts travelled to Karratha with the assistance of PAC Australia.