topical Arrivals theme exploring notions of migration to Australia by boat.
Mariyon Slany
[This is archived content and may not display in the originally intended format.] 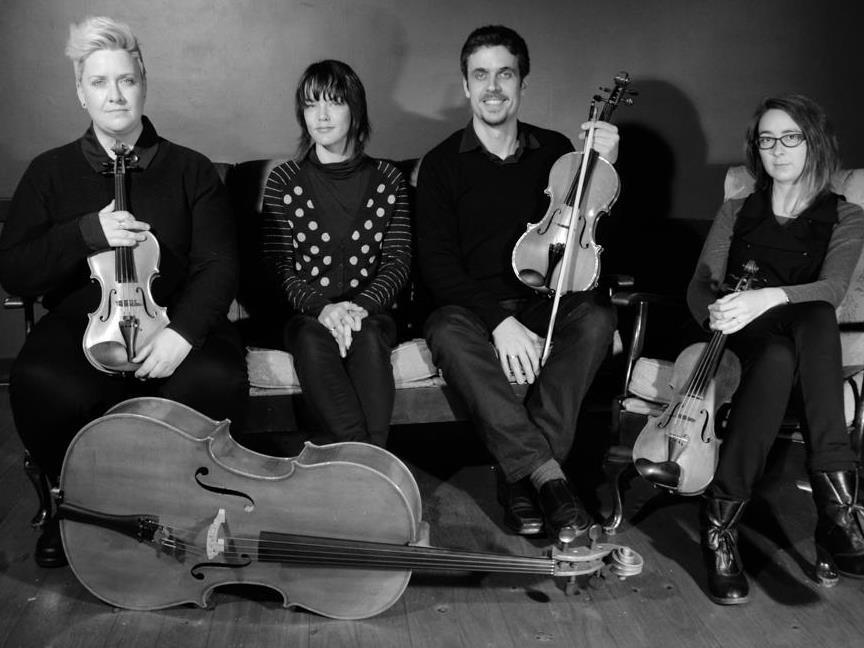 Enhanced by the setting of the WA Maritime Museum – with frolicking dolphins playing beyond the boat decking outside the windows; huge International Transport containers bearing down on us with multi-storied flashing lights escorted by the tiniest tug boat. Inside the Zephyr Quartet grabbed us with beautiful sounds and exemplary audience engagement. The only complaint was the small audience there to appreciate the topical Arrivals theme exploring notions of migration to Australia by boat.

Adelaide based Zephyr Quartet have done two shows in WA – part of last year’s PIAF and also a Perth Fringe Show – and quality musicianship such as this deserves a bigger audience.  Forming in 1999 after their studies Belinda Gehlert, Hilary Kleinig, Emily Tulloch and Jason Thomas have had an adventurous spirit in exploring a range of art music to achieve a ‘firm belief in the power of the string quartet as a medium to communicate and explore complex relationships between society and art’.   There were world premieres of a number of works composed by members of the quartet, namely Hilary Kleinig, Emily Tulloch and Jason Thomas.  This new to my ears repertoire was stimulating and showcased the quartet’s interest in innovative music.  The passion in which this group approach their music making was clear (despite the often ethereal whispery sounds emanating in the much used harmonic interplays from all four instruments).

Overall the repertoire ranged from pop inspired work with Iraqi born Motez to the more formal string quartet 4 movement style of Paul Stanhope String Quartet No. 2.  Energetic pizzicato and soulful strands of Nyman inspired loops of repetition –this was a strong structural theme with expert musicianship on display by the four musicians.  The atmospheric work by the quartet’s cellist Hilary Kleinig Great White Bird optimised place, sound and sight as we were perched at the front of the Maritime Museum staring out at the flying mass of sea birds, water movement and the ‘Fremantle Volunteer Rescue’ boat zipping around.  The beautiful light touch of the musicians worked fantastically with this evocative composition, creating a site specific music composition.  Another memorable work was by Kate Moore Broken Rosary (2010), memorialising her Dutch grandmother and the childhood event of breaking her rosary.  It had soaring cello and sliding harmonics that clearly spoke of broken connections to the past, as the players were silhouetted against the inky blue/pink skyline and the syncopated 5/4 rhythms echoed a rocking/swaying movement.

Interpretation of other composers’ works was moving and tender, particularly evident in the complexities of the 2009 composed Paul Stanhope work.   This beautiful work pays homage to Czech composer Pavel Haas who died in the Auschwitz death camps and those who managed to flee persecution such as scientist Gustav Nossal and Richard Goldner who helped establish the beginnings of Musica Viva in Australia.  It echoes the old and the new – departures, immigration and arrivals – with the interpretations of slow introduction, variations, scherzo and finale movement.  Again the sonorous cello work by Kleinig evoked the lament of departures. The call and response in atonal contrasts allowed us to empathise with the forced losses of country and friends.  The last movement were incredibly well coordinated showing the practised ease with which they work together, and finally some Middle Eastern inspired dance echoes felt like a farewell to the old country.

The composition of viola player Jason Thomas Mulysa was tightly crafted. This was inspired by his work at Australia’s processing centres in Naura and used Tamil folk songs as inspiration.  The percussive use of the string instruments along with soaring themes starting with cello and concluding with beautiful viola playing brought the work full circle.  Again the careful playing rhythmically intersecting ostinatos or shifts in major to minor keys highlighted the seamless playing of the Zephyr.

The experimentation in Fly Dove, originally written in the 1950’s by Carlo Concina and arranged by Emily Tulloch did not always work.  We needed more of the theme of the original song performed by Nilla Pizzi before deconstruction. It used recordings from immigration officials in the early 60s to welcome immigrants to Australia, along with a bit too much cooing dove.  In this case the program notes evoked a number of immigration and longing stories that weren’t fully realised in the musical actuality.

The latter two works in the performance were not the strongest. Beginning’s by Motez and the Quartet relies too much on a recorded drum beat to be fully appreciated; and in fact the pop/hip-hop elements drowned out the subtle workings of the quartet.  The quartet has allowed itself to be another string quartet accompanying a pop song with this somewhat schmaltzy rendition. In the penultimate work Hilary Kleinig is to be applauded for her efforts in engaging the audience with iPhone interaction in For those who’ve come across the seas but ultimately it felt that was distracting away from listening to the work by having an ‘iPhone choir’ accessing the pre-recorded sections.  The Morse code signals and Kyrie-Eleison (Lord Have Mercy) singing voices coming through help with the sound swell.

The intimacy created in this beautiful space made it worth while to come out on a Sunday.  The clear explanations in the program contextualising the writing of new music pieces help bring their audience along with them as they work on re-inventing the genre of string quartet music for a contemporary generation.  Zephyr Quartet do this brilliantly and the excellent musicianship, nuanced phrasing and universally great performances, ably led by first violin Belinda Gehlert and directed by cellist Hilary Kleinig in the engagement with the audience show the careful thinking and deliberate planning of the program which optimised this lively night of contemporary classical music making.