War and Peace relies less on the novel’s plot than a philosophical derailment.
Sally Hussey
[This is archived content and may not display in the originally intended format.] 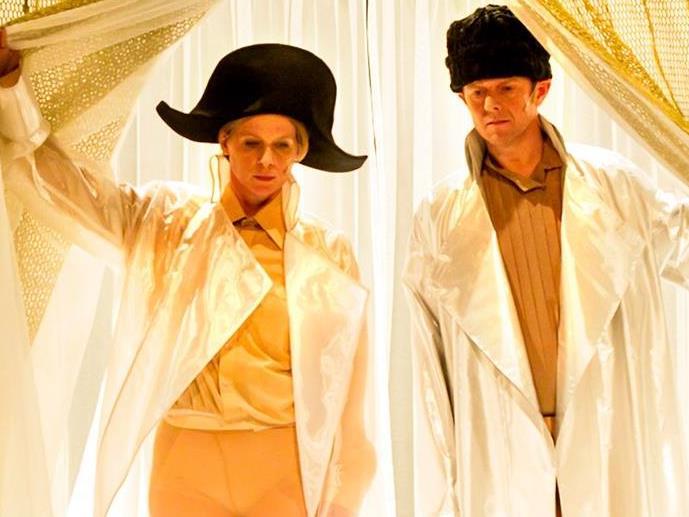 Berlin-based collective Gob Squad squeeze their loose adaptation of Tolstoy’s War and Peace into a one hour 45 minute production that relies less on the novel’s plot than a philosophical derailment.

Russia’s high society – Anna Pavlovna’s St Petersburg soiree – is rendered by a salon that anchors the production, where theatregoers are selected pre-performance to participate in the live-action tableau. The loose structure is established as audience members taking their seats are announced by a dinner bell, three of whom are seated at the ‘salon’. Equally, cast members playing themselves (Sean Patten, Tatiana Saphir, Sharon Smith, Bastian Trost, Simon Will) are introduced through their ‘dynasty’s’ that mimic the codified culture of Tolstoy’s tome, where intentionality of self-representation is met with mirth (‘Sharon Margaret Smith Phd’ is the progeny of ‘uneducated heathens’).

The production is a playful yet pointed mishmash of Tolstoy’s narrative and dialogue, with seemingly whimsical questions posed to audience participants. ‘Tolstoy’s dance of history’, at times, reads like a potted history, alerting the audience – in the main area unfamiliar with the novel (verified by a raise of hands as to how many have read the novel) – to its facts and neologisms. It also abridges Tolstoy’s hundreds of characters into walk-on introductions that culminate in a fashion show, wherein cast members enact a rotation of personas barely touched upon in the staccato-like abbreviation. The novel’s passing through the minds of character-to-character is also condensed in its theatricalisation, entering a diaphanous central pod that also serves for ‘backstage’ discussions between Napoleon and the Tsar.

The linguistic turns of the salon; conversations are at times corralled into hollow warring opposition – the similarity of words in Arab and Hebrew, for instance – echoed in the epilogue of ‘equally correct/equally false/east to west/west to east.’

But desultory dialogue, at times seemingly inconsequential, grows with the performance’s rapid pace and the cast’s nimble ability to riff on audience-participant’s unscripted responses. Here, the production’s structural shakiness works in its favour. But it gradually cedes to senseless mirth. The ethnographic references – Pauline Hanson’s walk on; the leading joke, ‘what’s the difference between Australians and yoghurt? At least yoghurt starts with a little bit of culture’ – are baseline audience entertainment. And, in the production I attended, the participant theatre reviewer’s sudden gendered exposé of the first three letters of the word ‘history’, while met with some applause, draws attention to a fault line in the seemingly structureless production.

Yet two decades of Gob Squad productions precede War and Peace, which is less mired in literary codification than distilling its relevance in a hyper-digitised world. Fore, middle and background screen projections simultaneously disengage and engage audiences in a meta-theatrical impossibility. Questions of humanity, where Moscow is to be invaded by French troops, Natasha says ‘leave our stuff and take people instead’, seamlessly segue into the fact that refugees bringing only a mobile phone. In the French invasion of Russia, Napoleon can signal a brandy and Russia a vodka sitting side-by-side on the salon table, screen projected in an easily recognisable, transferable digital iconography.

The sheer cleverness of the conceit of Gob Squad’s War and Peace is that the work is not mired in literary forbearance. But talks to our hyper-digitised world.  Leading the audience participants to state we are in a time of ‘peace’, the concept of war speaks to the notion that much of what we know of war – since the invention of the daguerreotype in mid nineteenth century – is based on the visual – photographs, televised images – that are framed and distributed as entertainment.

Gob Squad approaches Tolstoy’s War and Peace via an almost cinematic arc that allows for climax and digression. Echoing their previous production Western Society, which centered around the least viewed video on YouTube, War and Peace takes the novel’s most derided last sentence to be recorded on mobile phone during the performance. Recording the 9th to last word, at the performance I attended, the word was ‘and’.  The collective enunciation of the conjunction, joining together an audience voice, was not lost on its intention. Replayed, along with the previous performances, while it can signal an inbuilt nostalgia, or disembodiment, reaches toward an improbable or impossible collectivity that reads history forwards and back.

Sally Hussey is a Melbourne-based writer, curator and independent producer.