At Last The Etta James Story

Vika Bull has one of the best voices around; an instrument of sweetness and power.
Victor Kline
[This is archived content and may not display in the originally intended format.] 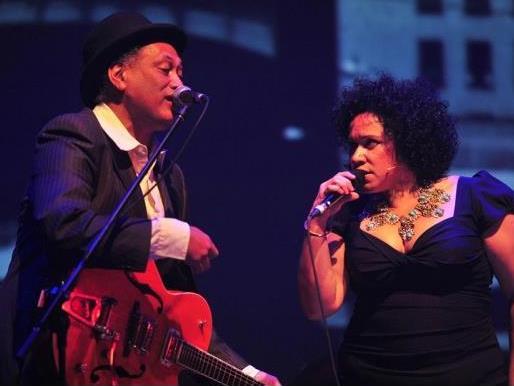 Image: the Essential R & B Band and Vika Bull in At Last The Etta James Story photograph courtesy Room 8.

Vika Bull has one of the best voices around. In fact it’s more than a voice. It is an instrument of sweetness and power. Rarely does a singer have such effortless control over everything she wants to achieve with her voice. It’s almost as though she whispers to it in the night, promising it whatever it wants, if only it will give her whatever she wants. It says ‘Yes’. First of all the range is extraordinary. Then the timing, if you bother to listen for it, is whispering precision. I say ‘if you bother to listen’ because if anyone gets their timing and their modulation that good, no-one thinks to listen. There is no reason to listen. That’s the point. It’s effortless, and no-one notices just how skilful and clever the singer is.

I was thinking all through just how close her tones and her timing and her choices are to those of Etta James herself. So I was not surprised to hear Vika say, towards the end of the show, that Etta James had been her hero since she was 18 years old. She says she’s been copying her idol ever since. But I think the student has surpassed the master. Etta James has the power, but she can’t match Vika Bull’s sidestep and change of pace, not to mention her haunting sweetness.

Room 8 were very clever to get Vika to play the role, and they were equally clever with their choice of musicians. John McCall is exceptional on keyboards, as is Dion Hirini on guitar. But they are all virtuosi. And they can all sing. Musically the ensemble is near flawless, and the producers are to be congratulated for that.

What they are not to be congratulated for is their choice of writer and his tedious, cliché ridden script. In fact I didn’t know anyone could get that many clichés into one sentence. Every time Vika Bull or Tibor Gyapjas open their mouths to narrate another piece of The Etta James story, a cascade of clichés pours out. This isn’t helped by Simon Myers blocking, which makes sure they are put in the most awkward and clunky positions to deliver their sophomoric nonsense. They are not actors and shouldn’t be asked to do something they are not equipped for. Gyapjas is a brilliant trumpeter. Bull a peerless singer. Leave it at that.

I know most people won’t care. They are there for the music. But for the handful of people who think a show should be a professional show in all departments, it is frustrating. The worst part of it is that the script isn’t necessary at all. James had a tacky life, knowledge of which only detracts from her musical genius. And writer John Livings amateurish attempts to revel in its tackiness one minute, and apologise for it next, is just plain sad. If James’ story has to be told, do it with pictures that highlight the glories of her career. I would love to give this 5 stars, but Livings and Myers have gone to great lengths to hatchet away at least one star.

At Last: The Etta James Story