Beautifully staged, beautifully designed and beautifully performed; a strikingly contemporary imagining of a modernist classic.
Adelaide Fisher
[This is archived content and may not display in the originally intended format.] 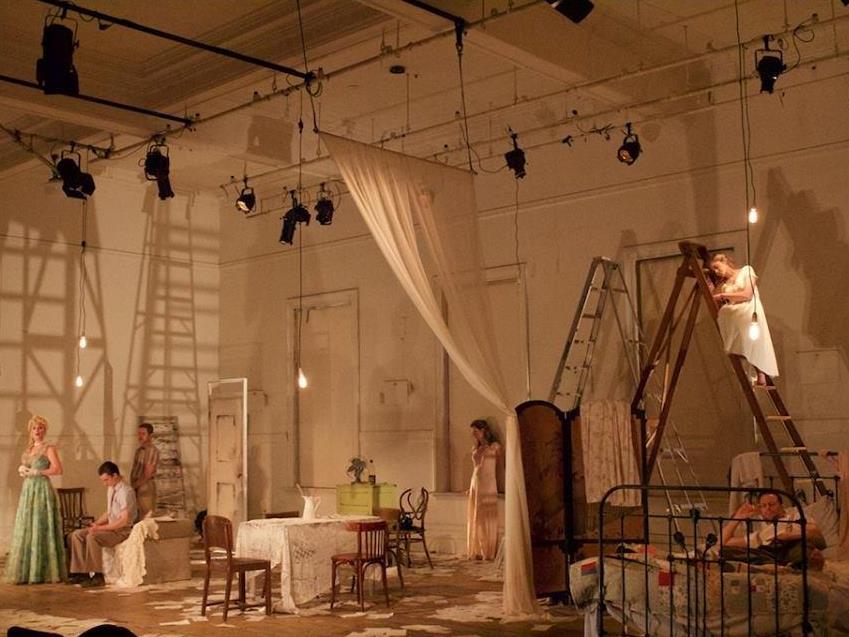 The festival launched on Wednesday night with the opening of Project: Hysteria; a beautiful, powerful, and moving piece of theatre that is much more developed and fully realised than one would normally expect from Fringe-style shows. The production has a powerful and cohesive vision which is pulled together across lighting, staging, costume design, sound design, direction and performance. From the moment the audience enters the space, they are completely immersed in the vision of the show.

Project: Hysteria is the umbrella title for the two short, one-act plays by Tennessee Williams, The Pretty Trap and Interior: Panic. The two plays are presented back to back and yet, like the artistic vision of the play, there is a cohesion to the whole. All eight performers remain on stage in character throughout the duration of the two plays and continue to move about through the space, playing out their struggles regardless of whether they are in the spotlight. By the time our attention is drawn to the characters in the second play we already feel intimately acquainted. Similarly, the drama of the first play continues to play out in the shadows of the second performance.

The production is true to the original time and place of Tennessee Williams’ classic modernist texts. Sumptuous costumes and flawless Mississippi accents clearly situate the action in the American South of the Great Depression. However, the strikingly contemporary production makes the performance feel important and relevant to contemporary audiences by exploring themes which are common to all people of all times and places. The set design uses Depression-era furniture as points of punctuation in a dreamlike environment where doors stand alone without walls and space is established and dissolved by lighting. Even the actors do not obey the implied logic of the space; after an extensive conversation about who will open the door, the two characters stroll into the space via other means once the door is opened for them.

In many ways, the contemporary production choices bring what would once have been subtext to the forefront. The sexuality, tension, and denial smoldering under the surface of Williams’ words are all brought to centre stage as the characters act out their emotions, desires, and fantasies for all to see. Their vulnerabilities remind us of our vulnerabilities, and as we love and forgive them, there is a sense of loving and forgiving ourselves. Occasionally a few lines were difficult to make out because of the emotion of their delivery but overall the performances were excellent. In particular, Trudi Boatwright as Amanda Wingfield and Annie Last as Blanche Shannon are stunning as the female leads successfully negotiating the pathos of their characters without lapsing into melodrama.

The production’s director, Alister Smith describing himself as “obsessed” with William’s work. However Project: Hysteria does not require any prior knowledge of the famous American playwright or the famous texts which The Pretty Trap and Interior: Panic seem to foreshadow (The Glass Menagerie and A Streetcar Named Desire respectively). Project: Hysteria is just as rich and enjoyable as an introduction to the works of Tennessee Williams as it is for diehard fans and will appeal equally to lovers of classic theatre and cutting edge contemporary performance.