It’s clear that a lot of hard work and research has been poured into this cretaceous creation.
Sofia Monkiewicz
[This is archived content and may not display in the originally intended format.] 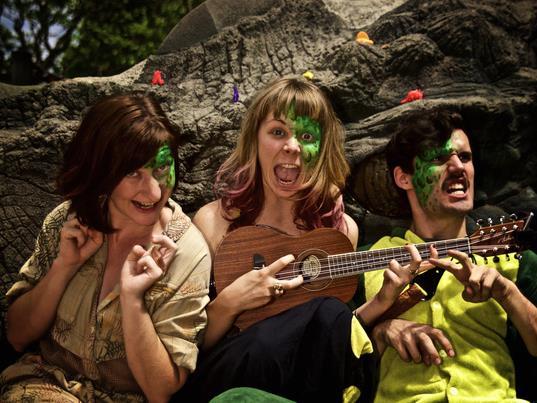 Tom-Rex (Tom Albert), Tri-Caito-Tops (Caitlin Armstrong) and Elo-Opteryx (Eloise Maree) are three energetic dinos who want to share their tips and tricks on experiencing extinction, and they do so with the help of original songs and hip dance moves. Dancing with Dinosaurs is a quirky show that provides a new perspective on the demise of the dinosaurs, and successfully attempts to make mortality fun.

La Mama Theatre is truly transformed into a desolate post-extinction environment, with a dimly lit, smoke-filled stage, and large craters on the ground. After an introductory scene involving a booming voiceover describing the phenomenon that is Planet Earth, the brightly clad trio launch into a song about inevitable death, complete with wild eyes and a super cheerful dance routine. The entire play is essentially made up of a series of hilariously dark tunes. It is surprisingly historically accurate, and it is clear that a lot of hard work and research has been poured into this cretaceous creation.

Armstrong is a kooky delight, and has the most incredible stage presence. The dopey persona she portrays with her peanut-brained triceratops character is hilarious, her flexible facial expressions the star of the show. Her strange accent is endearing, and in one particular song she lets her true voice shine through and it is simply lovely. Eccentric and confident, Albert is a strong performer as Tom-Rex. The unspoken leader of the group, he divides his time between the spotlight and pounding away at a keyboard tucked away under the stairs. His showmanship is brilliant, and his creepy tale about a cannibalistic T-Rex is very funny. He ensures that the Barney the Dinosaur television theme song will never be perceived in the same way again. Maree plays the ‘original chicken’ as Elo-Opteryx, and is a fierce and talented actor-singer-dancer combination. She has some great one-liners, a harmonic set of lungs, and an impressive ability to transform a mere sock puppet into a fully-fledged dinosaur.

The performance includes an entertaining version of Jurassic Park, a dinosaur versus religion ditty, and is actually quite educational; an in depth lesson on the size of the universe is comical and informative, while you also learn an extensive amount about dinosaur genitalia, whether you want to or not. Director Daniel Czech has pieced together a tight and lively play that just makes you want to get up and dance along with the on-stage lizards. The solid effort from Tech Raptor Imogen Titmarsh is also to be applauded, as she deals with never-ending lighting variations and effects, constant song changes, and the sporadic use of a smoke machine.

Fast-paced festivities combined with some morbid dialogue have formed the funky show that is Dancing with Dinosaurs. The recurring theme that life is temporary and that anyone can die at any second is quite jarring, but the way in which it is delivered just makes you want to make the most of the time you have left on this ever-changing planet. Combine that invigorating thought with a whole lot of rowdy beats and disco-dancing dinosaurs, and you’re going to have a good time.