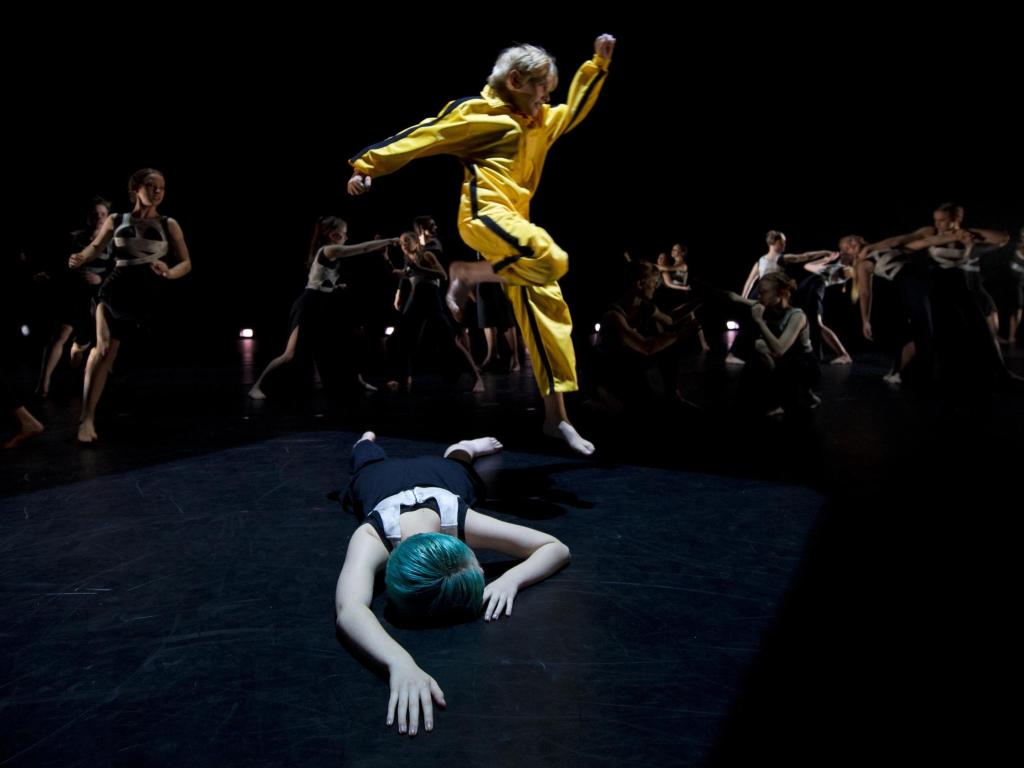 Working with the theme of Fights and Flights, and developing techniques from the martial art of Kung Fu as well as working with experienced choreographers, STEPS presents an hour of eclectic insight into child and adolescent development through dance. The intensive process of workshopping and rehearsal shines through, with a constantly changing dynamic that not only showcases the stunning skills of the guest performers but allows many of the young dancers their own time in the spotlight.

Starting with a Kill Bill inspired fight scene, the fight-themed performances range from disciplined Kung Fu patterns to sparring drills and evocative portrayals of internal anguish. Making use of the generous stage size, many fight scenes gradually morph into ‘flight’ portrayals, with groups of other dancers moving, sometimes like flocks of wild creatures, across the stage and away, around and to the periphery from the central figures. The influence of a range of choreographers is apparent, as is each individual young performer’s enthusiasm and ownership of both the stage space and each element of movement.

The massed formations of the three cohorts of youth dancers, working together more than separately in this production, and a rolling showcase effect of solo and paired dancers means that no particular STEPS member stands out, but it is notable that each and every spotlighted performer seizes their moment without hesitation, grabbing attention and fully occupying the movement. The confidence across the board is amazingly impressive, and when some pieces feature senior company members paired with guest dancers, it is sometimes a double take to realise that it is not two professional performers matching each other. The closing movement, dance behind a direct-to-audience monologue, is wrenchingly honest yet inspiring, a celebration of youthful resilience.

The returning STEPS alumni do not disappoint, individually and together indicating the potential for development of the current crop of young artists. Tyrone Robinson’s awesome flexibility and physical control work well with James O’Hara’s fluid movements, and all guest artists display breathtaking strength and compelling poses. Working alone, together and with the STEPS cohorts, their experienced skills bring a further dimension to the intense immediacy of the performance.

Costuming complements the changing moods and movements, with the various changes not distracting from the main event. Trent Suidgeest demonstrates his mastery of the venue’s technical potential and an awareness of the particular requirements of the art form, utilising a descending set with partially mirrored base to create further changes in framing and dimensions from scene to scene, and a matching lighting design that utilises shadow to enhance the changing moods.